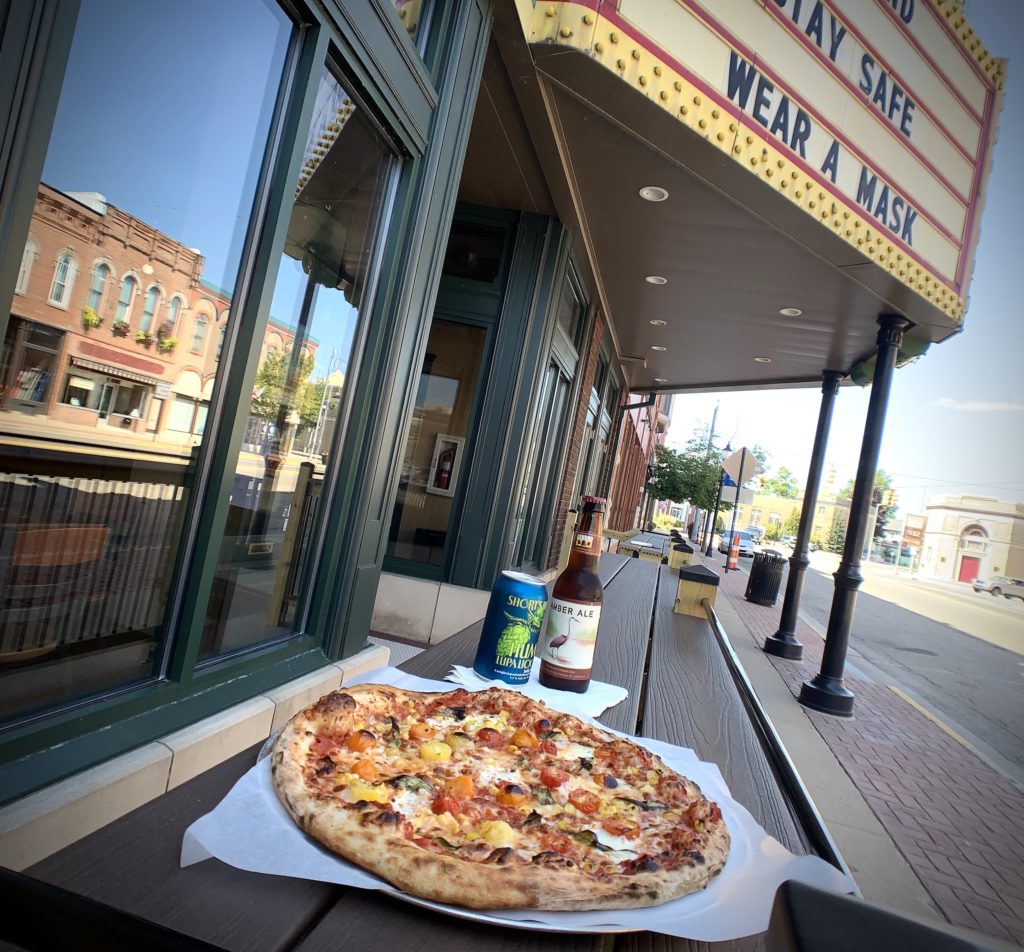 When the Riviera Theatre Bar reopens this Wednesday, it will offer a new feature: sidewalk seating. The bar occupies part of the historic Riviera Theatre’s storefront on Main Street in downtown Three Rivers. After a prolonged shutdown amid pandemic restrictions, the bar is taking advantage of new state rules that permit it to have outdoor seating on the sidewalk just outside its front door.

Although the theatre itself remains closed, the bar will be offering food and drink for carryout and for consumption onsite. Hours will be from Wednesday through Saturday from 4:00 to 10:00 p.m., Executive Director Danielle Moreland said.

The menu will be expanded with several sandwiches and dessert options. It will also continue to include its range of popular, old-world-style, artisanal pizzas, including a seasonal special. There will be drink specials in addition to food, and the carry-out drink options will also be expanded from what was previously available.

“It’s going to be fun,” Moreland said. “We’ve always been able to do our beer and our wines to go. Now, through the Governor’s Executive Order, we can offer our cocktails to go as well. We can send out all kinds of great things with people who want to eat and drink in the safety of their own homes.”

Some of the to-go cocktail options will be like “juice boxes for adults,” Moreland said.  “There’s going to be a sangria one, a watermelon one, a pineapple one, and a couple of others.”

Moreland said the sidewalk seating outside is extremely limited, and is available on a first-come, first served basis. “If demand picks up, we may look at doing reservations, but in the meantime, as we figure this out, we ask that patrons be patient and kind with our staff,” Moreland said.

The bar opened briefly as pandemic shutdown restrictions were lifted in early July but was forced to close again after an outbreak at an East Lansing bar prompted the Governor’s Office to issue an Executive Order that re-closed many bars.

Subsequent, new rules from the state have permitted additional options for outdoor seating. The City of Three Rivers endorsed the Riviera’s application under one such option last month, after which Moreland and her staff had to have plans approved at the state level. Other downtown establishments are looking to reopen under similar rules and arrangements.

The new seating at the Riviera has been under construction for the last few weeks. Once it is open on Wednesday, patrons will be able to order food and drinks inside and consume them within the outdoor seating enclosure, looking toward the historic storefronts across the street.

As with all bars and similar establishments, outside food and drink will be prohibited on all indoor and outdoor parts of the premises.