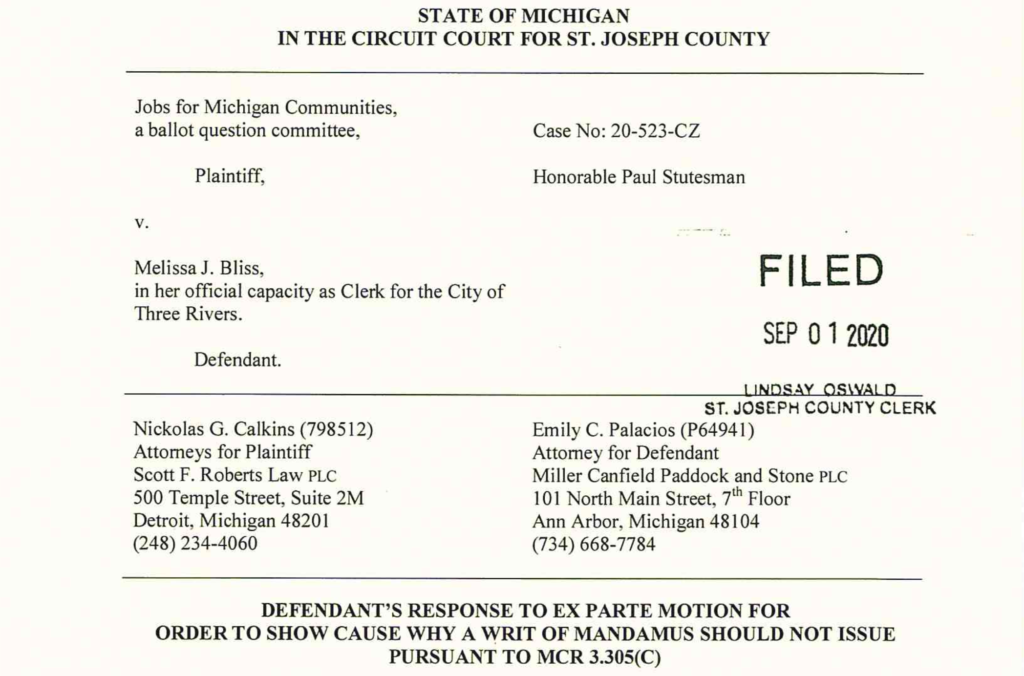 Documents obtained by Watershed Voice Tuesday show additional details on the lawsuit filed in St. Joseph County Circuit Court last month pertaining to a petition on a Three Rivers marijuana ballot initiative. Jobs for Michigan Communities (JMC) submitted petitions to City Clerk Melissa Bliss in late July to place two initiatives on the November ballot. One initiative would establish an amendment to the City Charter permitting marijuana businesses, and one would establish language in the City Code doing the same.

After consulting with an outside law firm, Miller Canfield, Bliss and the city’s Board of Election Commissioners rejected one of the petitions on August 7. In documents previously acquired by Watershed Voice, JMS said the rejection letter stated the petition exceeds the size mandated by Michigan law, is not limited to the subject matter permitted under the Michigan Regulation and Taxation of Marijuana Act (MRTMA), and “proposes, in part, administrative determinations (as opposed to legislative actions) that are not the proper subject of an initiative petition and are contrary to State law.”

The suit filed by JMC on August 17 seeks a Writ of Mandamus requiring Bliss to canvass the petition’s signatures, and if a sufficient number were submitted, to certify the petition and include it on the November ballot. The suit also seeks declaratory judgment by the court stating that the petitions are fully compliant with the MRTMA.

On August 25, 45th Circuit Court Judge Paul Stutesman gave Bliss until Tuesday, September 1 to submit documents responding to JMC’s suit documents. Those response documents arrived just before Stutesman was to begin hearing arguments from defense and plaintiff’s attorneys on the case. Because of the volume of information contained in both the lawsuit documents and the plaintiff’s response, Stutesman postponed arguments one week, until September 8 at 1 p.m.

In the meantime, Watershed Voice obtained the documents filed for the defendants by Bliss’s attorney, Emily Palacios. Those documents include a longer brief detailing the defense’s case, as well as an item-by-item response to the complaints contained in the plaintiff’s motion for a Writ of Mandamus.

In the brief, Palacios argued the petition exceeds the scope permitted under the MRTMA “because it is not limited to providing for the number of marihuana establishments in the city.”

She wrote the petition also proposes a municipal licensing scheme. Under the MRTMA, she wrote, an individual may initiate “a petition that does only one of two things: either (i) ‘provide for the number of marihuana establishments’ or (ii) ‘completely prohibit marihuana establishments.’” The details JMC provided, Palacios wrote, cover administrative rather than legal actions pertaining to establishing a potential number of businesses, and are therefore outside the scope of what the law would permit in a petition.

In its complaint, JMC argued the extra language was necessary for the purpose of establishing the number of establishments that would be permitted. Palacios said including the language for that reason, and for “persuading a diverse electorate with competing interests that the proposal merits approval,” is a political rather than legal consideration, and therefore invalid.

She argued the MRTMA already has provisions in place to help municipalities establish the number of businesses it will allow and other parameters, and that other JMC arguments in favor of the licensure language seek to mitigate problems that do not actually exist under the MRTMA.

Because she said JMC’s complaint does not successfully argue in favor of the petition’s language, and due to the argument that Bliss already canvassed the signatures correctly, Palacios said the complaint provides no basis for the Writ of Mandamus.

Palacios also wrote the alleged licensing scheme also led to another issue. She argued the petition describes the licensing scheme in such detail that, “in a single-spaced, two-column format, (it) fills the front side of poster-sized sheet of paper measuring 25 inches by 28 inches and continues on the back side of the sheet,” and was folded in an origami-like manner “so it would appear to be 8-1/2 inches by 14 inches in size.”

Due to the sizing issue and that of the folds, Palacios argues the petition does not comply with Michigan election law MCL 168.488, section 482(i), which says, “each petition under this section must be 8-1/2 inches by 14 inches in size.”

Documents submitted with JMC’s complaint argue its petition meets the requirements of the law, citing guidance from the Secretary of State that allows for extension of petition language onto an attached fold-over section, provided that the size requirement is met when that section is folded down. In comments during a regular Three Rivers City Commission meeting in July, Andrew George, a representative of the plaintiff, compared what he identified as the Three Rivers petition in question to the one which put the successful state marijuana initiative on the 2018 ballot. Although that meeting took place through a virtual, online platform, the two petitions appeared to be identical in size and in the manner folded.

Palacios wrote that the Secretary of State’s guidance “on its face is limited to statewide ballot proposals,” and said JMC provided no argument for why it should apply to a local initiative. Further, she alleged the guidance language permits only a single fold, whereas the JMC petition contained multiple folds.

In its suit documents, JMC’s attorney included a document alleged to be Bliss’s rejection letter. However, Palacios wrote, “Exhibit B to Plaintiff’s Complaint is not (a) copy of Defendant’s August 7, 2020 letter. The document attached as Exhibit B is a letter from the City of New Buffalo.” She wrote that the true and correct letter is attached with the brief submitted to the court Tuesday morning.

Regarding JMC’s request for declaratory judgment that the petitions comply with the MRTMA, Palacios alleged the plaintiff “has not identified the court rule under which it believes it is entitled judgement.” Further, she wrote, “because the Plaintiff’s motion only presents questions of law, and no disputed issues of material fact,” the court should rule in Bliss’s favor.

Regarding the Writ of Mandamus request, Palacios argued “there is no evidence that Defendant did not canvass the petition signatures,” which, if true, would eliminate the basis for the request. She wrote that “an insufficient number of valid signatures was not among the reasons” given for the petition’s rejection.

Palacios wrote that previous Michigan case law has established that a clerk does not have to “consider the merits of potential substantive challenges to a proposed initiative,” meaning that Bliss’s interpretation that the other issues as presented were sufficient grounds to reject the petition.

The item-by-item response largely reflects Palacios’s statements in the brief. Both the brief and the item-by-item response allow for the legitimacy of other claims by the plaintiff, and do not dispute them. However, those claims largely describe the facts of who submitted the petition and when, and do not affect the possible legitimacy of the petition’s rejection or the lawsuit one way or the other.

Neither the plaintiff’s suit documents nor the defense’s response documents are legally binding at this time, but are subject to the outcome of continued court appearances. Until he is clearer on the facts, arguments, and legal parameters of the case, Stutesman said on Tuesday morning he will have to determine whether a ruling on the suit would have to take place under a bench trial, a motion, an order to show cause hearing, or another process.