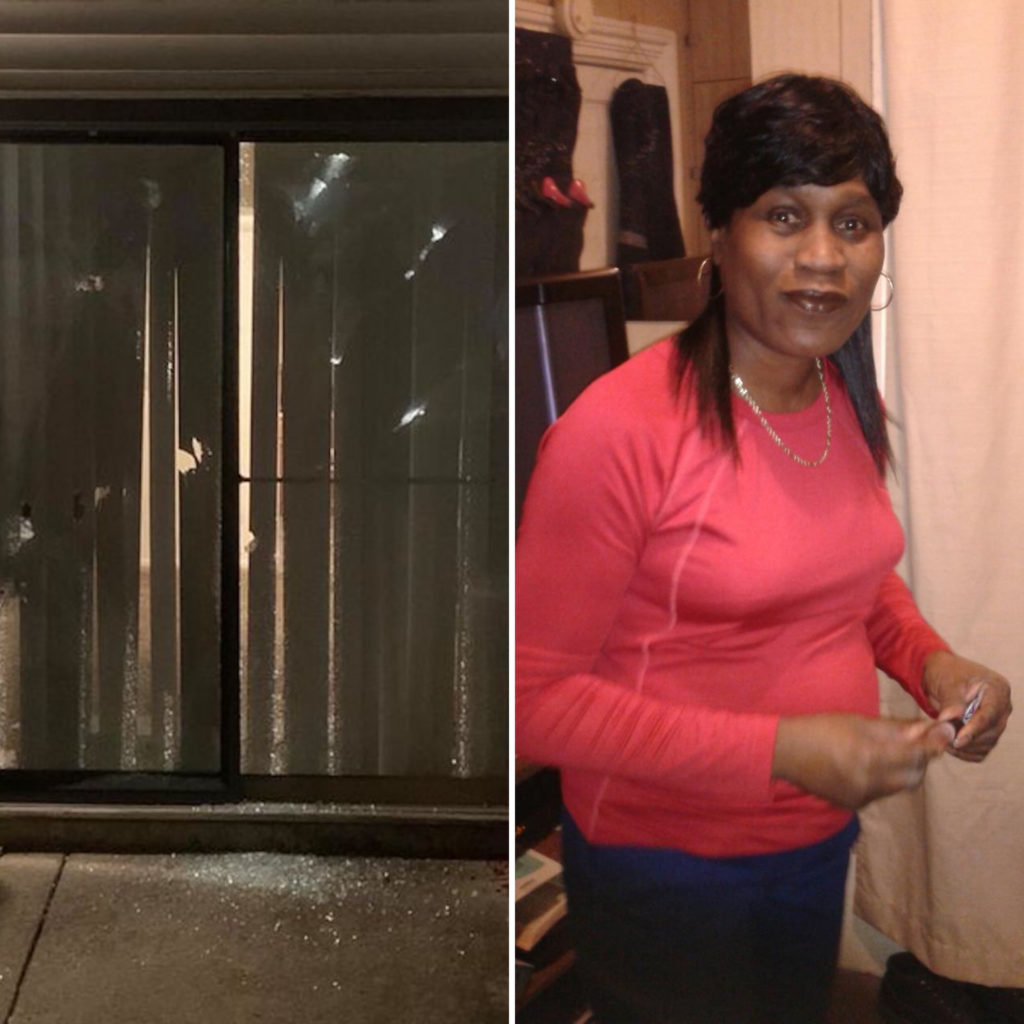 Cynthia Scott was in her apartment at Riverside Townhomes in Three Rivers when someone fired multiple gunshots at her building in the early morning hours of Monday, August 31. No one was harmed in the shooting. (Photos provided)

A 64-year-old Three Rivers woman is looking for a secure place to live after her home was shot at on Monday.

Cynthia Scott was in her apartment at Riverside Townhomes when someone fired multiple gunshots at her building in the early morning hours of Monday, August 31. Officers from the Three Rivers Police Department (TRPD) were dispatched to the scene at 3:03 a.m. where Scott was found unharmed. She was alone in the apartment when the incident occurred. “Thank God, because usually I have my grandkids, one, two, or three of them with me at all times.”

Days after the shooting, Scott says she is shaken and anxious, and has gotten little sleep. “The property to me is not my concern now, because they’ve taken care of patching up everything, but with myself, mentally, I’m messed up,” Scott said. “I’m still hearing shots when I close my eyes to go to sleep. I wouldn’t wish this on a bad enemy, seriously. It’s very, very dangerous. It’s a messed-up situation to be in, knowing it wasn’t meant for you, which it shouldn’t be for anyone. That’s something I don’t think someone should have to go through.”

Dewania Hankins, Scott’s daughter, reached out to Watershed Voice about the shooting on Monday. Hankins said she is concerned for her mother’s safety and the safety of other neighboring, elderly tenants. Hankins said her mother’s apartment “was shot up 12 times and no one is talking about it.”

A family member offered Scott a hotel room after the incident, and she is now staying with other family. Scott said she had no prior issues in the complex. “This was the first situation I’ve ever been in, and I have never had any encounters with anyone, arguments, nothing,” she said. Scott has no idea who the perpetrators might have been, but said she believes the shots may have been intended for a former tenant in the complex who no longer lives there.

Scott is worried about a lack of security measures at the complex in the wake of Monday’s incident. “I don’t think it should even be open without cameras or something around,” she said. “The main thing is safety there and other places like it, that’s my main concern. This could happen to someone else, and they might not be as lucky as I was with the Lord Jesus watching over me. It’s very dangerous for kids. Somebody’s breaking into cars. They should have cameras, that’s the main thing. Cameras should be up in a place like that.”

With cameras, Scott said she believes the police could have had leads on who committed the shooting. In comments to Watershed Voice, Three Rivers Police Chief Tom Bringman said there could have been conversations about putting up cameras when the complex was first built, but costs and logistics associated with the cameras, support equipment, providing a space to store the recorded information, and maintenance can discourage the investment.

Although she has lived there since the spring of 2018, Scott said she has no interest in ever returning to the apartment where the incident occurred. “I’m trying to move out as we speak,” she said. Complex management said she could move to an available, one-bedroom apartment in the complex a short distance from the one where the incident took place, but she declined because it was too close to the crime scene.

Scott said she would have preferred to move to another unit further away, perhaps even in another complex under the same company’s ownership. However, she said management told her she would have to apply for such a unit. Watershed Voice reached out to local management for the Riverside Townhomes complex, who referred questions to a spokesperson higher up the management chain. That person had not yet returned inquiries as of press time.

“It’s a bad feeling to know that at one time, I was comfortable in a two-bedroom and living okay, and the next minute I’m out in the street, and can’t be offered anything but something around the corner from that incident,” Scott said. “They can’t even think of other places for me, and say, ‘this is what the situation is, she’s a good tenant, move her up on paperwork to get another apartment (in a different place).’”

Scott said the perpetrators, whoever they were, should have sought legal recourse against whomever their intended victim was. “If you want someone to be taken care of because they messed with you or did something to you, you should do it legally and let the police and detectives know who did it so they can take care of it instead of taking it into your own hands,” Scott said. “They could have killed my kids or my grandkids.”

“I’m just thankful nobody got hurt, that’s the main thing,” Bringman said. The Riverside Townhomes complex includes subsidized units, with rules regarding who can and cannot be there. Bringman said if there is an issue at any such complex, “usually it’s caused by people who don’t even live there. There are people who are going to ruin it for others.”

Regarding the perpetrators of Monday’s shooting, Scott said, “I wish they would get caught by the police and detectives and have justice served, so they can get what they deserve.” TRPD’s investigation of the incident is ongoing. Persons with information on the case should contact the department.