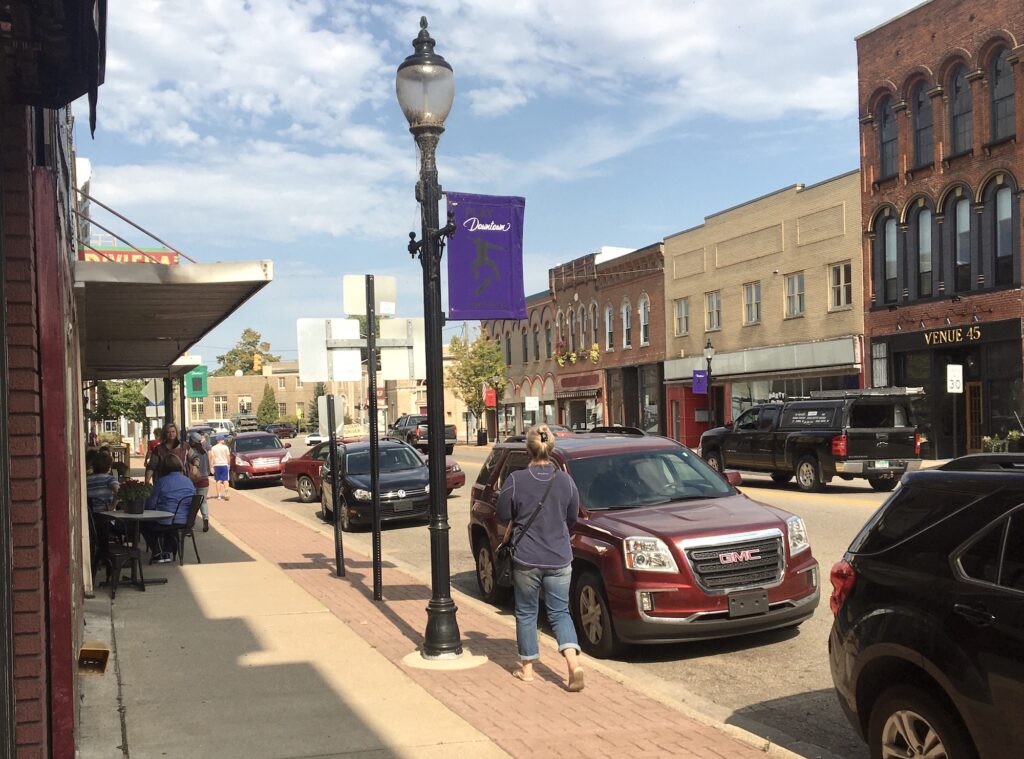 Downtown Three Rivers experienced an above-average crowd on its sidewalks over the weekend. Following a declaration establishing Saturday, September 26 as Downtown Day by Governor Gretchen Whitmer a few weeks ago, the Three Rivers Downtown Development Authority and Main Street Program (TRDDA) joined downtown merchants, the Michigan Downtown Association, and other communities across the state in hosting festivities.

The Three Rivers festivities included sales and specials by some of the downtown merchants, a souvenir fall flag giveaway, and live music in the East Walkthrough that connects North Main Street to the parking lots on Joshua Drive. The walkthrough has been subject to a recent overhaul that included installation of overhead string lighting, artwork, seating, and accommodations for live performances.

TRDDA Promotions Committee Chair Charlie Wolgamood organized several music acts that performed there Saturday. TRDDA Executive Director Tricia Meyer said, “the music in the East Alley was really popular. There were several people that sat there and just listened and brought carry out food from the restaurants on the block.”

Although the morning’s event attendance was a bit slow, by midday, foot traffic on the sidewalks began to pick up as businesses opened and people came out. “I think it well,” Meyer said of the overall event. “It looked like the streets were pretty busy in the afternoon.” The event was free and open to the public.

Up and down the downtown’s Main Street district, merchants reported various results. Volunteer Jenn Lindsay at World Fare said the store had “people in and out the whole day.” Lowry’s Books and More Owner Tom Lowry said his store was busy as well, as did Landmark TapHouse and Grille. Some businesses, like Rooster’s Wing Shack, reported usual traffic levels.

Brucrew Coffee, a specialty coffee roasting business, which is preparing to renovate the former River City Appliances building at 42 North Main Street, hosted an open house with free coffee and sidewalk seating. Co-Owner Evan Brueck said crowds were “a lot more than we expected,” and included “a lot of people we’ve seen at previous events, and a lot of new people.” Brueck gave away about eight liters of coffee and will return for other events in the fall. The business aims to be downtown two to three times per month until it has a storefront ready to open.

Due to the short notice of the governor’s proclamation, Meyer said, preparation for Saturday’s event “was a little bit last minute. We kind of threw it together, so I don’t know if everyone was able to promote it.” As awareness of the event grows, Meyer expects that future attendance will as well. She also said she expects attendance at other downtown events to rebound following the pandemic.

After a series of event cancellations over the summer due to pandemic restrictions and precautions, TRDDA is slowly adding small events to its lineup for the fall and early winter. Downtown Day was its first such promoted event. Another event called Backstage Bash October 10 will be a ticketed fundraiser, as will the annual Adult Halloween Crawl at the end of the month. Watershed Voice will provide additional coverage on those events as they draw nearer.