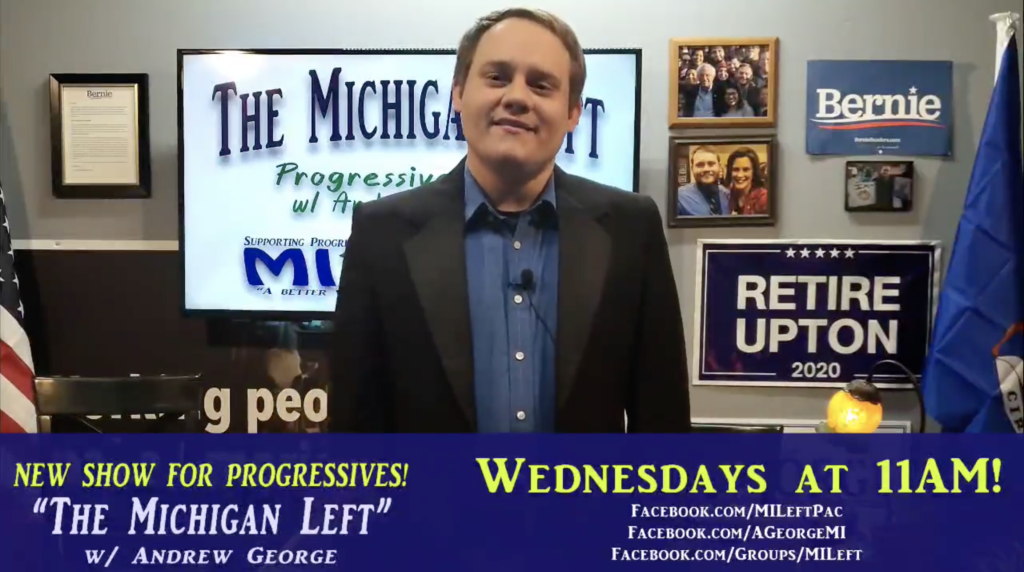 The Michigan left has been the talk of Three Rivers in recent months with structural changes to US 131 pleasing some and agitating others. The Michigan Left is back in the news again this week but will likely only affect web traffic.

“We plan to discuss progressive happenings all over Michigan, with a specific aim at rural communities — communities a lot like Three Rivers,” George said in an interview with Watershed Voice Monday.

“The name is even a comedic reference to the infamous ‘Michigan left turn.’ We want to focus on communities currently going right, politically, but are ready to make that U-turn and start going left. I came up with the idea after my very long campaign recently for St. Joseph County Commission. Recognizing the change in how we receive our information, due to COVID, I thought now was the perfect time to launch ‘The Michigan Left.’”

The Three Rivers native said there are three overarching goals to the show; “Shine a light on progressive candidates and issues in rural communities in Michigan,” bring unity to the progressive movement “as many identify as a progressive, but not necessarily as a Democrat,” and lastly to “push president-elect Joe Biden and other elected officials to adopt meaningful progressive values.”

George said his experience running for county commission played a pivotal role in his decision to launch “The Michigan Left.”

“Honestly, I went through the struggle of running a progressive campaign in a rural community. I learned a lot,” he said. “One thing I learned was that there are progressives all over Michigan, even in the smaller communities. While I was pleasantly surprised by the support I received from the community, I found it difficult to attract the support of larger statewide figures and political action committees (PACs) or to even be taken seriously by some of them.”

While George admittedly “did receive some great endorsements” from the likes of Gov. Gretchen Whitmer and others, it took a lot of work and he wants to make it easier for other like minded candidates running in his and other rural communities around the state.

“I hope to expand ‘The Michigan Left’ to become a PAC that supports candidates running similar campaigns to how mine was ran,” he said.

However, George doesn’t plan to just help others’ dreams come to fruition, as he still has aspirations of his own to run for public office.

“I will absolutely be running for office again. Though, I am not certain that it will be for county commission this time around.”

In The Michigan Left’s debut episode, which will air at 11 a.m. Wednesday morning on multiple online platforms, George plans to lay out the format of the show and talk to guests about a myriad of topics.

“We will jump right into the issues, including the Michigan election certification controversy, amongst many other things,” George said. “Later, we will have our very first guests on the show. Chairman Mike McCurdy and Vice-Chair Zahra Abbas of the Michigan Democratic Party Cannabis Caucus will join us virtually to discuss the case of Michael Thompson, a man currently serving a 40-60 year prison sentence in Michigan for selling 3 pounds of marijuana. Obviously, views have changed drastically in regards to marijuana, as well as many of our laws. Mike and Zahra are going to give us some insight on what they are currently doing to advocate for Mr. Thompson.”

George encourages viewers to get involved in local government, and to ask questions, whether it’s at a city commission meeting or starting with his show.

“We are just getting started and have huge plans, but we will heartedly ask any of our viewers to submit questions or issues they want to hear discussed to our Facebook page at www.facebook.com/MILeftPAC or by email at mileftpac@gmail.com. Also, if you have a guest you would really like to see on the show, feel free to let us know.”