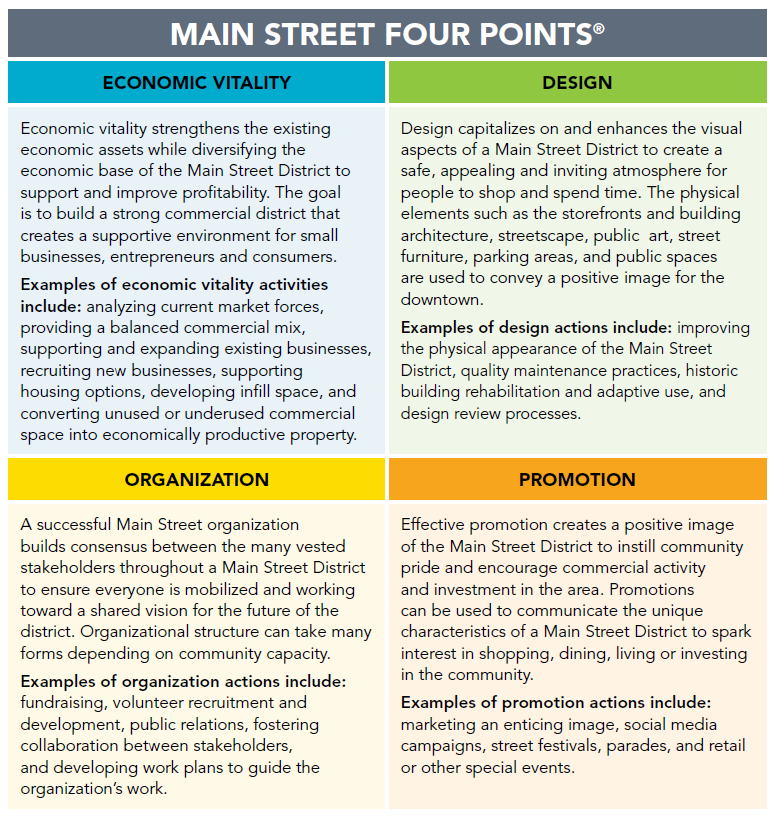 Michigan Main Street began in 2003 and is a Main Street America™ Coordinating Program. Pictured are four areas of focus for all Main Street communities, including the Three Rivers Downtown Development Authority.

The Three Rivers Downtown Development Authority (TRDDA) Board of Directors chose to delay the evaluation of its Executive Director Tricia Meyer, as well as a decision on whether it will renew its Master Level membership with the Michigan Main Street program during its regular meeting Friday. Both topics are expected to be discussed during the board’s annual budget retreat later this month.

Meyer, who moved to Three Rivers in the mid-1990s, has served on the TRDDA board both as a board member and as chairperson, and has served as the organization’s interim executive director twice before taking over the role officially in 2019. Board Chair Andrew George said the evaluation, the process for which was anonymous, had to be delayed because he hadn’t received every board member’s evaluation prior to Friday’s meeting.

Renewing the TRDDA’s Michigan Main Street program membership wouldn’t have a direct financial impact, but would require the organization to employ a full-time executive director, a requirement that prompted City Manager and Board Member Joe Bippus to ask “Do we have the money?”

Bippus expressed similar doubts a year ago when the topic of continuing the organization’s relationship with Main Street — “which exists to help communities find the tools and resources they need to bring vibrancy to their historic downtowns” — came up.

Meyer said the decision was ultimately up to the board but added that through its partnership with the Main Street program the TRDDA has “momentum,” and “discontinuing” that partnership would be “detrimental” to downtown.

George said “we are finally approaching the end of (our debt),” and “it will be a huge boon for downtown when that debt is gone and we’re still with Main Street.” Bippus said he’d like the TRDDA to continue its relationship with Michigan Main Street but would prefer to table the topic until the budget retreat to see if they can afford Meyer working full-time.

Vice Chair Michael Hogoboom*** said, “We can table it but Tricia definitely raised more money than we paid her” in 2020, and said the prospect of paying Meyer full-time shouldn’t deter the board from renewing its Main Street membership.

***Hogoboom is a writer, podcaster, and self appointed director of marketing for Watershed Voice.