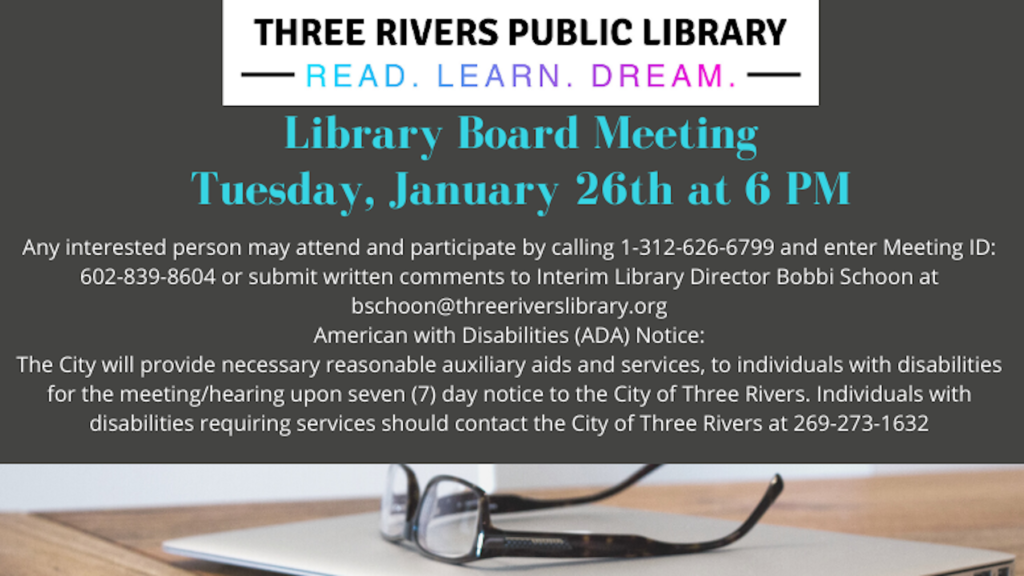 The Three Rivers Public Library Board will meet at 6 p.m. tonight, Tuesday, January 26 via Zoom, to discuss a variety of topics, including a potential lease agreement with the Three Rivers Woman’s Club.

As previously reported by Watershed Voice, the Three Rivers Library Board discussed the prospect of renting a room to the Three Rivers Women’s Club (TRWC) for the purpose of archival storage during its meeting on Tuesday, November 24, 2020. The board didn’t make a formal decision at that meeting, opting instead to weigh the particulars of a rental agreement and any liability the library might incur if it grants the club keyed access to a room in its basement.

Acting Library Director Bobbi Schoon said the TRWC would only have access to that room during regular business hours, and its key would only unlock the door of the room in question. Since that meeting a lease agreement has been drafted but City Attorney J. Patrick O’Malley is in the process of reviewing the document, so a decision on the matter may not be reached at tonight’s meeting.

The library will also discuss its contract with Park Township for library services.

Schoon said three options were on the table to resolve the matter but one is not considered viable by either party:

1) The township assigns 50% of the penal fines and agrees to provide 50% of the 3/10 mil state taxable value for the entire township as needed for library state aid financial eligibility.

2) The township pays for the TR Schools addresses (as they have been) and then pays a fee for each Park resident outside of this area that wishes to have a card.

3) The township pays the same amount and services are reduced for Park members. Both parties agree that option 3 is not viable.

To attend Tuesday’s meeting, simply follow the instructions laid out in the featured photo of this article.