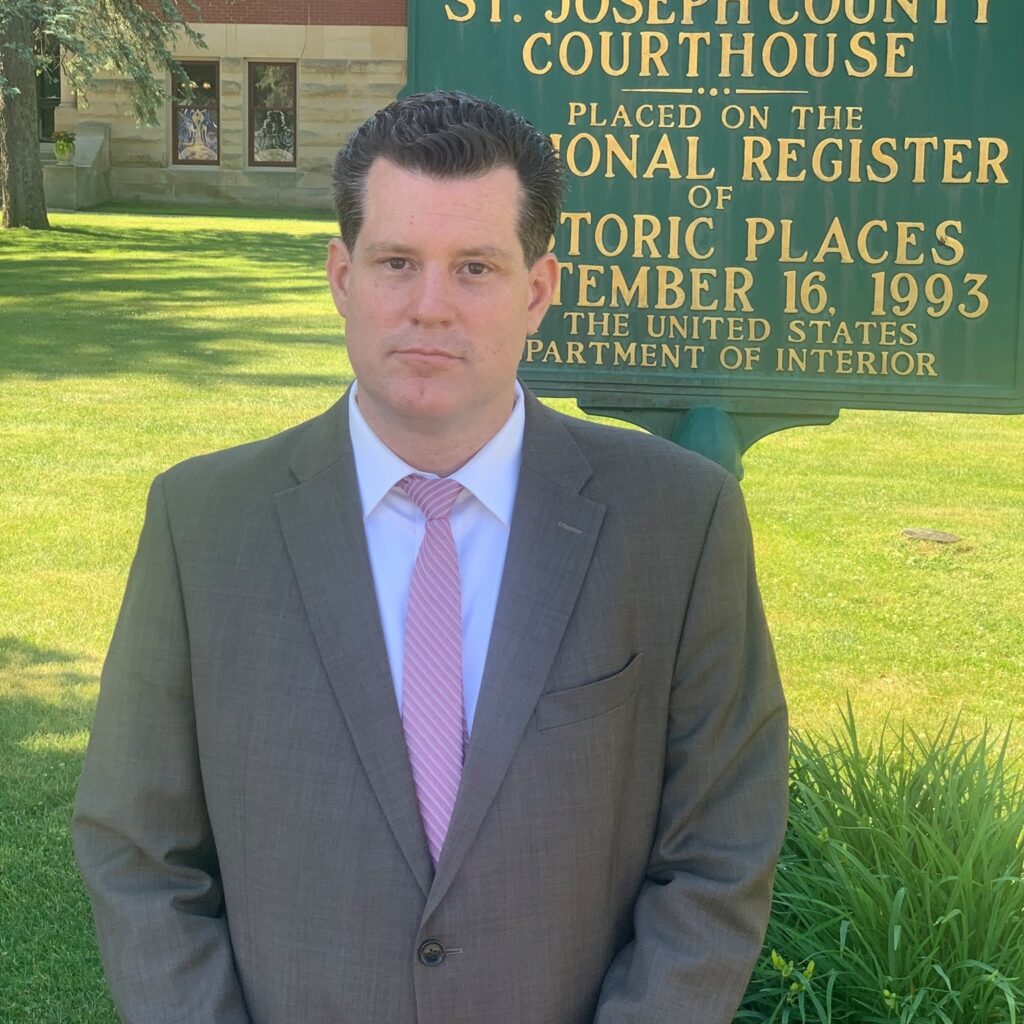 St. Joseph County Prosecutor Dave Marvin addressed the St. Joseph County Commission’s executive committee Wednesday concerning an exception to the county’s hiring freeze, a request Marvin has submitted more than once during his first two months in office in an effort to get his house in order.

Marvin said he recently spoke with Circuit Court Judge Paul Stutesman concerning circuit court felony cases. The county handles approximately 300 felony cases a year, according to Marvin, but as of January 2020 there were 600 such cases backlogged.

“That kind of tells you, well, a number of things — one of the things is that the COVID situation caused a lot of backlog,” Marvin said, “and what happened is, right now what we’re seeing is all the attorneys, the judges, the prosecutor’s office, a lot of people are reluctant to plea or to resolve their cases because they know there won’t be jury trial, and there really is not a consequence (to leaving those cases unresolved).”

Marvin added, “As you know, we tried to get people out of the jail as much as possible, so the numbers went way down. There are people who are repeat offenders out in the street, so with 600 cases out there that have to be resolved, that’s a huge load.”

Of those 600 felony cases, the county has 19 capital cases or cases which could result in a sentence of life in prison. Marvin said, “those include various rape or CSC (criminal sexual conduct) cases, and homicides.” The newly elected prosecutor said that number is likely to go up, as his office continues to review charging requests for additional capital cases. Marvin has detailed a number of changes he wants to make within his office in recent weeks but the first priority was replenishing a depleted workforce.

“During (the pandemic) we had three people keeping us afloat (in the prosecutor’s office), and so that’s part of it also, we were understaffed,” Marvin said. “I said this before to people, if you ever run into (Assistant Prosecuting Attorney) Josh Robare somebody should shake his hand because with all of the overwhelming amount of work he was left to handle, he did that, and he’s still here, and we’re lucky.”

Beyond staffing shortages, Marvin said local law enforcement needs support, direction, and assistance from his office to ensure they are up to date with the latest laws and procedures to avoid situations like the Wade Allen case happening again.

On the night of May 22, 2019, Allen was arrested after officers from the Sturgis Police Department appeared at his home on a phoned-in tip about a dismembered body that Allen allegedly intended to dispose of stored in his home. The officers found parts of the victim, Kelly-Jien Warner-Miller, in a cooler inside Allen’s apartment. However, the sequence of events leading to the discovery of the body called into question whether the search was conducted in accordance with the Fourth Amendment to the U.S. Constitution.

Before Marvin was sworn in as county prosecutor in January, he served as Allen’s defense attorney, and saw firsthand the need for reform in how the prosecutor’s office assists law enforcement.

“One of the problems that happened was there were police requests for help, assistance that just never happened, training hasn’t happened — that’s part of the prosecutor’s job is to make sure that the latest laws are obeyed, as well as processes and procedures,” Marvin said. “That’s the kind of work that should be going on that hasn’t, so it’s not just court.”

The prosecutor’s responsibilities go beyond the scope of the courtroom, with Marvin estimating 60 percent of his role is administrative with the other 40 percent taking place in court. Marvin said the county has been “farming out civil work” for years, and could save a considerable amount of taxpayer dollars by handling those cases in-house.

“I don’t know how much money you’re spending farming out civil work but the taxpayers are already paying for an attorney, and I don’t think this office is helping the way a lot of county prosecutors are helping,” he said. “You should not be be farming this work out if this can be done by this office; you’d save a lot of money. And if we hired (another assistant prosecuting attorney) I think a lot of — I’d be available to do a lot more — and help the community the way it needs to be helped.”

Marvin said with the workload the prosecutor’s office has ahead of it, it’s going to be as busy as it’s ever going to be, and they’ll need all of the help they can get. Reading from an email that went out in August 2020, Marvin quoted a St. Joseph County judge — who Marvin didn’t identify — who spoke on the subject of determining how many attorneys the county should hire.

“There is a statement in there that I read and underlined, and it says, ‘Determining the appropriate number of attorneys in (the prosecutor’s office) depends on the level of justice the commissioners would like the residents of St. Joseph County to receive,’ and I agree with that,” Marvin said. “I really believe after reviewing, after putting a lot of effort in, that we do need a fully staffed office and we need one more attorney. So, there’s my sales pitch.”

Commissioner Kathy Pangle said she appreciated Marvin “opening up our eyes to some of your responsibilities besides court.” She added that she has “complete trust” in Marvin, and recognizes Marvin knows “what (he) needs to get the job done and get the job done well.”

The commission will consider Marvin’s request for approval at its next meeting on Tuesday, February 16.