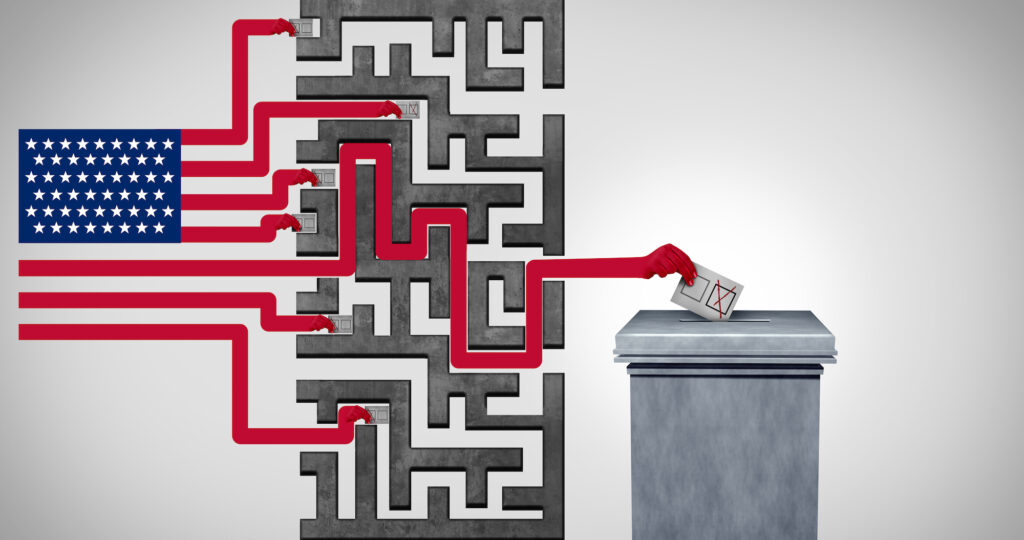 A new package of voter restriction bills introduced this week by Republicans in Michigan is part of a national trend in states across the country following now-President Joe Biden’s win in the 2020 election.

On Nov. 7, 2020, shortly after the Associated Press and networks declared the Democrat the winner, Michigan GOP-led legislative committees voted in a rare Saturday session to authorize subpoenas to find alleged election irregularities, as part of a national push from allies of then-President Donald Trump.

In the following months, Republicans held a series of committee hearings in Michigan and in other key states Biden won in which GOP activists aired conspiracy theories and accusations of alleged fraud pushed by Trump without evidence, including a high-profile meeting led by Trump lawyer Rudy Giuliani, who urged lawmakers to overturn the election. Many of those same accusations were made in dozens of court cases in Michigan and other key states — with Trump allies asking for votes to be tossed in areas with large minority populations like Wayne County — but were not found to be credible.

Hundreds of audits in Michigan showed that this election was safe, secure and accurate, said Nancy Wang, executive director of Voters Not Politicians (VNP), the nonpartisan, grassroots group that successfully led a 2018 effort to establish an independent redistricting commission in Michigan.

“The 2020 election was safe and secure, and more Michiganders voted than ever before in the history of our state,” Wang said.

Biden was inaugurated in January — but only after a pro-Trump insurrection at the U.S. Capitol on Jan. 6 sought to stop Congress from certifying the Democrat’s Electoral College win. Several Michigan GOP House members signed a letter to former Vice President Mike Pence asking him to decertify the election, several senators signed a letter to Congress before the certification asking for an investigation into alleged fraud, and 15 House members signed on to a failed lawsuit to overturn the election.

This term, Democrats in the U.S. House have passed a sweeping bill that includes voting rights and campaign finance reform, H.R. 1. GOP members in the Michigan Senate earlier this month passed a resolution to oppose the federal election reform bill.

But Republicans in 45 states have introduced hundreds of bills that would make it harder to vote, part of a well-financed national effort by conservative groups, including the Heritage Foundation, which has established “best practices” for legislation, according to the New York Times. The Republican National Committee has created an “election integrity’’ panel, as has the Republican State Leadership Committee.

“The COVID-19 pandemic created unprecedented challenges and exposed that our election processes are far from perfect. The good news is that states are truly the laboratories of democracy, and we can all learn from what others do well as we try to provide assistance to the leaders across the country that are spearheading the effort to reform our elections,” Johnson said in a statement in February. “I am confident that our commission will be able to provide substantive support to the lawmakers around the nation who need it, and restore our people’s trust in our elections.”

In Michigan, Republican lawmakers this week introduced a 39-bill package that would ban unsolicited mass mailing of absentee ballot applications, prohibit pre-paid postage on absentee ballot envelopes for absentee ballots, require a photo ID, curb the hours people could drop off their ballots in boxes and require video surveillance of such drop boxes.

“Michigan residents must have complete confidence in the fairness of elections and that all who can legally vote can vote,” Sen. Majority Leader Mike Shirkey (R-Clarklake) tweeted. “That’s why we’re proposing policy reforms to do just that – restore confidence in our elective form of government while giving everyone a voice.”

Senate Minority Leader Jim Ananich (D-Flint) countered that the bills represent an “extension of lies and deceit about the last election.”

“We cannot and should not make policy based on The Big Lie,” Ananich said. “Our elections are fair and safe and that has been the case under Republican administrations and Democratic administrations. The fact that Republicans didn’t win as many races as they wanted to does not justify their attempt to silence voters.”

While other states like Georgia have been debating bills for weeks, the Michigan package didn’t drop until Wednesday. Michigan is somewhat of an outlier among states, as two-thirds of voters in 2018 passed a constitutional amendment significantly expanding voting rights in the state, including no-reason absentee voting, same-day voter registration and straight-ticket voting.

Repealing key provisions would take another constitutional amendment, so experts said it may have taken Republicans more time to craft a package of restrictions.

Wang said the bills are part of the “coordinated, national effort to make it harder for voters to exercise our right to vote.

“The thousands of volunteers who make up VNP – everyday citizens, from rural and urban communities and across the political spectrum around the state – are focused on protecting voters against any law that restricts access to the ballot. We will fight to make sure that special interests do not suppress the vote in Michigan,” she said.

There’s also a parallel effort to the one in the Legislature. The self-described conservative Rescue Michigan Coalition, which has put together a wish list of voter restrictions, is seeking to do a ballot drive. The coalition called the November 2020 election “a disaster.”

“We recognize that fixing Michigan’s broken elections will be a major undertaking, and we will exercise due diligence to ensure we get the policy right before we proceed,” said coalition founder Adam de Angeli, who also organized protests last year against Whitmer’s COVID health measures. “We have prepared what we can confidently say is a massively beneficial set of reforms, contained in one single bill. It’s a great start, but we want to consider every possible improvement to make it the best bill it can be. We will be engaging lawmakers, attorneys, and other experts, but we want to hear from everybody. We want every element fully vetted.”

As Democratic Gov. Gretchen Whitmer is expected to veto any voter suppression bills the Legislature passes, a ballot measure could be the next step. That was the strategy Republicans used after Whitmer vetoed measures to restrict her emergency powers during the COVID pandemic last year. Activists formed and Unlock Michigan, a ballot drive to dump the law she used for many of her early orders. A group connected to Shirkey gave $550,000.

Michigan has an unusual citizen-initiated ballot measure process that could aid the Rescue Michigan Coalition.

Many groups, like Right to Life of Michigan, have launched petition drives because they have a key political advantage. If groups get the required number of valid signatures, the measure first goes to the Legislature, which can adopt it with a simple majority vote. The kicker is that the governor can’t veto it. That’s how restrictions in abortion coverage in health insurance policies, known as “rape insurance,” became law in 2013.

Senate Republicans are billing their package as “comprehensive election reform in Michigan.”

“Last year, we experienced an election unlike any other,” said state Sen. Rick Outman (R-Six Lakes). “We were in the midst of a global pandemic and it was the first year that many new laws were in place, like same-day voter registration and no-reason AV [absentee voter] ballots. The widespread concern and lack of confidence and trust that stemmed from the 2020 election was a warning sign that something needed to be done to restore and maintain faith in our system.”

Here are some of the key bills:

A slew of voting rights advocates raised concerns about the package, arguing they will disproportionately affect the poor and people of color.

The Rev. Horace Sheffield III, a noted civil rights leader in Detroit, said the GOP members who have sponsored the package should create a “[Ku Klux] Klan caucus.” He said the legislation is racist on its face and is aimed at “silencing” Black and Brown voters, many of whom played a significant role in electing Biden president.

“What they are doing is worse, almost, than anything we saw in the past,” said Sheffield, whose father, Horace Sheffield Jr., was a prominent UAW official who participated in the seminal Selma, Ala., voter registration effort in 1965.

Geiss, a state senator who is African American and Latinx, called the package out for putting “lipstick on Jim Crow.”

“The Michigan Senate Republicans’ latest attempt to strip Michiganders’ access to their Constitutional right to vote is an unconscionable resurrection of Jim Crow designed to keep Black and Brown Americans from fully participating in the democratic process,” she said. “These bills will do nothing but limit access to voting booths and disproportionately affect these communities, while further perpetuating the institutional, systemic racism we live with every day. It is nothing short of racial terrorism and an attempt to create voting apartheid.”

“For democracy to work for all of us, it must include us all. Throughout our history, we have fought to ensure that every eligible voter can cast their ballot and have it counted. But a handful of elected officials in Michigan and across multiple states want to take us backwards, ultimately making it harder for people to vote by creating barriers to the ballot box, especially for the elderly, Black voters and other voters of color and rural voters,” Elmir said.

On Wednesday, Democratic Michigan Secretary of State Jocelyn Benson testified before the U.S. Senate Committee on Rules and Administration on Wednesday in support of the national voting rights law before the body, H.R. 1. Benson also talked about the need to preserve access to the ballot amid the wave of voter restriction legislation in states.

“Michigan voters elected me because I promised to make it easier to vote and harder to cheat in Michigan elections,” said Benson. “And that’s exactly what I did in the 2020 elections, which saw millions of voters utilize new expanded voting rights, and was audited more than any election in state history.”

Benson has proposed her own election reform plan, which she said would make it “easier to vote and harder to cheat.”