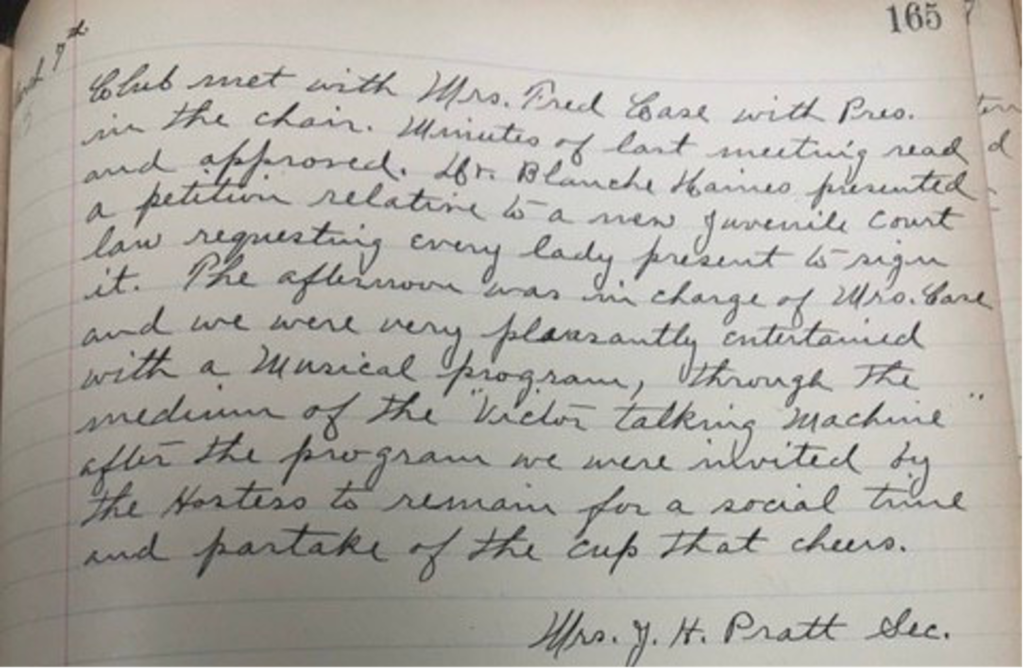 In the notebook of minutes from 1905-06, we see how the Three Rivers Women’s Club combined a broadening outlook on the world into their meetings, held at their homes. And as you can see in the minutes, the women always made sure to have both business and social time at each meeting! (Photo provided)

March and Women’s History Month are over, but there is good reason to continue adding information to the record of women in history. With that in mind, it is a perfect time in these articles on the 130-year history of the Three Rivers Woman’s Club to celebrate not only the national leaders of the Women’s Movement but also the local women who worked to see women recognized as equal contributors to American society.

Prominent now in our history books are names like Susan B. Anthony, Elizabeth Cady Stanton, Sojourner Truth, Mary Church Terrell, and Alice Paul. These national figures were joined by thousands of women and men around the country in the years from 1848 to 1920. Last year was the centennial of the ratification of the 19th amendment to the Constitution: The right of citizens of the United States to vote shall not be denied or abridged by the United States or by any State on account of sex.

Working to bring suffrage about and to ensure the Michigan Legislature voted for the 19th Amendment were the members of the Three Rivers Woman’s Club. Among them were names we see all around us today on schools, streets, the airport, a museum, and the park: Moore, Andrews, Haines, Peeler, Cushman, Silliman, Hoppin, Scidmore.

Who were these women in a city of 3,550 people? Five at least were college graduates or women who had attended institutions of higher learning. Those included Mrs. E.B. Moore, Mrs. Lucy Fellows Andrews, Mrs. Myra Redfield Hewitt, Mrs. Thirza Cushman, and Dr. Blanche Haines. Dr. Haines, writing in 1940 about these women whom she had known, said, “The others were women of intelligence and social graces, with more than the average scholastic training, for that period.”

Most were emigrants to Three Rivers coming from Massachusetts, Vermont, Pennsylvania, Delaware, Indiana, and other counties in Michigan, although several were related to early pioneers, Mrs. E.B. Moore, Sue Silliman, and Margaret Hall (descended from John and Margaret Fry).

Their focus was not just on women’s rights but on civil engagement in general. In 1899 the women wrote a new constitution for the club and Dr. Blanche Haines wrote of the changes in club purpose from 1893 to 1899, as their membership grew from the original 14 to 47 members:

“The Constitution changed, this time stating in the preamble that the purpose of the Club was Intellectual Culture.  A few years later it broadened further to include Civic and Legislative Issues.”

In the notebook of minutes from 1905-06, we see how the women combined a broadening outlook on the world into their meetings, held at their homes:

Club met with Mrs. Fred Case with president [Mrs. Scidmore] in the chair. Minutes of last meaning [February 28, 1905] read and approved. Dr. Blanche Haines presented a petition relative to a new juvenile court law requesting every lady present to sign it. The afternoon was in charge of Mrs. Case and we were very pleasantly entertained with the Musical program, through the medium of the“Victor talking machine.” After the program we were invited by the hostess to remain for a socialtime and partake of the cup that cheers. — Mrs. J. H. Pratt Sec.

As one reads through the carefully preserved notebooks of minutes in the years up to 1921, the range of what the women studied and what community actions they supported grows broader and broader, from juvenile law to public health, the higher education of girls, the future of the airplane, teachers’ retirement fund, and in 1914, they petitioned “the Town Council [that] a woman be added to the Park Commission.”

With the U.S. joining the WWI Allies in 1917, their efforts also turned to war work and helping refugees. There will be a whole article in June on the ways in which the Club aided the country in both world wars and the recognition they received for those efforts.

But we would like to do a little more name dropping here of Club women whose names local residents will know and who were recognized for their contributions to Three Rivers. One only need glance at the roster of Citizens of the Year chosen by the Three Rivers Lions Club to see club members who were honored in the last 40 years: Betty Matson, Zelda Voorhees, Mary Black, Helen Wickman, Lucile Haring, Mary Snow (husband Taylor), Phyllis Jones, and Jo Barton (and husband Delbert).

“An hour’s conversation with Grace McCally, unopposed candidate for city commissioner, in Three Rivers’ Second Ward should convince anyone that the city commission is in for a lively time. Being the first woman in Three Rivers history to become a commissioner, there are some who might assume the delicate appearing, lovely redhead would be content to rest on the laurels of merely holding the office. But such is not the case. Mrs. McCally intends to fight for what she believes. She intends to fight to give better services to all citizens of Three Rivers. She wants to do a job that will help Three Rivers grow, one that will cause its citizens to prosper.”

This is one man’s take on one Three Rivers Woman’s Club member who was a leader in this city. But his words “She wants to do a job that will help Three Rivers grow, one that will cause its citizens to prosper” exemplify the spirit of the members since 1891, a willingness to work for the betterment of our community. Next month’s article will look at how that spirit led them to advocate for Public Health, an issue that confronts us today as we cope with the COVID-19 pandemic.