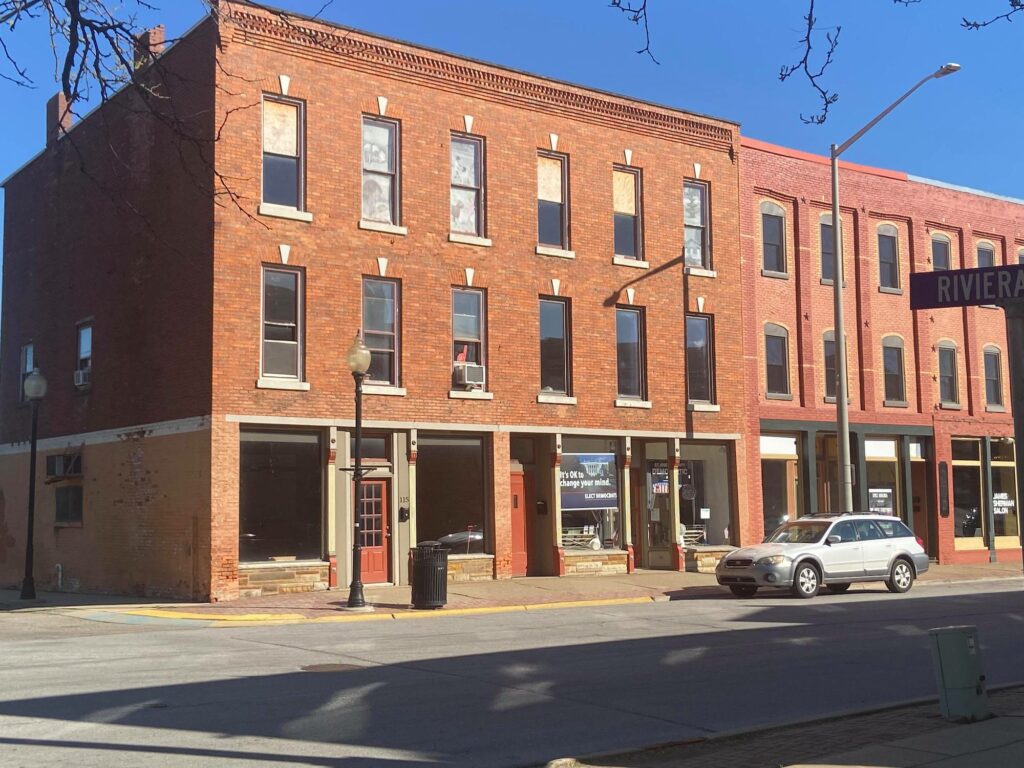 Pictured is the future location of Daly Dope, a marijuana dispensary set to open at 113 Portage Avenue in downtown Three Rivers.

The Three Rivers City Commission Tuesday held the first of two scheduled public hearings to discuss proposed amendments to the city code that would allow marijuana facilities within city limits as special exception uses, and get further public input on the matter. Following a lengthy discussion and public comments from a handful of citizens, a thin majority of commissioners expressed support for the proposed changes.

At-Large Commissioner Clayton Lyczynski described the exhaustive research he conducted between last month and Tuesday’s meeting, which resulted in him being firmly in favor of allowing marijuana facilities in Three Rivers.

“I’ve spent three hours on a continuing ed class (concerning legalizing marijuana in our community and our youth), I spent multiple hours with an industrial grower with a $15-$20 million facility, and did a full tour trying to understand how, why and what they’re trying to do,” Lyczynski said.

“I’ve spoken with an attorney who sits on a board at the state level who actually helped write the rough draft for Sturgis, and has also weighed in on ours to some extent. I’ve talked to people who have a transport business, I’ve talked to people who own a lab, just trying to wrap my head around this and what it would really mean — because obviously there’s the surface idea and the deep down, nitty gritty of it.”

Lyczynski referenced a recent “Facebook poll” he conducted to get a rough idea of how supportive or unsupportive the community is about marijuana, and while he doesn’t necessarily put a lot of stock into a questionnaire posted on social media, it did “lend itself to the fact that there is strong support (for it).”

Andrew George, who helped collect signatures for a petition on behalf of Jobs for Michigan Communities to get the issue of allowing marijuana facilities in Three Rivers on a city ballot, spoke in detail about the poll Lyczynski conducted, and what the city commission could do to uphold a promise it made last year to put the issue on a future ballot before it discovered it couldn’t be done legally.

“As you may know, 66 percent of our community voted in favor of legalized marijuana, which we talked about last time this issue got brought up,” George said. “More recently, I have to commend Commissioner Lyczynski, he did his due diligence. He went on Facebook and he posed a simple question, ‘Are you for or are you against marijuana facilities in Three Rivers?’ Last week I tallied up those numbers, and mind you it kept going but hundreds of people had already weighed in at that point, and it was 89 percent for marijuana facilities against 11 percent against marijuana facilities. Those numbers are staggering and show the support our community has for it.”

George said he doesn’t believe the commission made a promise “with ill intent” when it said it would put the issue on a city ballot, but “a promise was made and I feel the only way to rectify that promise is to just pass the ordinance” and let the community challenge the commission’s decision via a referendum if it so chooses. He added that nearby communities are already benefitting from the tax dollar revenue that comes from marijuana facilities, and if Three Rivers doesn’t act soon “we’re going to be left behind here.”

Commissioners Chris Abel and Carolyn McNary also spoke in favor of passing the amended ordinance, as did Mayor Tom Lowry. Abel and Lowry added that while they are in favor of it, language changes pertaining to the total number of facilities allowed in Three Rivers will need to be made before they cast their respective votes.

McNary, who previously voted against allowing such facilities, said she changed her way of thinking on the matter and will vote for it this time around.

“I support this ordinance. I’m glad the people are stepping up, they came forward a year or so ago (in favor of) medical marijuana, and while I didn’t think our city was ready for it then — I really looked at it more as a drug situation and not as a business — since then I don’t see it that way,” McNary said.

“I remember the veterans who sat there at city hall and explained to us all of the (medicinal benefits), and all of the health factors that are in marijuana, and I’ve learned a lot more since then. So I support it today, I hope we move forward with this draft, and I kind of feel like had I voted in favor of it back then, we’d be much farther ahead and our citizens wouldn’t have to worry about whether or not they would get the opportunity again. But today I do support it.”

Commissioner Daryl Griffith maintained his previous stance on the issue, saying while he has “no problem” with medical or recreational marijuana use, the conflicting law regarding marijuana at the federal and state level will prevent him for voting for it. Commissioners Pat Dane and Alison Haigh did not explicitly say whether they were for or against it on Tuesday but both have voted against marijuana facilities in the past.

After its discussion the commission voted 6-1 to schedule a second public hearing for its next meeting on Tuesday, May 18, with Griffith representing the lone dissenting vote.