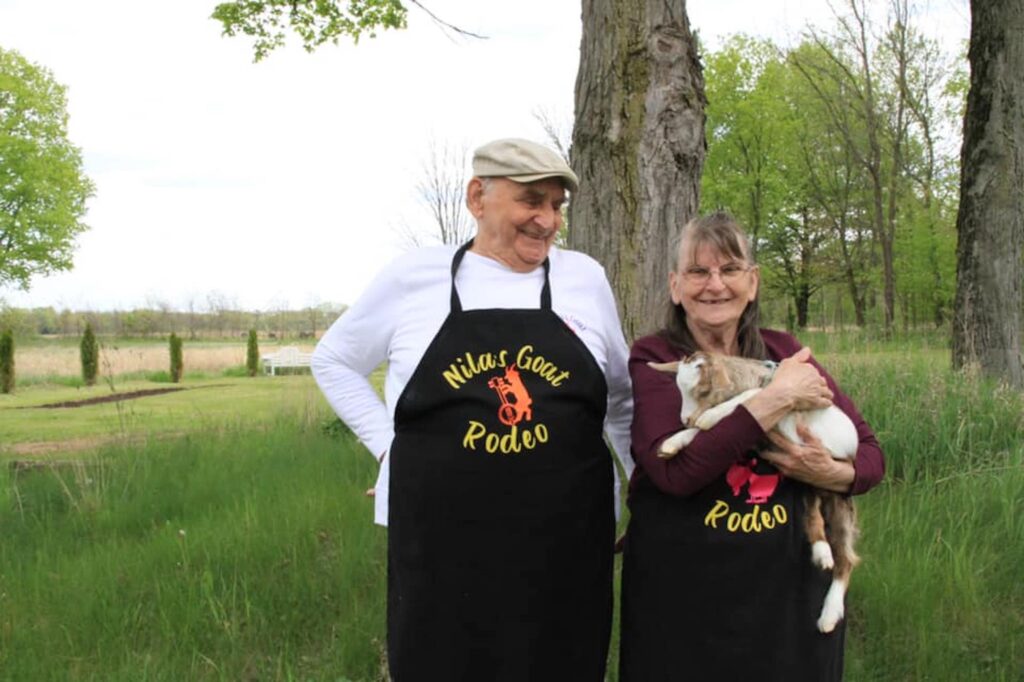 The many perils of social media are well-documented: scammers, hackers, trolls and bullies alike have been known to take pride in ruining your afternoon. But what about the do-gooders, well- wishers, and small-time philanthropists who do what they can to better the lives of complete strangers?

Nila and Jack Thompson, owners of Nila’s Goat Farm in Burr Oak, have no experience with the former but plenty with the latter, especially after they went viral on Instagram last week. Hundreds of folks took to their new website at the behest of a couple of social media influencers (@leeannmiller and @sharonsaysso) to buy soap, lotion, and various crocheted items to the tune of $18,000 in less than 10 hours, forcing the couple to shut down their website in order to collect their breath and catch up on orders.

Jack, who is nearing 80-years-old and has dealt with his fair share of health issues in recent years, spoke of gratitude and humility while sporting a placid smile Saturday at Farrand Hall in Colon. He watched at least a baker’s dozen of local volunteers assemble and package a portion of the 500-plus orders that will be shipped out in the coming weeks, and took a moment to talk about the kindness of strangers.

“Old people look around and see that everyone they know is dying, and they think, ‘Well, I’ll be the last of this lot,'” Jack said. “Then they go on the internet and they find out that a lot of people give a crap whether they live or die! And all of a sudden you have reason to live — I might go another 20 years, myself — I love it. I have never felt as humbled or as much gratitude for the world as I do at this moment.”

Jack added that while he’s grateful, he and Nila are also a bit overwhelmed as they’ve had to shift gears quickly in the matter of days to ensure their supply can meet the sudden uptick in demand.

“After 15 years of making soaps and lotions and being ignored at the farmers markets, we finally got online and had a blazing hail fire of orders, and while we’re tickled, we’re also frightened,” Jack said. “We’ve had to order new equipment, which has not arrived yet, and we’ve had to change our manufacturing facilities, which the contractors have not finished yet.”

Nila and Jack credit their business’ “explosion of growth” to James Gray, who co-owns Farrand Hall with his partner Jacob Hagan in Colon. Gray helped the couple sell more product in the span of 10 hours on the internet than they had in the 18 years they’ve been in business, including the 15 years they spent selling their wares at local farmers markets.

In a Facebook post published on Tuesday, May 11, Gray wrote, “Yesterday two Instagram accounts asked people to help my neighbors in Michigan by buying their goat milk soap. (@leeannmiller @sharonsaysso)

“We woke up today with over 500 orders and 1800 bars of soap sold! We had to shut down the online shop at 10pm because the orders were coming in by the second. Craziest thing I’ve ever seen.

“Two women who do not know me or these guys wanted to help them. They went online yesterday and asked their followers to help this couple out. I cried for hours yesterday because there were so many people reaching out on IG telling them that they cared for them and hoped these purchases helped them get through a rough patch.

“The online shop for Nila’s Goat Farm (@nilasgoatfarm) will open again in a few days if you also want to help them. #humanitywins#lovewins.”

Gray, who runs the Thompsons’ Instagram account and website, also helped them redesign their logo, and come up with new labels. The goodwill didn’t stop there either, as LTi Printing in Sturgis printed 1,000 of each label for the entire line of Nila’s Goat Farm products at no cost to Nila and Jack.

Gray said after the flurry of orders forced Nila and Jack to shut down their site, the kindness of strangers didn’t waver, it simply changed form.

“So we shut the shop down and went online, and told everybody, ‘Thank you, please be patient with us, we need to get caught up.’ And I literally have hundreds of direct messages, sent to Nila’s Instagram account, from people all over the country saying, ‘Don’t worry about it, take your time, get caught up. Let us know when the shop opens again, we want to buy from you but take your time. This wasn’t about soap, this was about helping you guys.'”