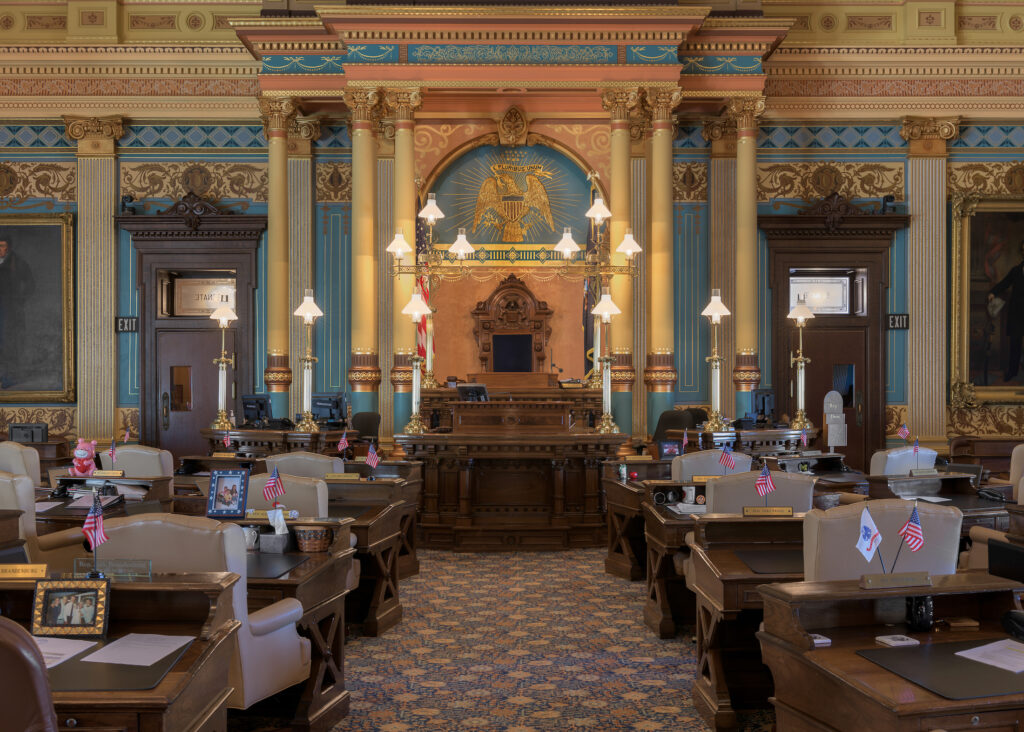 The Senate passed three bills Wednesday that would make it more difficult for voters to vote absentee and at the ballot box if they aren’t able to present a state-issued photo ID, despite fierce objections from Democrats that the new rules would be especially harmful to vulnerable voters and communities of color.

For months after it was declared that Democratic President Joe Biden won the Nov. 3 general election, Republicans held a series of committee hearings in Michigan filled with conspiracy theories and accusations of alleged fraud and filed lawsuits claiming widespread fraud in Michigan.

Despite that none of the accusations were found credible, Republicans in the state rolled out a series of election reform bills that they are calling a “preventative measure” to avoid election fraud in future elections.

“This bill package is not about voter integrity. It is not about preventing fraud. It is not about ensuring the security of the election,” said Sen. Sylvia Santana (D-Detroit). “It’s about being scared of losing an election because of what Brother Malcolm said, ‘we’re not outnumbered, we are out-organized.’ Well that is the election that scares you, because Democrats, with the strong support of black folks, out-organized you and got that fool out of the White House, and you are still mad about it.”

The three bills taken up on the Senate floor Wednesday for a vote were centered around photo identification requirements in order to vote.

Senate Bill 285, introduced by state Sen. Lana Theis (R-Brighton), requires voters to present their state-issued photo ID with their application for an absentee ballot. Voters who fail to show their photo ID will be issued a provisional ballot to vote.

The bill prompted the most debate and drew the most criticism from Democrats.

Sen. Mallory McMorrow (D-Royal Oak) said during a floor speech that the bill would disenfranchise the votes of senior citizens who have a harder time voting in-person and who may not still have a driver’s license anymore once theirs expires.

“If we’re going to consider outreach to our elderly, our seniors, our vulnerable and the homeless to make sure everybody can have ID we can have that conversation. But until that conversation and the resources necessary are put up, what this bill would do is tell those seniors, tell the homeless, tell the vulnerable who do not have an ID that you are not allowed to vote, that you do not have the same right that the rest of us have to vote in every single one of our elections,” McMorrow said.

One of the forms of identification that voters could be required to provide under this bill is the last four digits of their social number, something that an election clerk doesn’t have access to, Sen. Jeremy Moss (D-Southfield) said.

Sen. Ruth Johnson (R-Holly), the former Secretary of State, said she believes the bill “provides safeguards for voters and enhances the integrity of our elections.”

Senate Bill 303, introduced by Sen. Tom Barrett (R-Charlotte), requires voters to cast their ballot with a provisional ballot if they do not have a photo ID with them at the polling station, rather than signing an affidavit. This bill passed the Senate with a 19-16 vote.

“The first bill attacked our rights to vote absentee. These two bills attack our other option, which is to vote in person,” Sen. Rosemary Bayer (D-Beverly Hills) said. “So we’re carefully making sure that these three bills as a package attack all of our means of voting.”

All three bills passed the Senate along party lines with a 19-16 vote.

The bills are the first three out of Senate Republicans’ 39-bill package to be put up for votes. They now head to the House Committee on Elections and Ethics, and will be sent to the full House for a vote if adopted there.

The Republican-controlled state House, meanwhile, has been pushing its own package of “election reform” bills, though the contents are somewhat less controversial than the Senate’s and are being introduced gradually rather than all at once.

None of the nearly 40 House election bills were voted on Wednesday.

“Michigan Republican senators are dangerously pushing anti-voter legislation in retaliation to record voter turnout last November, which was one of the most secure elections in our state’s history,” said Merissa Kovach, policy strategist for ACLU of Michigan.

“Michigan legislators must protect the right to vote for all eligible voters, not suppress it. Michigan already has a voter ID law on the books, which has been in effect for more than a decade and working as it was intended — keeping our elections secure and accessible. Senate Bills 285, 303, and 304 are designed to take away choices on Election Day by removing the option to vote by signing an affidavit, which will not only make it harder to vote, but disproportionately impact voters who are low-income and people of color,” Kovach said.