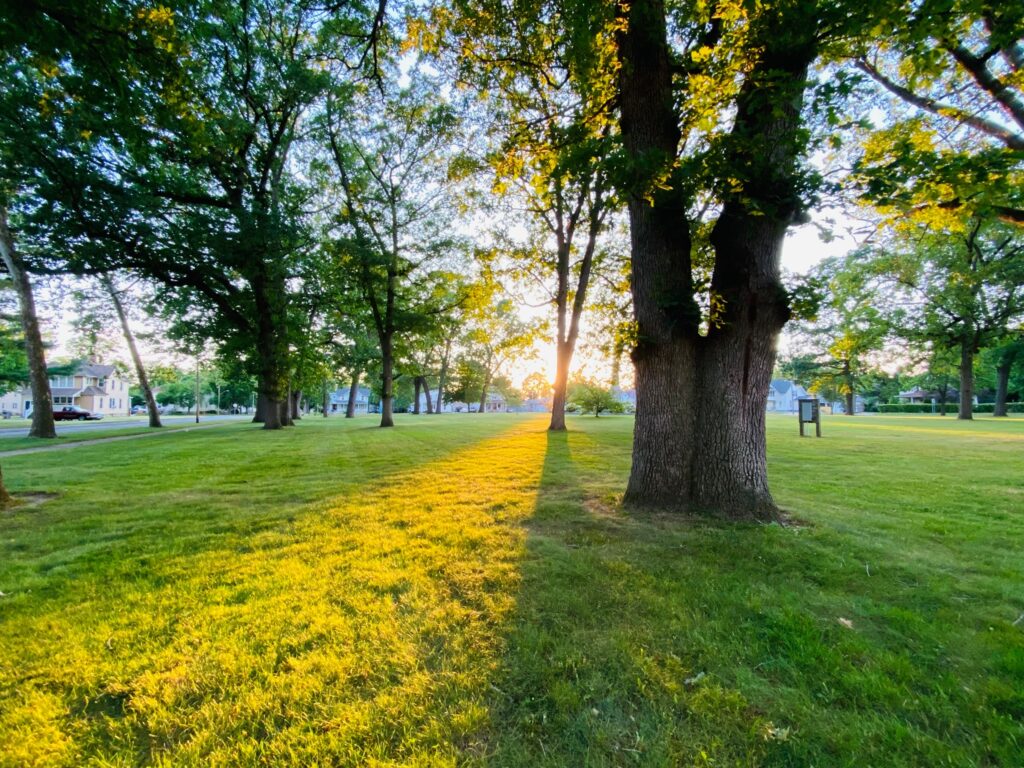 As the Pacific Northwest sweltered through a record-breaking heat wave last week, many residents here in America’s least air-conditioned city sought relief under the shade of cedars and maples in city parks. But in some areas of Seattle, that shelter was hard to come by.

“If you look at aerial photographs, north Seattle looks like a forest,” said Washington state Rep. Bill Ramos, a suburban Democrat who sponsored a bill the legislature recently passed to help cities improve their tree canopy.

“On the south side, you see nothing but rooftops and asphalt and not a green thing anywhere. It’s strictly a matter of socioeconomics and race.”

That disparity is not unique to Seattle. American Forests, a Washington, D.C.-based conservation nonprofit, released a nationwide analysis last month showing that low-income neighborhoods and communities of color have significantly less tree canopy. Those areas also are more likely to suffer from the urban heat island effect caused by a lack of shade and an abundance of heat-absorbing asphalt. Heat islands can be as much as 10 degrees hotter than surrounding neighborhoods.

“We found that the wealthiest neighborhoods have 65% more tree canopy cover than the highest poverty neighborhoods,” said Ian Leahy, the group’s vice president of urban forestry. “As cities are beginning to heat up due to climate change, people are realizing that trees are critical infrastructure. I’ve never seen as much momentum toward urban forestry across the board.”

In many cities and states, policymakers and advocates say they’re aiming to correct decades of inequities in urban tree canopy. They acknowledge how racist policies such as redlining have had a stark effect on the presence of urban green space, and that trees are important for public health. Some leaders have even pledged to use American Forests’ “Tree Equity Score” to target their tree plantings in the neighborhoods that need it most.

“People weren’t thinking about trees as these resources that provide a lot of benefits,” said Kevin Sayers, urban forestry coordinator with the Michigan Department of Natural Resources. “They thought of them as niceties, and trees followed money. There’s now a recognition that trees were not equitably distributed and maintained.”

Sayers works to help cities and nonprofits manage and improve urban forests. Michigan’s 10-year Forest Action Plan, which was drafted last year, calls for a neighborhood-by-neighborhood tree canopy analysis, with the goal of reaching equity. Sayers said he will work to incorporate the new tree equity data into that plan.

In many places, efforts to increase urban tree canopy are still in their early stages. Officials are conducting surveys, setting goals and making plans — while acknowledging the real work is still ahead. They say it will take time to build trust in underserved communities, scale up planting programs and change local laws to protect existing trees. But longtime foresters say political buy-in for such efforts has never been higher.

“Trees are nature’s air conditioners, and we’re starting to talk about them as a real adaptation investment,” said Shaun O’Rourke, a managing director at the Rhode Island Infrastructure Bank who also serves as the state’s chief resilience officer.

The state has worked with 20 municipalities in its program to fund climate resilience projects, and all of them have sought more resources for urban tree planting, O’Rourke said. Meanwhile, the Rhode Island Department of Health has incorporated tree canopy data into its health equity indicators, putting it alongside categories such as health care access and food insecurity.

“The data shows that Latinos and African Americans have a higher likelihood of dying after five days of extreme heat, and that’s an injustice,” said Cindy Montañez, CEO of Tree People, a nonprofit that works on planting and education projects near Los Angeles. “Planting trees is not about carbon reduction, it’s about saving lives.”

Los Angeles has appointed its first city forest officer to coordinate the city’s urban forestry efforts across departments. Rachel Malarich, who took the job in 2019, has been tasked with increasing tree canopy in underserved neighborhoods by 50% by 2028.

“Nineteen percent of all the tree canopy cover in Los Angeles exists where 1% of our population lives, concentrated in these affluent areas,” Malarich said. “The conversation has changed, and there are more public officials recognizing that tree canopy is not a beautification measure, but a central piece of our infrastructure.”

Trees also help to filter pollution from the air and absorb stormwater runoff. Studies also have shown that the presence of trees can have positive effects on mental health and cognitive function.

Earlier this year, the Phoenix city council voted to partner with American Forests to create an equitable tree canopy across all of its neighborhoods by 2030. The city has identified the busiest walking corridors where shade could prove most beneficial, and it’s planning to plant 1,800 trees along nine miles of “cool corridors” each year. The city’s recently passed budget creates an Office of Heat Response & Mitigation, which includes tree and shade administrators, and will pay for five new forestry staffers to plant and maintain urban forests.

“We have more tree cover in the higher-income areas of our community, and that’s something we’re trying to be intentional about changing,” said Mayor Kate Gallego, a Democrat. “We’ve always had strong support for tree planting in our city, but we’ve seen a real focus on equity in the last year and a half.”

In Boston, Northeastern University associate professor of law and policy Neenah Estrella-Luna is serving as a consultant to help draft the city’s first urban forest plan. Her team is working with city officials and community leaders to develop a pathway to tree equity in 20 years.

“The folks most marginalized—people of color, immigrants and low-income people—have the least access to anything green,” she said. “This is clearly an issue of environmental justice.”

Some state lawmakers have been active on the issue as well. Ramos, the Washington state legislator, introduced a bill this year that will require the state’s Department of Natural Resources to conduct a statewide assessment of urban tree canopy to find where it’s lacking. The measure, which was adopted by large, bipartisan majorities and signed into law, will also allow the agency to provide technical assistance to local governments for forest management. Half the money must go to underserved communities.

“We know trees create better health,” Ramos said. “How can we say that some people should have trees and other people shouldn’t?”

In California, Assembly Member Luz Rivas, a Democrat from the San Fernando Valley, has sponsored a bill that would create a funding program to help communities adapt to extreme heat. Projects could include urban forestry and green spaces. The bill passed overwhelmingly in the Assembly and is under committee review in the Senate.

Rivas also has fought in recent years to preserve investments in the state Urban Greening Program, which is funded by cap-and-trade revenues.

“My community has been disproportionately affected by pollution and the effects of climate change, including extreme heat,” Rivas said. “Our tree canopy isn’t as dense as other parts of Los Angeles.”

State and local leaders acknowledge that reaching tree equity won’t be easy or simple. Many urbanized areas lack suitable places to plant, especially spots that can accommodate the large trees that provide the biggest benefits. Also, most urban trees grow on private land, meaning cities can’t rely only on parks and streets to reach their goals.

In many neighborhoods, cities have done a poor job of maintaining existing trees, which can damage houses and cars if unhealthy trees are left to fall. That’s made some residents skeptical about new plantings.

“Tree planting is always a very visible thing, but nobody likes to give due recognition to tree maintenance,” said Sayers, the Michigan forestry leader.

Many cities and states also are reassessing which types of trees to plant, as shifting conditions brought on by climate change upend long-held views about which trees will thrive in a certain region.

“We’re now looking at some Southern species,” said O’Rourke, the Rhode Island resilience officer. “As we look at climate projections, we’re thinking about how we might look more like the mid-Atlantic states.”

Foresters say their programs are often understaffed, and they’re some of the first to face cuts during difficult economic times. Kesha Braunskill, urban forestry coordinator with the Delaware Forest Service, said tree equity programs need to have a stronger workforce and a consistent presence in the areas they’re trying to reach.

“We need more of us, and more of us that look like the communities we serve,” she said. “We have to formulate relationships. We can’t just walk in, plant a tree and walk away.”

This story is from Stateline, an initiative of The Pew Charitable Trusts. Read the story here.