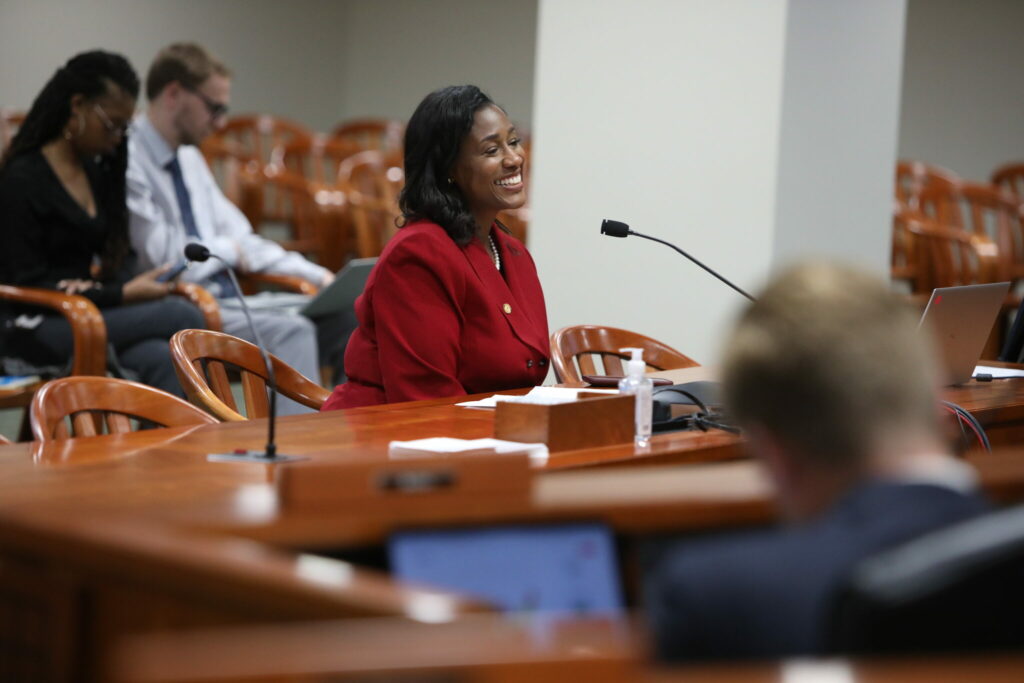 For the past six years, Democratic state lawmakers in Michigan have introduced legislation that would end the sales and use tax on menstrual products.

But, each time the bills were introduced, they never garnered enough support from Republicans that the legislation would make it to the governor’s desk.

This year, state Reps. Tenisha Yancey (D-Harper Woods) and Bryan Posthumus (R-Cannon Twp.) are determined to change that. Both representatives have introduced legislation that would exempt menstrual products from the state’s 6% sales and use tax.

“We hope we can bring this across the finish line,” Yancey said while testifying during a House Tax Policy Committee hearing Tuesday afternoon.

Lawmakers from both sides of the political aisle threw their support behind eliminating the so-called “tampon tax” during the hearing on Yancey’s legislation, House Bill 4270, and Posthumus’ House Bill 5267. Yancey’s bill would exempt menstrual products from the state’s use tax, and Posthumus’ bill would end the sales tax on them.

Because of this bipartisan support — which includes Gov. Gretchen Whitmer — Yancey said she expects Michigan to join a growing list of states that have eliminated taxing menstrual products, including Illinois, Ohio, Pennsylvania and Minnesota, among others.

“There’s a fair amount of support [from Republicans] now that we have a Republican sponsor,” Yancey said in an interview following Tuesday’s committee hearing. “Before Posthumus, there was no buy-in from the Republican side.”

Posthumus said during the committee hearing that he introduced his bill “because it’s just common sense.”

“I’ve had questions all along: why, as a Republican, are you taking up this legislation?” Posthumus said, explaining he did so because there are “common beliefs” among Republicans and Democrats surrounding the bills.

“It doesn’t end at reducing the tax burden on over half of the adult population, it also includes improving our economy, helping to increase productivity in the workforce,” Posthumus said. “It also includes ensuring we’re encouraging health and wellness in our society.”

People who say this is a partisan issue … I vehemently disagree with that. It’s a societal benefit, an economic benefit.

“People who say this is a partisan issue … I vehemently disagree with that,” Posthumus continued. “It’s a societal benefit, an economic benefit.”

Committee Chair Matt Hall (R-Marshall) expressed support for the legislation Tuesday and said he anticipates “we’ll take this up for a vote.”

Yancey said her bill, which is sponsored by 28 other House Democrats, and Posthumus’ legislation would provide some financial relief to struggling families.

In the beginning of the COVID-19 pandemic, constituents grappling with unemployment started calling Yancey’s office and told her they could not afford menstrual products.

“We started buying products and giving them to constituents,” Yancey said in an interview following the hearing. “These products, we know they’re necessary but they’re not always affordable. This [legislation] provides a little relief. It’s a step towards ending period poverty.”

Period poverty refers to the concept that inadequate access to menstrual hygiene products results in people missing work, school and other opportunities “due to the shame, stigma and costs surrounding their periods,” Rep. Padma Kuppa (D-Troy) said during Tuesday’s hearing.

“Eliminating these taxes would provide relief for the economically vulnerable, and they could then have the liberty to use their hard-earned dollars for other essentials like food and rent,” said Kuppa, one of the sponsors of House Bill 4270.

The menstrual products would join a long list of other items that are exempt from Michigan’s sales and use tax, including groceries, medical devices, newspapers and nonprofit fundraiser sales.

The legislation comes at a time when there is a pending lawsuit against the state of Michigan for its taxes on menstrual products. In August 2020, Period Equity, an organization of lawyers fighting to end the tampon tax across the country, helped three women — Emily Beggs, Clare Pfeiffer and Wei Ho — file a lawsuit in Michigan that argued charging taxes “on the purchase of menstrual products is sex-based discrimination.”

Michigan brings in approximately $7 million from the sales and use tax on menstrual products annually, according to a House Fiscal Agency analysis of the bills from both Yancey and Posthumus. Because the Michigan School Aid Fund (SAF) relies heavily on revenues generated by the sales and use tax, Whitmer included a $5 million appropriation in her 2022 fiscal year budget proposal to reimburse the SAF for any lost revenue from abolishing the tax on menstrual products.

“After combatting a global public health crisis for nearly a year now, it’s more important than ever to make sure people can access the affordable care they need. That’s why in 2021, there is no reason we should still be forcing people who are taking care of their reproductive health to pay more for this necessary care,” Whitmer told the Michigan Advance in a February interview.