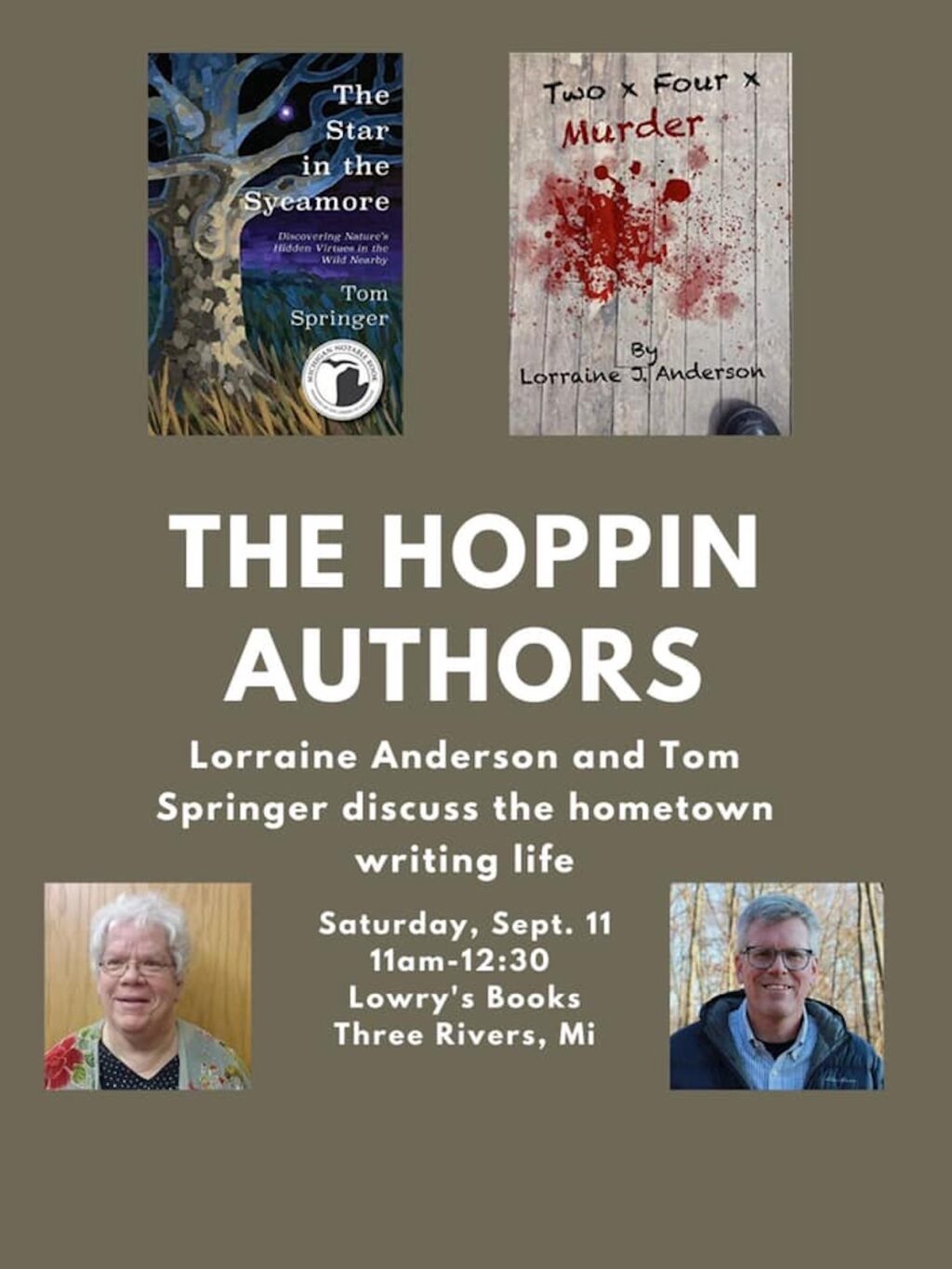 Springer’s most recent book, a collection of essays called The Star in the Sycamore, was published in June 2020. Anderson published a murder mystery, Two x Four x Murder, in March 2021.

The two will share their experiences as writers in the context of the Three Rivers community. Springer said, “As a general format, we’ll discuss how we became writers and some of the benefits and pitfalls of writing in a small town where people know exactly what you’re writing about.” Anderson added, “I always try to hide exactly where I’m talking about, but at least in this latest book, there is one very recognizable character who a long-time resident will recognize. I tried to create a different backstory for him.”

Springer said, “I’ll also discuss the writing process since people often want to know ‘where our ideas come from.’ I know nothing about writing fiction and look forward to hearing how Lorraine does that!”

The authors’ books have little in common in terms of content, but both draw from influences in the local community. “I do know that living in Three Rivers provides fertile ground for writers,” Springer said, noting “the Dickensian characters who hung around my Dad’s barber shop; the wild rivers and woods that are always just minutes away; the free-range childhood that was only possible in the 60s and 70s.”

The name of the event stems from the fact that both authors attended Ruth Hoppin Elementary School together in the same grade from the late 1960s to early 1970s. Springer also wanted to honor Ruth Hoppin, “a phenomenal 19th century woman from Three Rivers: the University of Michigan’s first female graduate, an accomplished botanist who dove for sea creatures (no scuba gear then) in the South Pacific, and taught at Oberlin College. She moved to Park Township as a pioneer and her descriptions of the prairie flora are both stunning and scientifically accurate. What a great role model for girls/women in STEM careers and I hope students at Hoppin School can learn about that.”

What keeps these authors writing? “At the moment, I’ve been going through a dry spell,” Anderson said. “But I enjoy making up stories and characters, even though I’m a lousy liar in person. I wrote a humor column for the school newspaper, and I amuse myself by trying to write in the style of Erma Bombeck and Dave Barry.”

Springer said, “What keeps me writing is when I discover a local story that begs to be told. Small Midwestern towns can suffer from either corny boosterism or an inferiority complex that says nothing important ever happens here. But it does. We just have to take time to write about it.”

Deborah Haak-Frost is the Caretaker for Community Engagement at GilChrist Retreat Center in Three Rivers, and volunteers with *culture is not optional, a Three Rivers-based community development organization.