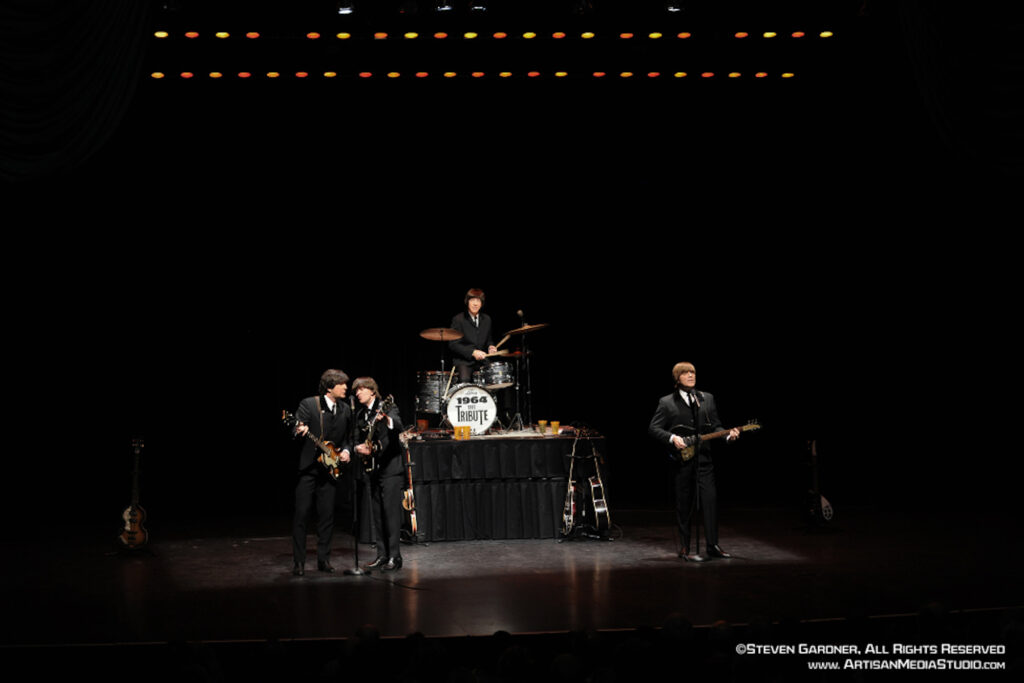 Watershed Voice recently caught up with Mark Benson, founding member of 1964 The Tribute, prior to the band’s upcoming performance at the Riviera Theatre in historic downtown Three Rivers on Saturday, September 18.

The group recreates an early 60s live Beatles concert, with period instruments, clothing, hairstyles, and onstage banter that has earned them the title of “Best Beatles Tribute on Earth.” 1964 will take the stage at 8 p.m. Saturday night, tickets for which can be purchased online or at the Riviera Theatre box office for $40 in advance and $45 day of show.

Without further ado, here’s our interview with Mr. Benson.

Alek Haak-Frost: I know you’ve performed at the Riviera previously but it’s been at least two years since that last performance due to the pandemic. How did 1964 navigate the pandemic?  Did the band stop touring and if so, how long was it before the guys returned to live performances?

Mark Benson: We were shut down the first week in March 2020 like most of the live entertainment world, and for 15 months we had no work. We had a blast filming  and producing a “Covid19 64 Stay-At-Home” video, which you can find on the home page of our website 1964thetribute.com.

AHF: 1964 The Tribute prides itself in being as true to The Beatles as possible, what are some ways the band attempts to bring their music and that era to life? And how much does that impressive hair cost?

MB: When we started this in 1984, we wanted the look and sound to be as close as we could get it so that the audience could experience what it was like to see a real Beatles concert. To that end, we scoured trade papers, want ads, and music stores to acquire the same instruments, amplifiers, strings, drums, drum heads and sticks The Beatles used. Now the suits were another story! We searched tuxedo warehouses for the older velvet collar black tuxedos and had them altered to look more like the early 60’s British styles the English beat groups were wearing.

I’m sure I don’t know what you mean.

AHF: What song do fans request most, and what’s the band’s favorite song to play? Do you have a set list prepared for the Three Rivers show, and if so, do you care to share it with those planning to attend?

MB: I couldn’t begin to pick a favorite request. They are as varied as The Beatles catalogue. Our show focuses on the early period from 1963-1966 and there are so many fan favorites in those first seven album releases. I can’t speak for the others, but a few of my faves are “In My Life” and “And Your Bird Can Sing.”

Instead of providing a set list, I’d rather the audience hear it fresh, if that’s OK.

AHF: 1964 is made up of a very talented and versatile collection of musicians, who are they and how long have they performed with the band?

AHF: What would you say to folks considering attending this weekend’s show? What can they look forward to seeing when the lights go down and 1964 takes the stage?

MB: We try to show them a glimpse of what it would’ve been like if they were lucky enough to have a ticket to see The Beatles in concert. All the terrific pop songs, screamers and ballads from those early touring years.