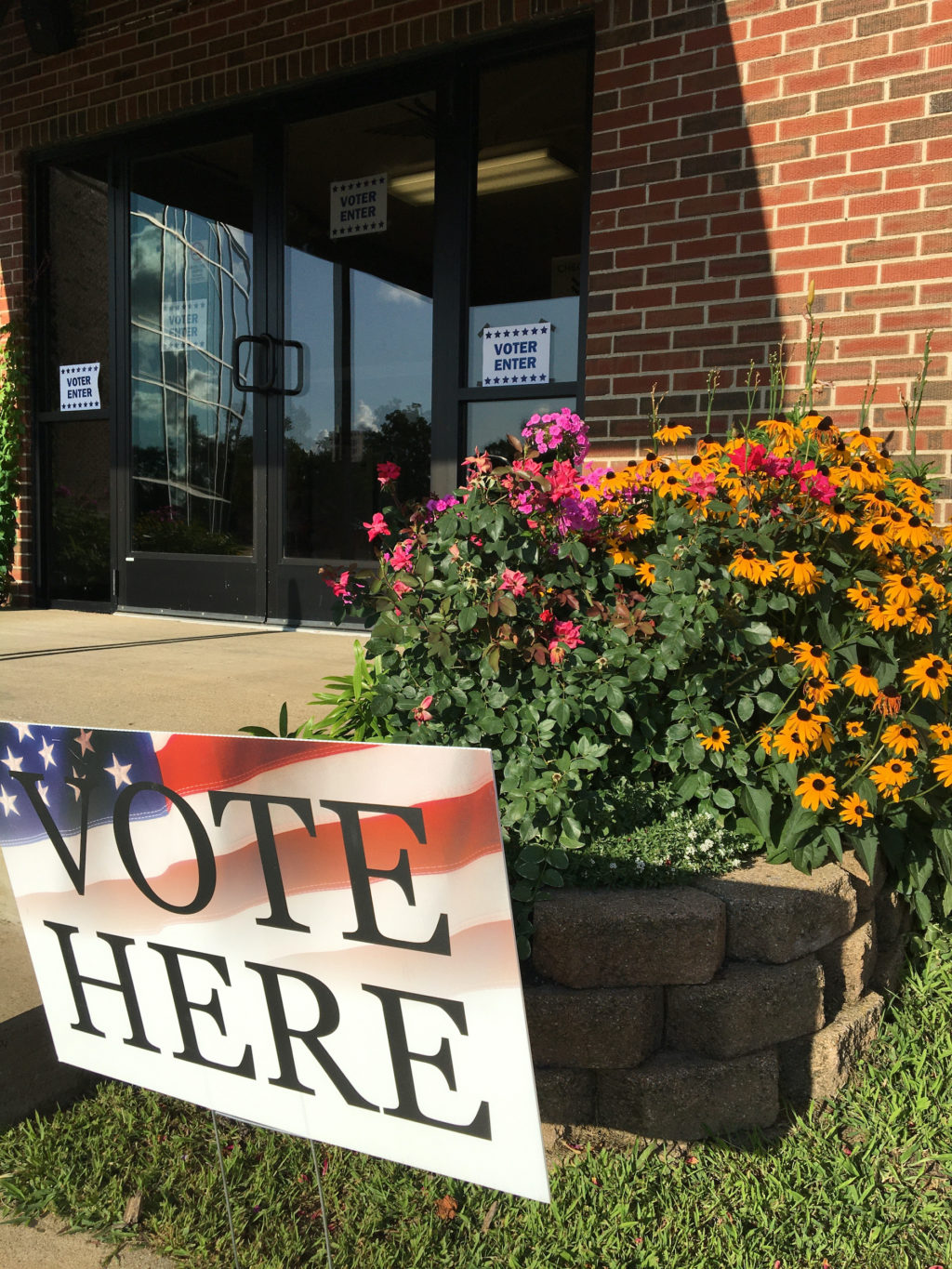 The entrance to the Three Rivers poll station at Riverside Church in August 2020. (Dave Vago|Watershed Voice)

Hundreds of Michigan cities and townships are at risk of losing all or a few of their polling places if a provision within the controversial, Republican-led “Secure MI Vote” petition was enacted, according to a new report from Progress Michigan.

The Progress Michigan report, released on Wednesday, explored the provision in the Secure MI Vote petition that would prohibit clerks from accepting private money or in-kind contributions for election-related ventures. This provision would limit clerks from utilizing nonprofit properties (churches, places of worship, etc.) that were previously donated as polling spaces unless clerks bought them out. Churches and places of worship accounted for 20% of Michigan polling places in the 2020 election.

In total, about 214 cities and townships—out of 1,309 cities and townships that had polling places in 2020—could see all or some of their polling sites vanish, according to the report from Progress Michigan, a liberal nonprofit that’s based in Lansing and advocates for voting rights.

In a press conference unveiling the report, Sam Inglot, Progress Michigan’s deputy director, said it is “crystal clear” that the provision within the initiative will have a “negative impact” and affect clerks’ capability to fulfill their job responsibilities and voters’ access to the ballot box.

“The negative impact on voters and clerks from this provision is likely to be huge,” Inglot said. “It’s clear that this ban on donated polling location space from places of worship will cause confusion and disruption for voters leading to voter disenfranchisement, create challenges for clerks who would have to find new polling place locations or reduce the number of polling places available and increase costs for election administration.”

Half of Michigan’s 83 counties could lose polling places; 41 counties had at least one church or place of worship as a polling place in 2020, the report specified. Genesee, Kalamazoo, Kent, and Ottawa Counties—home to more than 1.5 million Michiganders—could lose approximately half of their polling places.

Mary Clark, president of the Michigan Association of Municipal Clerks and Delta Township’s clerk, said at the press conference that churches, schools and senior centers were all making in-kind contributions by allowing polling places to be set up at their properties. She said under the new provision, local clerks would have to rent or buy space, which many jurisdictions would be incapable of doing.

“There’s a growing panic about the implications, whether they’re intended or unintended consequences is irrelevant,” Clark said. “It’s their consequences to voters. And the Michigan Association of municipal clerks is focused on voters and clerks. We focus on education for clerks and working to make the voting experience as positive for our voters as possible. The ban on any in-kind contribution would be devastating.”

In order for a property to qualify as a polling place, it must meet numerous legal requirements, such as being accessible for disabled voters. A polling place must also be accessible via public transportation, have parking spaces, be able to securely store voting equipment, and have 24-hour access for a few days before and after an election.

The ballot initiative has no requirement that Michigan lawmakers allocate additional funding to local election clerks to cover costs of the new polling places. Thus, according to the report, it is likely that minimal funding and reduced polling places could create extensive lines for voting and voters having to trek greater distances to get to the polls.

The Secure MI Vote petition was initiated after dozens of Republican-backed, voter restriction bills were introduced in the Michigan Legislature. Many of the bills have since been vetoed by Democratic Gov. Gretchen Whitmer.

The ballot initiative would enable Republicans to bypass a veto by Whitmer. The Legislature can approve a law if more than 340,000 voters sign a petition to create a ballot measure. If the GOP-controlled Legislature votes in favor of the petition, it can avoid a vote by the public and the governor would not be able to veto its enactment.

The Secure MI Vote petition has a little more than five months left to collect the minimum requirement of signatures before lawmakers have the ability to vote on it.

Inglot said the report Progress Michigan released is only a “sampling of the damages the proposal could cause” and that the provision prohibiting in-kind contributions within the Secure MI Voter petition alone “should concern every voter across Michigan.”

“The impact of the secure my vote proposal will be felt in every township and city across the state,” Inglot said. “The Secure MI Vote proposal is an incredibly broad sweeping proposal that will lead to disenfranchise voters, create problems for clerks, and make running our elections more cumbersome and expensive.”