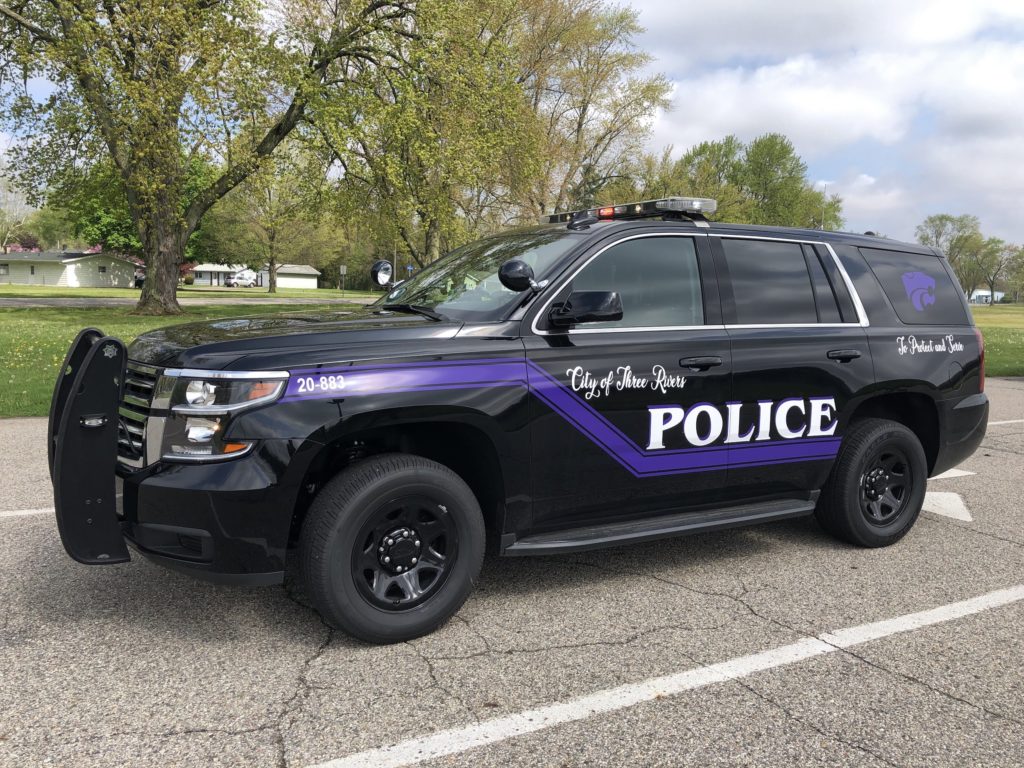 This week’s Sow Good Seeds column departs from the environmental theme of most of my writing, but I’d like to share a story of a recent experience. I try to write columns that encourage us to look at how connected we are to the world around us. I hope this will shed light on the community relationships that are possible when honest and respectful communication is a priority. When we care for each other, we care for the whole.

In August of 2019, the Three Rivers City Commission approved the purchase of three new vehicles for the police department. During the public comment time regarding the purchase of these vehicles, I asked the Commission to consider making the markings on these new vehicles more visible than the markings on the existing vehicles in the fleet, and to consider clearer markings for existing vehicles.

In research I’ve done, I’ve found that police vehicles in many developed countries around the world are marked with neon colors, bright patterns, and clear labeling, much like ambulances. By contrast, most Three Rivers Police Department vehicles are marked so subtly that the lettering is hard to see in daylight, following the trend of many American police vehicle markings. The lettering does reflect light at night when a light, such as a car’s headlights, is shone at the lettering.

I am in full support of our police department receiving the equipment it needs; I simply wanted to know if our officers could be more visible when they are out in the community in their cruisers.

I wrote a letter to the editor of the Three Rivers Commercial-News and read the letter during the public comment portion of the next Three Rivers Commission Meeting, stating my perception that an absence of trust and transparency may be a factor playing into the decision to mark police vehicles in the current manner. I did so before engaging in dialogue with the police department, and in that respect, I believe I was in error.

Police Chief Tom Bringman, who was not in attendance at the meeting during which I shared my initial comments, approached me after the second meeting and initiated a conversation. He seemed a bit taken aback by my assertions, but patiently asked clarifying questions, explained past decisions, and shared his viewpoint on the topic. He admitted he had not considered it from my perspective, and solicited input on changes that could be made to the markings for these new vehicles (or at least one, based on the types of vehicles being acquired). Our discussion continued over email.

It was a number of months before the vehicles would arrive, and soon the interaction was filed away in my brain.

Recently, I did a double-take while going past the police department: was there white lettering — and purple — on that cruiser? I looped through the parking lot to get a closer look, and indeed, my eyes had not deceived me. I promptly emailed the chief with a thank you note.

While I stand by my conviction that police vehicles best serve the community when they are clearly marked, I could have started with a personal conversation, rather than making a public statement — hollering into my megaphone without listening to the response. I could have asked a question without already anticipating the answer, approaching with a spirit of curiosity rather than suspicion.

These are completely valid, and do need to be addressed.

But maybe someone else has the same concern. Maybe we can speak for those who don’t have a voice at the table. Maybe having conversations is the key to building trust (the same trust that I claimed to value, yet didn’t act upon), especially in these times. Maybe conversations are the starting point to creating policies, practices, and expectations that build a resilient system of networks that can rely on each other, in times both sunny and stormy.

Deborah Haak-Frost is grateful for every ray of sunshine that reaches her skin. She is the Caretaker for Community Engagement at GilChrist Retreat Center in Three Rivers, and volunteers with *culture is not optional, a Three Rivers-based community development organization.