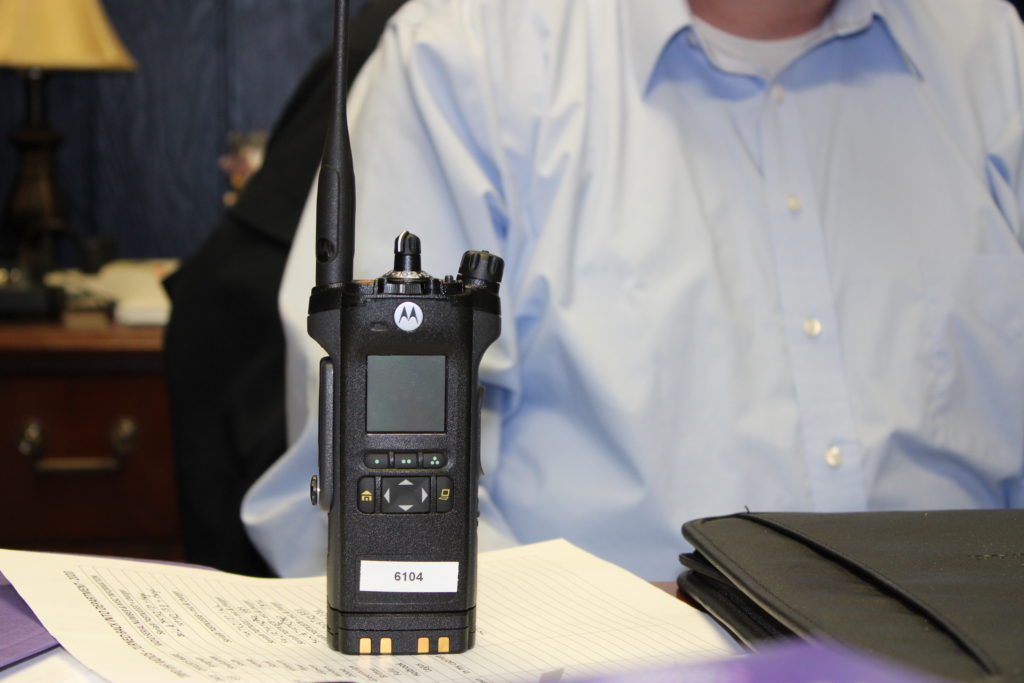 "The whole idea behind us moving to this, is this is a statewide system. So to come onto this system every officer has to be trained on it, and part of what we talk about in the training is these bring interoperability. We talked about (the Oklahoma City bombing) in 1995, Columbine and 9/11 — everyone of those had public safety agencies who couldn't talk to each other — so you have fire departments and ambulances, police and SWAT but there was no interoperability so one agency couldn't talk to the other." — Det. Sgt. Sam Smallcombe

Smallcombe will answer questions from readers and WSV staff alike twice a month to provide a platform “for information sharing” and “clearing up misconceptions.” If you have a question you would like to ask the detective, email Watershed Voice at [email protected], message us on our Facebook page or give us a call at (269) 244-6055.

The following interview took place on Thursday, May 7 at the Three Rivers Police Department with Det. Sgt. Sam Smallcombe, and was conducted by Executive Editor Alek Haak-Frost.

Out with the old, in with the new

Alek Haak-Frost (AHF): How long has the process of implementing the new radio system taken and why was this upgrade so important?

Det. Sgt. Sam Smallcombe (SS): This all started — I looked it up — it was two years ago, we did the millage for (St. Joseph County) Central Dispatch that passed*, and the whole idea was we were going to go from our old VHF system onto the state’s system, the 800 MHz.

*(Central Dispatch’s millage request for an additional one-quarter of a mill to pay for the replacement of radio equipment at its headquarters, as well as all mobile radios in police and fire units within the county, and to equip every police officer and firefighter with a new radio was approved by voters in May 2018).

The whole idea behind us moving to this, is this is a statewide system. So to come onto this system every officer has to be trained on it, and part of what we talk about in the training is these bring interoperability. We talked about (the Oklahoma City bombing) in 1995, Columbine and 9/11 — every one of those had public safety agencies who couldn’t talk to each other — so you have fire departments and ambulances, police and SWAT but there was no interoperability so one agency couldn’t talk to the other.

And that’s the whole idea with this 800 MHz system, that everybody can talk to everybody. So when we have a major event like 5th Avenue, we can call out and switch to H Zone 22, and everyone has one of these radios so they can switch over to H 22, and we can all communicate, we all know what’s going on. So that’s the beautiful part about it.

AHF: You mentioned before that this is a statewide system, why is that useful to the TRPD?

SS: It gives the capability to talk just about everywhere in the State of Michigan. I don’t know if we would ever use it for this purpose but we could talk to someone in the U.P. if we wanted to.

But the bonus in my mind is — if I have some guys that are doing a prisoner transport or picking somebody up and they’re traveling outside of our area or even if an ambulance is doing a transport for somebody — and all of a sudden you have an emergency and you’re outside of what normally could be covered by our old VHF radios, these you can switch over to a statewide talk group and you can talk to regional dispatch and say, “Hey, I’m in Jackson County, I-94 and Airport Road, I have an emergency, send the cavalry.”

So you can communicate wherever you are, you’re not relying on your cellphone, you just pickup the radio and you’re able to talk. Not only does it give us interoperability but it also gives us statewide communication, so wherever in the State of Michigan we go, we know we can communicate.

AHF: I was going to ask because everyone has listened to a police scanner, it’s not always crystal clear what is being said. What’s the difference in audio and connection quality versus the old system? Before you guys were dealing with really outdated equipment, right?

SS: It was 1970s technology, the old one, and the other problem with the old system — it was analog — so you could press the button and start talking into it but you didn’t know if you were hitting the tower or what you were hitting the tower with was static or not. With the new radios it’s all digital, so it’s 1’s and 0’s going out, 1’s and 0’s coming back out the other end.

If you don’t have enough signal to get out, the system isn’t going to let you talk, which could be frustrating because when you hit it and you hear the BONK sound, you know you’re not getting out but on the plus side, before you weren’t sure if you were getting out, now you do.

AHF: And if you have to go to your cellphone, that’s when you use your cellphone, right? But if you’re out in the field and you’re in a situation, talking via radio is a lot easier when it’s strapped to your shoulder versus getting out your cellphone. It’s instance access and when you have a situation like 5th Avenue you need to be in constant communication with those around you.

Today everyone is connected by way of social media and other technology, so theoretically you could be at a disadvantage if you can’t communicate with each other directly, across agencies, right?

SS: Absolutely. And these radios have better coverage than cellphones do. When the radio system was initially designed it was designed for 97 percent all-weather mobile coverage, which is our car coverage throughout the State of Michigan, now they say the system is 98 percent portable coverage throughout Michigan. So that’s better than a cellphone. That was a big selling point they gave us during training; these radios work in places where cellphones don’t.

AHF: And when you police a rural area, it’s a good thing to have because the TRPD assists St. Joseph County Sheriff’s Department and other agencies around the county. So the idea that you’re able to communicate even when you’re out in the sticks is comforting, I’m sure.

SS: Yeah, because I know if you drive out to Coon Hollow Road, the further you get toward the Cass County line, cellphones don’t work out there. And these work great. One of our guys lives way out there and he took his portable home and said, “Yeah, I was getting great signal out there.” So they work just about everywhere in St. Joseph County.

AHF: So anyone who is out in the field — police, fire, EMT — has access to one of these new radios?

SS: Yes. Some agencies are issuing each individual a radio and others are operating from a pool, that’s really up to them.

SS: Three Rivers Police, each officer was issued a radio that they’re responsible for. Each radio has an ID number, it’s kind of like it’s own telephone number, and those are programmed into the console over in Centerville (at Central Dispatch).

So if for whatever reason you’re having some kind of emergency, and you can’t talk, they can see your radio ID that’s programmed to your badge number so they know who it is, they know where to send help.

Sam Smallcombe is a Sergeant with 18 years of experience with the Three Rivers Police Department currently assigned as the department’s Detective. He is a Three Rivers native and currently resides in Three Rivers with his wife and children including a spoiled black lab, and a mini rex named Voldemort.