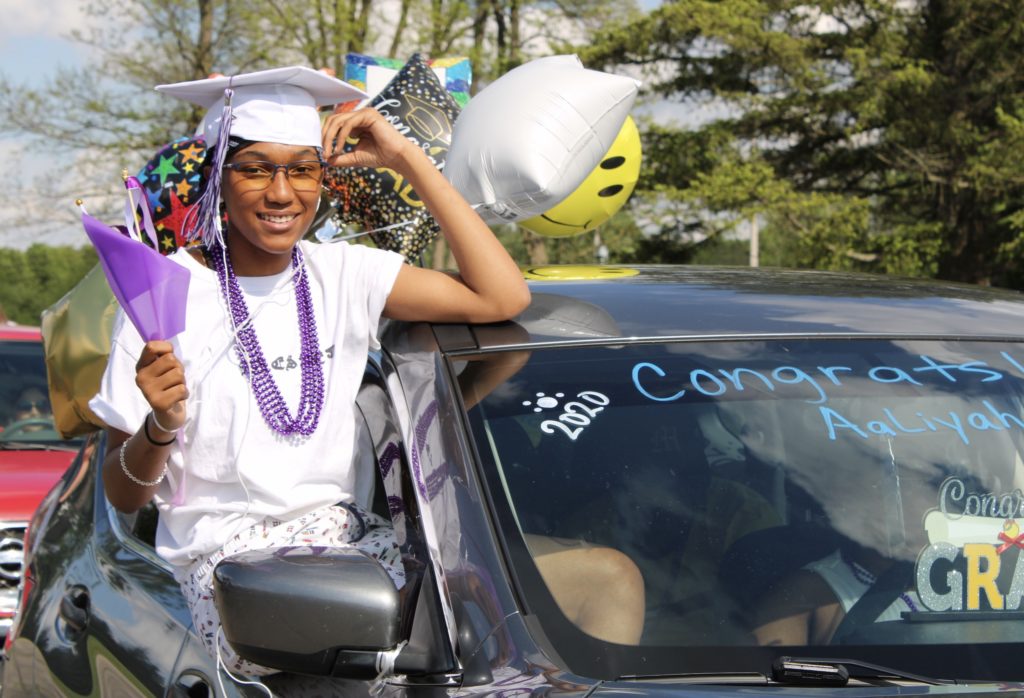 Three Rivers senior Aaliyah Washington poses for a photo moments before the start of a 93-car commencement parade for the Three Rivers High School Class of 2020 on Friday, May 29. (Deborah Haak-Frost|Watershed Voice)

In the minutes leading up to Friday’s community celebration for graduating Three Rivers High School seniors, the student parking lot was laden with joyful faces, decorated cars, and a sense of normalcy that’s been elusive amid a global pandemic, social unrest, and the uncertainty that lies ahead for graduates and Americans alike in the weeks and months to come.

But those concerns were briefly put aside to celebrate the academic achievements of the Three Rivers High School Class of 2020. The event, originally scheduled for Thursday, May 28, was postponed and rescheduled for Friday due to weather, but the extra wait did not put a damper on the day’s festivities.

Between 2 and 4 p.m. seniors picked up their diplomas dressed in cap and gown in the staff parking lot where they also had their photo taken. At 4:45 p.m. students and their families lined up in vehicles in preparation for the community celebration.

At approximately 5:15 p.m., led by Three Rivers Fire Department engines and others, the parade of approximately 93 vehicles made its way in front of the high school and around Three Rivers Middle School, before making its way to M60 to Hoffman Road to North Main, where seniors were greeted by a crowd of support as they made their way through downtown and onto West Michigan Avenue before returning to 6th Avenue and Three Rivers High School.

Zach Robare, who teaches history at Three Rivers High School, said they hope the commencement parade is the first of many to come.

“It was great to see the community come out to support the seniors,” Robare said. “I hope it is the start of a tradition.”

Choir teacher Alex Williams, who helped pass out diplomas Friday, was taken with the energy and atmosphere of the event.

“What was really amazing was the energy of it all,” Williams said. “Seeing the seniors receive their diploma was just as amazing and satisfying as if they were on the stage. They took what they could in these unfortunate circumstances and made the best of it, proving they will be ‘TR Strong’ for the rest of their lives.”