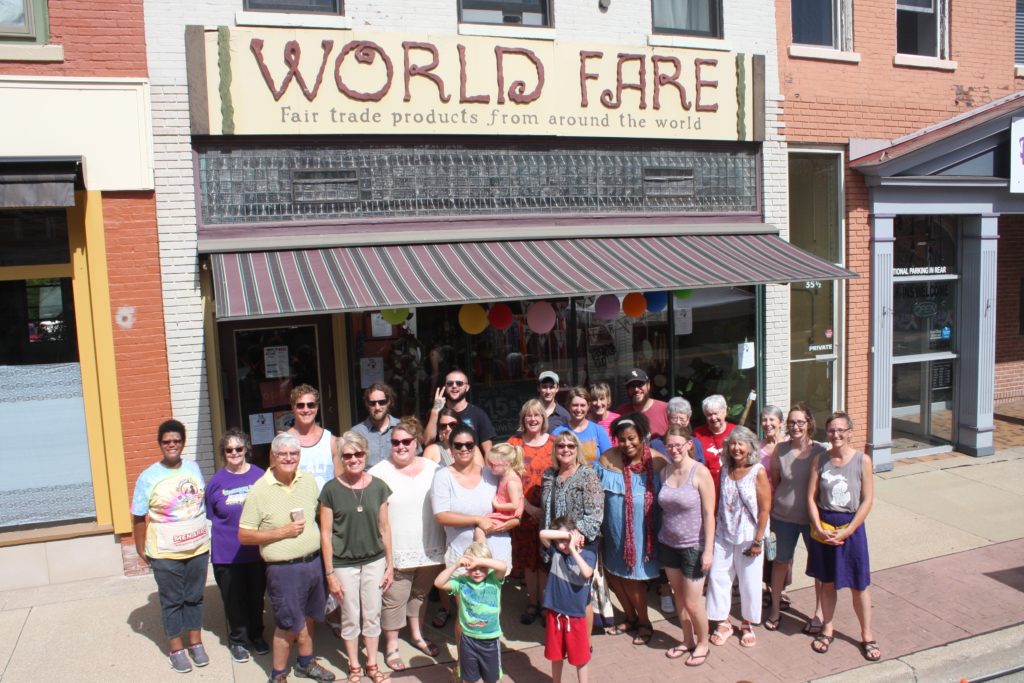 In September 2018, World Fare celebrated 15 years in downtown Three Rivers with this group photo of its volunteers. (Alek Haak-Frost)

Loan funds will be used toward the purchase of equipment and inventory that will enable the store to sell groceries. The Executive Committee and staff are authorized to resolve some details in the loan’s terms before entering into an agreement with World Fare and making the funds available.

In his May application, World Fare’s Rob Vander Giessen-Reitsma recognized the drop in business the store experienced in the wake of the COVID-19 pandemic.

“We researched what needs were currently in the community and how we might meet them in a way that would help sustain our store during these uncertain times,” he said. “[…] We have decided to expand our mission beyond fair trade to include local, organic, and natural foods. […] We plan to offer online ordering of food items with curbside pickup and, potentially, local delivery.”

Still to finalize are details relating to collateral and monthly payment terms. During Friday’s TRDDA board meeting, Vander Giessen-Reitsma expressed a willingness to make available any necessary information about collateral, and allow for the possibility of a promissory note. The Executive Committee will also work with World Fare to finalize an interest rate and other payment terms. Loan funds come from the United States Department of Agriculture; the loan fund balance is $44,090.30.

According to TRDDA Vice Chair Michael Hogoboom, Michigan Main Street staff have encouraged small businesses around the state to consider selling groceries in response to the pandemic.

“The equipment being purchased will help bring that to bear and provide [World Fare with] additional cash flow,” Hogoboom said. “It’s there and meant to be used.”

The TRDDA voted Friday to take part in a state-authorized work share program meant to offset revenue loss from the pandemic. Under the program, a municipality can reduce full-time employees’ weekly hours from 40 to 32 during June and July, with salary adjusted accordingly.

The employee is eligible to file for unemployment and pandemic relief benefits to cover the reduced income. TRDDA Board Chair Andrew George said he worked with Finance Director Cathy Lawson to make the tentative request prior to June 1 so it would be available to Meyer in the event of a favorable vote. Meyer said the effects of the pandemic meant that a work week of “32 hours is sufficient for my workload for now.”

•The board voted to award a $400 rebate to the Three Rivers Public Library to defray the cost of signage at its new Main Street location, split evenly between two signs. There was some debate prior to the vote.

Board Chair Andrew George relayed that the Executive Committee initially declined to support the award on the basis that the signage rebate program was meant to attract private businesses, but that they were enthusiastic about the library’s presence on Main Street, and would work to find other ways to show support.

City Manager and Board Member Joe Bippus said, “the library is investing millions of dollars into downtown, and $400 seems like a small way of showing meaningful support,” while also noting that library and TRDDA personnel would likely depend on each other for programs and events.

Hogoboom said the TRDDA’s overall fund balance is near its safety limit and advised that “with things changing so rapidly it’s nice to have as much cushion as possible.” Meyer said there was still $1,000 left in the rebate fund’s budget for the current fiscal year, which ends in three weeks.

Bippus offered to donate $200 to the rebate fund; George offered to discuss that at another time. The motion to award the rebate passed with nay votes by Hogoboom and Colin Monroe.

“I don’t think it’s appropriate to discuss donations when it’s time to vote,” Hogoboom said in reference to Bippus’ proposal during Friday’s meeting. “That feels a little bit like a bribe. It is a generous [offer of] donation, and we want to show support to the library. If we had a surplus of money, I might feel entirely different, but I feel this could be much more impactful to a small business.”

In a follow-up with Watershed Voice after Friday’s meeting, George addressed Bippus’ proposal.

•The TRDDA authorized Meyer to sign a new lease for its office location at 57 N. Main St. Previously, the board voted to close the office to save money for the 2020-21 fiscal year. However, the building recently sold, and according to board member Tim Raakman, the new owner, ALD Homes, has offered to cut the monthly lease rate from $450 to $250 through a rebate, which would also cover internet and utilities.

The owner would require TRDDA to purchase renter’s insurance, which Meyer estimated would cost between $350 and $500 per year. Since any budget changes must be announced in advance, the board will have to amend the budget for the coming fiscal year at its next meeting to accommodate the lease. George and several other board members called the offer “generous.”

•According to Meyer, TRDDA’s attorney David Marvin has asked the board to seek other legal counsel since he is currently running for St. Joseph County Prosecutor. Meyer received two proposals for legal services from Luke Nofsinger and Michael O’Connor. Nofsinger proposed an hourly rate of $125. O’Connor proposed a rate of $150 but offered to attend monthly TRDDA meetings at no cost. The board passed a motion to enter into a contract with O’Connor starting July 1, with John Wolgamood abstaining.

•Wolgamood reported the Promotions Committee has not made a firm decision yet on whether it will cancel its two annual summer events, Sass in the City and HarmonyFest. He said he would like to see the events happen, but that preparation and fundraising time has been shortened by the COVID-19 situation. The committee is considering a possible “grand re-opening” event for downtown instead, but is still weighing its options.

•Meyer reported Main Street has lost one business during the pandemic. Allie Jane Boutique will remain in business but has decided not to renew the lease on its storefront. Some restaurants and other businesses are open and working around social distancing challenges; Meyer said Gov. Gretchen Whitmer has announced salons, spas, and gyms will be able to open on June 15. Bippus mentioned Three Rivers City Hall would open on a limited basis starting on the same day.

•Meyer noted that the Three Rivers City Commission approved its $25,000 contribution to the TRDDA budget, saying she “just wanted to acknowledge the city, and make sure the board knew that it was included, and to thank the city for their support.”

•Meyer observed that the limit on in-person meetings has not yet been extended past June 15. George recommended the TRDDA continue to meet via Zoom for the time being.