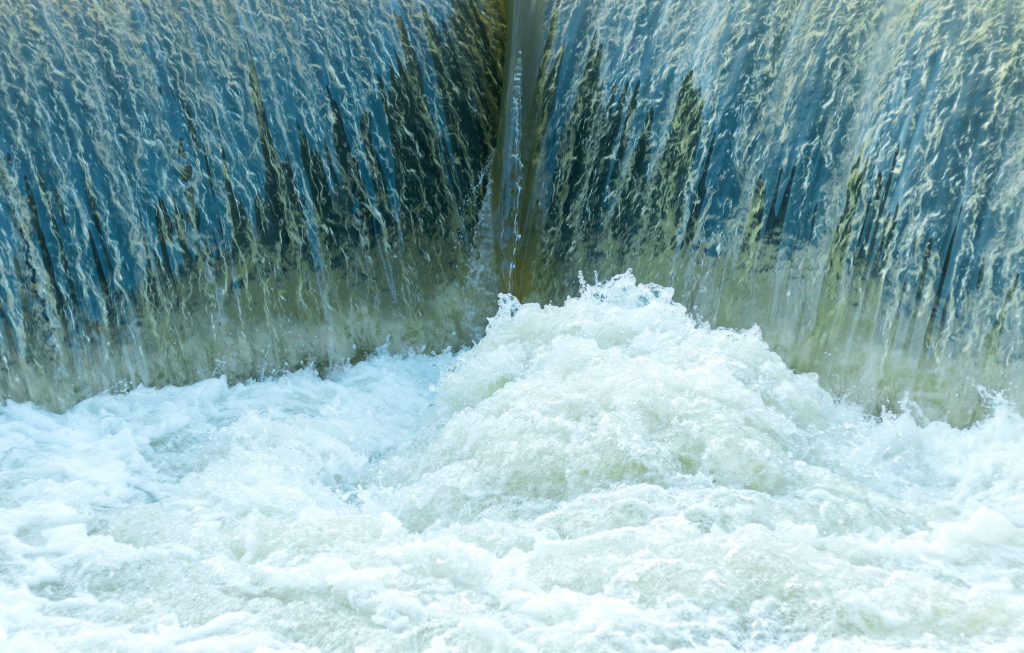 Regulation in some cases sorely lacking

Following the Edenville Dam failure in Midland County, Michigan on May 19, Watershed Voice began an investigation into the condition and regulation of St. Joseph County’s “high hazard” dams. After a month of information gathering that included hours of research, multiple interviews, and several FOIA requests, it became apparent that the amount of substantive information available concerning many of the county’s dams is scant at best.

The average age of a dam in St. Joseph County is 107-years-old, and five of St. Joseph County’s 17 dams or overflow structures are considered high hazards, according to information provided by the Army Corps of Engineers, which means dams “where failure or mis-operation will probably cause loss of human life.” All five of those dams – Sturgis, Mottville, Three Rivers, Constantine, and Portage Plant – have emergency action plans and are either state regulated or federally regulated.

Watershed Voice looked into the three dams that are upstream of Three Rivers: Sturgis, Three Rivers, and Portage Plant.

Most Michigan dams are privately owned. The owners of dams that contain active hydroelectric generating plants often refer to them as “projects.”

Several factors influence who regulates each of the many dams around the state. Dams with active hydroelectric power installations, or that meet certain other requirements, fall under the jurisdiction of the Federal Energy Regulatory Commission or FERC. FERC regulates inspection, structural condition, design, and other engineering factors for these dams, as well as some ecological factors. Dams in Michigan fall under the purview of FERC’s Chicago Regional Office.

The Michigan Department of Environment, Great Lakes, and Energy or EGLE, has oversight over the remainder of the state’s dams, including those with either inactive power plants or no power plants. The agency’s staff, whose capacity is limited, can have inspection and regulatory responsibility over some environmental and ecological factors, as well as some safety and structural factors. EGLE maintains a database of all the dams under its jurisdiction, with inspection dates and last known conditions for each. Non-FERC St. Joseph County dams fall under the jurisdiction of EGLE’s Kalamazoo District Office.

The Portage Plant Dam maintains the water level in Hoffman Pond, which is east of Portage Street and immediately north of the bridge where Hoffman Street crosses the Portage River in Three Rivers. The Hidden Marsh Sanctuary is located at the pond’s upper end.

There is a concrete spillway at the dam’s west end, and a small, long-abandoned abandoned brick power station at its east end. The power station — a small, cube-shaped, derelict brick building along the Hoffman Street connector between Portage Street and Highway M-60 — is easily recognizable to motorists. In between the spillway and the former power plant is an overgrown earthen berm which forms an island as it holds the pond back. The Portage Plant Dam is also known locally as the Boy’s Dam and was built in 1922.

The Portage Plant Dam is immediately upstream from the Kadant-Johnson plant, as well as a number of residences between Hoffman Street and downtown Three Rivers. It is just under one mile upstream from where the Portage River empties into the St. Joseph River, in front of the Sue Silliman House on South Main Street.

Watershed Voice was unable to confirm exact dimensions for the dam or the pond, but the U.S. Army Corps of Engineers’ National Inventory of Dams shows a holding capacity of 1300 acre-feet for the dam, which would cover 1,300 acres of land with one foot of water – the equivalent of 1,300 eight-lane swimming pools. At this capacity, the pond would contain 56,628,000 cubic feet of water.

Because the power station at the Portage Plant Dam is defunct, it falls under EGLE’s jurisdiction. A 2019 Associated Press article about structural problems in dams across the country cited EGLE documentation that listed Portage Plant as a high-hazard dam in unsatisfactory condition, and that it was overdue its state inspection requirement by 11 years as of 2018. According to that article, it was last inspected in July of 2002. The EGLE database shows the same date, and calls the dam’s condition “poor” and its downstream hazard potential “high.” A high-hazard dam means that a failure could lead to loss of human life, regardless of its current condition.

BridgeMI’s June 5 coverage provides additional detail, citing an inspection from 2013. According to that article, the dam’s owner has not submitted required inspection reports and emergency action plan updates, and according to a statement on the 2013 inspection by EGLE spokesman Hugh McDiarmid, EGLE “believes there are no structural or hydraulic deficiencies that pose an immediate threat to the dam’s safety.” However, in the same statement McDiarmid said “EGLE will consider escalated enforcement action if the owner continues to be nonresponsive.”

Watershed Voice reached out to EGLE’s Kalamazoo District Office on June 8 for additional detail and comment on the Portage Plant Dam and other Three Rivers area dams, including explanations for the discrepancies and apparent contradictions between the various articles, reports, and other sources describing the Portage Plant Dam. Our staff followed up on June 17, but as of press time, EGLE has not responded.

There is at least one other dam on the Portage River upstream from the Portage Plant Dam. The EGLE Database of Dams lists the Cook’s Mill Dam of Kalamazoo County as last inspected in 2002, in satisfactory condition. The database lists another dam called the Taylor Dam in Kalamazoo County as having an unrated condition and having last been inspected in 1993. It is unclear from Google Earth satellite imagery whether that dam is still there, though it appears to be gone. St. Joseph County removed a former low-profile millpond dam, the Parkville Dam, in 2015.

Also in Three Rivers is an active hydroelectric dam that spans the St. Joseph River between Wood Street and the intersection of 8th Street and River Street. This dam, which was built in 1917 and rebuilt in the 1980s, is 1,321.6 feet long and 16 feet high, constructed of concrete, and holds back a reservoir of 601 acres. Its active power plant contains three turbine generators.

The City of Sturgis purchases the power that the dam generates from its owner, the Grande Pointe Power Corporation, which is a wholly-owned subsidiary of Renewable World Energies LLC of Neshkoro, Wisconsin. Watershed Voice reached out to Jason Kreuscher, Vice President of that company for comment.

“The project is inspected, regulated, and licensed by the Federal Energy Regulatory Commission (FERC) as set forth by the Federal Power Act,” Kreuscher said. “The Three Rivers Project is in compliance with all federal and state regulations regarding dam safety and compliance.”

The dam has a license that was issued on September 1, 2003 and expires on November 30, 2036. Its hazard rating is high due to downstream buildings and population that would be in its flood path. Grande Point has owned the dam since 2014.

The dam’s parent company operates a foundation called the Renewable World Foundation, which provides “Day at the Dam” educational programs and class tours to schoolchildren about renewable energy. According to the foundation’s website, “In class energy presentations can be followed by an in-plant onsite renewable energy station tour during which water safety, boating safety, electrical safety, and environmental impacts are covered. If there is time, solar panels are hooked up and run as a team competition.”

Further upstream on the St. Joseph River, about 2,000 feet downriver from the Langley Covered Bridge, is the Sturgis Dam. As its name implies, it also provides electricity for the City of Sturgis, which has owned it outright since its construction began in 1909. The dam was placed online in 1911, and final construction finished in 1912. A celebration took place in 2011 at Covered Bridge Park to mark the dam’s centennial.

Structurally, the Sturgis Dam is an earth-fill embankment 308 feet long and 24 feet in height. Its spillway includes 22 gates, and there are two original generators in the powerhouse, and two that were added in an expansion that started in 1982 and was finished in 1983.

“As part of the expansion, the city applied for, and received, an operating license from the Federal Energy Regulatory Commission, or FERC,” Griffith said. “The license includes an annual inspection by the FERC.  A typical inspection includes a visual inspection of the powerhouses, concrete dam and earthen dam.  They also review operating records and project security.

The 2019 report noted no immediate dam safety concerns and that the city was addressing the spillway capacity issue.”

During the summer of 2016, Sturgis officials drew the lake down by three feet in order to make emergency repairs to the embankment.

“Seepage developed at the interface of the concrete dam and earthen embankment. As a precaution, the reservoir was drawn down and grout was pumped into the earthen embankment,” Griffith said. “To develop a long-term solution, the city is working with its consultant and the FERC. The final design will include the grout mattress replacement, toe drain addition and raised earthen embankment. Options to address (a) capacity issue mentioned in the 2019 FERC Annual Report are being pursued and include negotiations with downstream property owners and the possible effectiveness of additional control structures at the project site.”

The 2019 Associated Press coverage reported the Sturgis Dam is a high hazard dam in unsatisfactory condition, was two years overdue in its state inspection requirement as of 2018 and was last inspected in 2011. A May 20, 2020 BridgeMI article that cited the Associated Press coverage, noted the Sturgis Dam and Portage Plant Dam were among 19 Michigan dams listed in unsatisfactory condition, and among 172 that have high hazard status.

It was not clear from Griffith’s comments to Watershed Voice whether the state inspection concerns at the Sturgis Dam have since been addressed, but the FERC inspections that he referenced may supersede them.

A June 8, 2020 BridgeMI article on the collapse of the Edenville Dam, which subsequently overwhelmed a second dam downstream and flooded the City of Midland, brought to Watershed Voice‘s attention some of the regulatory and inspection failures that led to that event.

“Federal regulators revoked the dam owner’s license to generate hydroelectric power in 2018 after years of missed deadlines, which moved regulatory oversight to the state,” the article reads. An October 8, 2018 letter from EGLE inspector Jim Pawloski confirms the article’s information.

In that letter, based on an October 4 inspection of the dam, Pawloski wrote, “During the inspection, the dam was observed to be in fair structural condition. Its earthen embankments were well maintained, with only a few bare spots, minor erosion, and no visible signs of significant distress (sloughs, slumps, differential settlement, cracking, sinkholes, etc.).

“All embankment drains appeared to be functioning. The dam’s two concrete spillways showed signs of moderate deterioration (spalling, exposed reinforcing steel, minor cracking and efflorescence), but appeared to be stable and functioning normally. All spillway gates appeared to be operational. No flow was discharging through the dam’s powerhouse, but the structure and generating equipment appeared to be in fair condition as well.

“As such, there were no observed deficiencies that would be expected to cause immediate failure of the dam.”

Subsequently, in the 18 months that passed between that inspection and the dam’s failure, EGLE neither required nor enacted any safety measures in the interest of public safety, and did not address any of the concerns that previous FERC inspections and communications had raised.

Another BridgeMI article from May 19 reported that “in court papers and federal records, regulators wrote that Boyce Hydro of Midland had a ‘history, going back to 2004’ of missing deadlines to make repairs on the Edenville Dam that failed. That long history of noncompliance ranges from failing to report structural instability to inadequate water quality monitoring — but Boyce Hydro’s failure, in particular, to increase the spillway capacity to address flood risk has raised serious concerns about public safety,” the Federal Energy Regulatory Commission wrote in a federal lawsuit over regulations in 2017.”