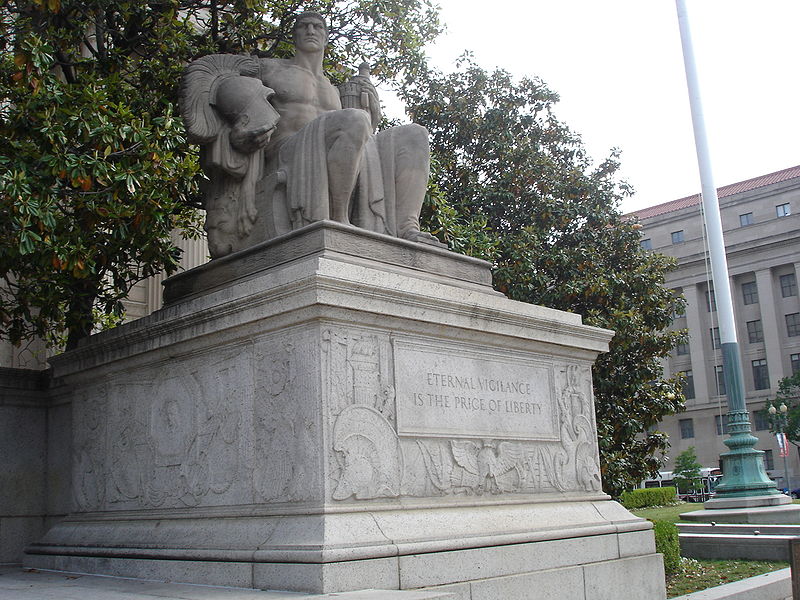 As you enter the National Archives in Washington, DC, repository of the Declaration of Independence, Constitution, and Bill of Rights, you will pass a statue on your right standing sentinel. Under the statue is the phrase: “Eternal vigilance is the price of liberty.”

Whoever said or didn’t say it,[1] as a burgeoning whippersnapper studying political theory at American University in DC, these words had a profound effect upon my understanding of citizenship.

Citizenship has always been hotly contested in this country. We see it most often in the debates about immigration. Perhaps you remember the unconstitutional[2] attempt a couple years ago to remove birthright citizenship. But citizenship has also been contested when it comes to the rights of women, Native Americans, and Black Americans, many of whom in the last group still face massive obstacles in terms of eligibility and ease of access to the polls. On one level the question of “Who gets to be a citizen?” is a story of slow progress. It must be said that we live in a profoundly different world from the one that the Founders inherited. But on a deeper level, this question is a perennial and cyclical struggle for our “new nation, conceived in liberty, and dedicated to the proposition that all men are created equal.”

But if the question of “Who gets to be a citizen?” is perennial, the question, “What does American citizenship mean?” rarely is asked. This is unfortunate because while the Framers had a tragically limited view of who could become a citizen compared to today, they had a radically expansive view of what it meant to be a citizen. This is a generation that had come out of the American Revolution: they knew that liberty cannot just be assumed. It has a cost.

These days, it is hard enough just to get people to vote. Turnout of eligible voters in American presidential elections has not hit the 60 percent mark in the last 50 years. Calls of “Don’t boo; vote” and the slightly more pugilistic “Vote or die”[3] are largely patriotic reimaginations of old men yelling at clouds.

But I hope that this column will always be a place where we can yell at clouds together. So let me say that the Bill of Rights shows that, to the Framers, citizenship meant much more than even voting.

In the first amendment, you will find free exercise of religion, freedom of speech, freedom of the press, freedom of assembly, and, in observance of Festivus, the right to petition the government for a redress of grievances. This might seem a bit like entering Lowry’s Books and More: a hodgepodge of stacks of rights gathered here and there, but actually they all have one thing in common: They were meant to protect spaces where politics happens 365 days per year.

Voting is something that happened every other year, but church, speech, publishing pamphlets and tracts (imagine whatever the 18th century version of Watershed Voice was), gathering for protests or to hear political speeches, and sending an angry letter to your representative: these were things you could and were expected to do all the time.

The sixth and seventh amendments, or the jury amendments, can be seen from two perspectives. One is that it’s nice to have a jury of your peers instead of an arbitrary judge deciding your case. The other side is that the enforcement of these rights is something that we the people are called to do. When life, limb, and freedom are on the line in criminal cases, or when merely more than $20 (the price of a 2020 KFC fill-up) are in dispute in a civil case, the Framers called for average, everyday citizens, our own peers to guard our freedoms.

It must be admitted that this has failed to serve justice many times, especially in the Jim Crow South. But I would argue that the vastly different view we have of the legal process today is not serving us well either.  We all know how much most of us try to get out of “having to serve on a jury.” The challenges to juries in our country run much deeper and darker than just our apathy, however. The other night, Nikki and I watched the excellent documentary The 13th (available now on Netflix), about mass incarnation. The movie gave the depressing statistic that in the United States, 97 percent of people in prison accepted plea-bargains, never to have their day in court.

In so many ways, we have refused to pay the price of liberty over the years: eternal vigilance. If we ever speak of the cost of freedom, it is almost always in the sense of our servicemen and -women serving abroad. They indeed pay the price overseas, but there is also a cost to be paid by the rest of us here at home, and so often we don’t exercise our rights. We have traded our first amendment responsibilities for electing a president every four years and imbuing him with messianic expectations that he will fix our problems for us. We have abdicated trial by jury by our peers for a complex system of lawyers, judges, and mandatory sentencing guidelines. I often hear people complain about the corrupt establishment, and it’s not entirely wrong, but it’s incomplete. We as citizens have active roles we can and must play: writing, speaking out, marching, in a word serving as citizens.

For all the “cloud-shouting” of my words above, I am not entirely unencouraged. The rekindling of the Black Lives Matter movement has presented a real opportunity to change the game of citizenship in this country. First, those marching are answering our two basic American questions: they are struggling for the question of “Who gets to be a citizen?” by embodying through speech, assembly, and press what it means to be a citizen. This is not a top-down effort, but everyday people taking a stand for equality and justice.

Beyond that, in this movement I see Generation Z picking up the baton. I am cautiously optimistic that this generation will be the one who finally returns to the truth that paying the price of liberty is up to us. As I write this on the anniversary of the third day of the battle of Gettysburg, I am still hopeful for “a new birth of freedom and that the government of the people, by the people, for the people, shall not perish from the earth.”

James E. Smith is a pastor serving at Trinity Episcopal and St. John’s Lutheran Churches. For comments, questions, or rebuttals, fire off an e-mail at jesmith7770@gmail.com. Prosit!