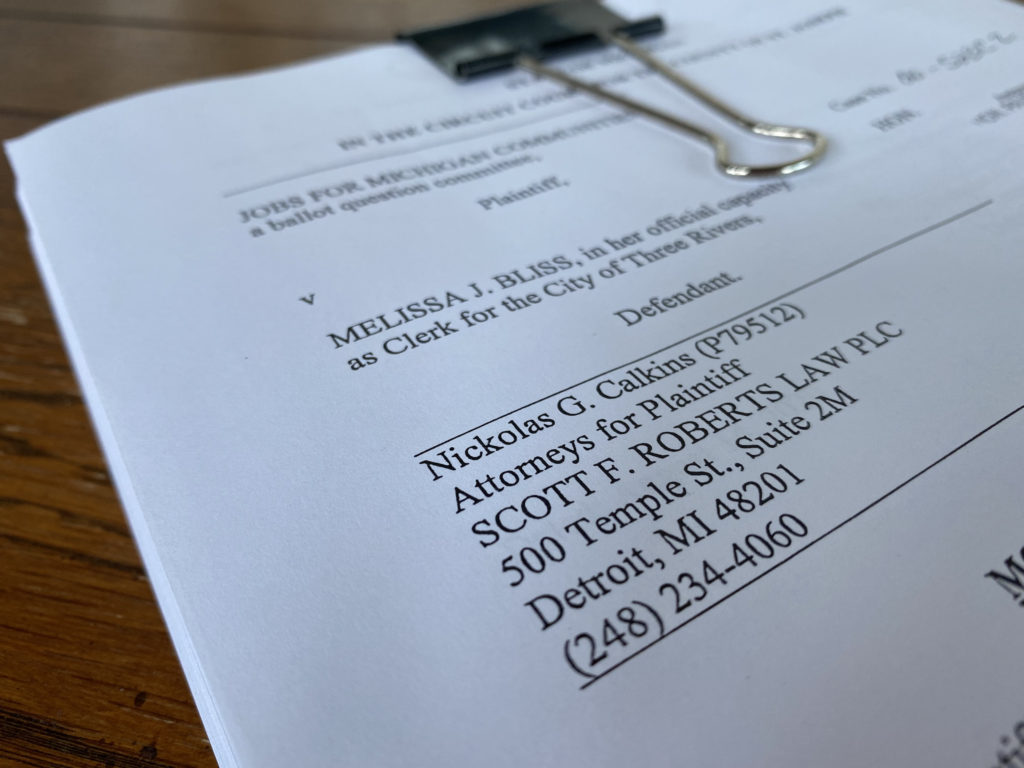 Alleging the denial of its “statutory right to initiate an ordinance relating to certain adult use marihuana establishments in the City of Three Rivers,” Jobs for Michigan Communities, a ballot question committee, filed suit Monday, August 17 in St. Joseph County Circuit Court against City Clerk Melissa Bliss and the City of Three Rivers.

The plaintiff is seeking a Writ of Mandamus compelling Bliss to canvass signatures submitted to her office, and if sufficient signatures were submitted, immediately certify the petition and cause the initiative to be presented on November’s ballot, as well as a declaratory judgment that states the petitions comply with the Michigan Regulation and Taxation of Marihuana Act (MRTMA).

On November 6, 2018, Michigan voters approved Proposal 1, which later became MRTMA, authorizing the recreational use of marijuana by adults over 21 years of age in the State of Michigan. MRTMA allows municipalities “to completely prohibit or limit the number of such businesses within their jurisdiction, and to adopt certain ordinances with regard to these establishments.”

In recent years the Three Rivers City Commission has voted to prohibit both medicinal and recreational marijuana businesses from operating within city limits. However, MRTMA does allow individuals to “petition to initiate an ordinance to provide for the number of marihuana establishments allowed within a municipality […]” MCL 333.27956(1), which is what the plaintiff was attempting to do when they filed said petition with the City of Three Rivers.

According to court documents obtained by Watershed Voice, Bliss sent a letter on Friday, August 7 to Andrew George, a representative of the plaintiff, notifying him the petition, which was submitted on Tuesday, July 28, was rejected on three separate grounds:

The plaintiff’s attorneys, Scott F. Roberts Law PLC, claim “These assertions are entirely without legal or factual merit, and such baseless legal assertions (do) not relieve (Bliss) of her clear legal duty to certify the initiative.” Attorney Nickolas G. Calkins of Scott F. Roberts Law PLC claims his client’s petition complied with relevant size requirements, contained legislative, not administrative provisions, and complies with the MRTMA, and even if the proposal did exceed the scope of the MRTMA, “That should not keep the proposal from the ballot.”

Calkins concludes the complaint by stating the following:

“In order to exercise its right to propose a local ordinance through the initiative process contained within the MRTMA, Plaintiff diligently circulated petitions in the City of Three Rivers and submitted a requisite number of valid signatures to have its proposal placed on the November 2020 general election ballot. Nevertheless, (Bliss) has refused to certify that proposal based upon legally untenable grounds. Plaintiff’s proposal either complied with MRTMA in that it provides for the number of marihuana establishments in the City of Three Rivers or, alternatively, that it complies with the plain language of the MRTMA, which allows such initiatives to encompass more than the mere number of establishments. Alternatively, even if Plaintiff”s proposal exceeds the scope of allowable activity under the MRTMA, (Bliss) was without legal authority to refuse to certify a petition based upon its content.

“For all of the reasons set for herein and in Plaintiff’s Complaint and Ex Parte Motion to Show Cause Why Mandamus Relief Should Not be Granted, Plaintiff had a clear legal right to have its petition certified, (Bliss) had a clear legal duty to certify Plaintiff’s petition, the actions required of (Bliss) are ministerial in nature, and Plaintiff has not other adequate remedy in law or equity. As such, this Court should grant Plaintiff’s requests for a writ of mandamus and declaratory relief.”