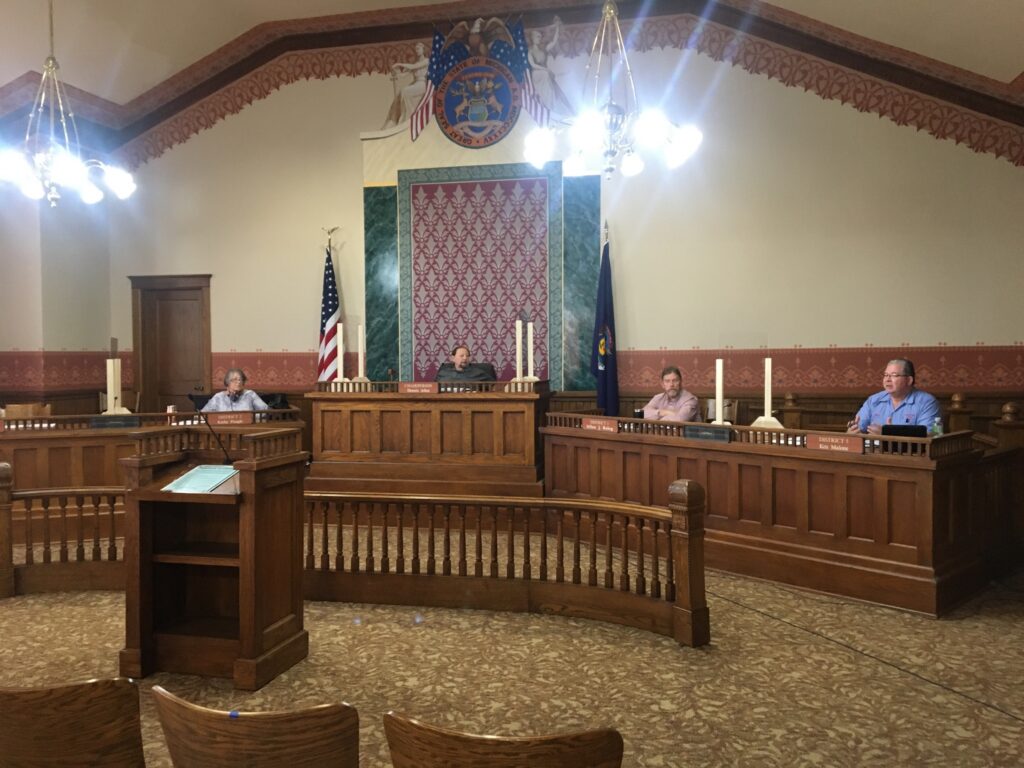 Following an Executive Committee meeting Tuesday, members of the St. Joseph County Board of Commissioners held their second workshop to plan the 2021 Fiscal Year budget. At the previous workshop, held two weeks prior, commissioners sought to address a significant potential shortfall, and directed County Administrator Teresa Doehring and Finance Director Angie Steinman to ask each of the county’s various department heads to submit their own savings proposals.

On Tuesday, Doehring said results were mixed from those department heads and not all have finished their calculations. The proposed 2021 savings from the department heads include a willingness by the Sheriff’s Department to temporarily hold off on filling two road patrol and two courts positions, some flexibility in elections spending from the County Clerk’s office, and a few other areas.

Between the proposed savings she has received, some projected income sources from taxes and fee increases, pending early retirements, and some other savings she and Steinman were able to consider, Doehring said the deficit for the working budget is down to about $360,000 from the approximately $990,000 figure presented two weeks ago.

Doehring said that kind of reduction is actually quite good, considering the number of variables at play and the lengths to which the county has already gone to make operations as lean as possible. She said she will not likely be able to calculate any further savings until she has a firm idea of how many and which employees plan to take advantage of an early retirement option, and which of those positions will or will not be filled. “We’ve scrimped and scraped, and this is where we stand,” Doehring said.

An unexpected surplus for 2020 that Steinman said is shaping up in the last months of the year also provides some flexibility if need be, although current and recent balanced budgets have come only through offsets from the delinquent tax fund, Steinman has said previously. Steinman said she expects to have a revised 2020 budget available for approval shortly to reflect the current status.

The proposed 2021 budget does include some capital requests. Among those are about $145,000 for upgrades to the courthouse’s servers and phone system, necessary to replace obsolete equipment and improve staff efficiency. Information Technology Director Dustin Bainbridge said most of the funding for that should come from grants, but those are still pending.

St. Joseph County Parks Director Jaymes MacDonald projects spending about $115,000 to perform critical structural repairs to the historic Rawson’s King Mill. However, he said he expects funding for that work to come from the parks’ own millages and other sources, including park fee revenues, which have been strong this year despite the pandemic. With $594,090 in revenues and 2020 leftover fund balances and surpluses, minus $214,800 in expenses projected for 2021, MacDonald expects a fund balance of $379,290 at the end of the coming year.

For the county’s general fund budget, next steps are for Doehring and Steinman to work up a final draft for review and approval at an upcoming public hearing, to be scheduled at one of this year’s remaining, regular County Commission meetings. That could happen as soon as next week.

Fee Structure Up for Renewals, Increases

During Tuesday’s Executive Committee session, Doehring reviewed proposed changes to the county’s use fee schedule with commissioners. A recent $55,000 study evaluated all of the county’s various fees and compared them to the cost of providing services. After reviewing the subsequent report with various department heads to analyze what increases could be feasibly borne by the public, Doehring provided commissioners with a draft, new schedule that she said, if adopted, “will pay for (the cost of the study) in the first year.”

Although some fees have not been updated in many years to reflect current costs, some are determined by law and therefore cannot be changed. Some others are limited below actual cost in order to keep necessary services affordable, Doehring said. In some cases, such as with animal control, fees are maintained at certain levels to encourage people to call in services when necessary. Despite those limitations, the new schedule could potentially bring in $150,000 in increased revenue according to Doehring’s most conservative estimates.

Designated Assessor up for Final Approval

A new state-mandated position is up for appointment at next week’s meeting. A 2018 change to Michigan law requires a majority of the townships in each county to approve a Designated Assessor, whose job would be to step in and take over local assessment duties in the event that a township does not meet its state assessment and reporting requirements over a two-year period.

Previously, in such cases, the state would appoint its own assessor to take over. From the point of takeover, the Designated Assessor would run a township’s assessment services for five years, after which time the township would be able to hire its own assessor again. That structure is basically the same, but the townships are now responsible for selecting the Designated Assessor with the county’s final approval.

A majority of townships in St. Joseph County have given their approval to Josh Simmons, who is the county’s Equalization Director. In the position, Simmons would not receive a retainer or any other form of regular pay but would be contracted to work a set rate at a township’s expense should the state mandate his services as Designated Assessor.

On Tuesday, Simmons said being called upon to serve in that capacity would not significantly impact his equalization duties, since he would largely be overseeing other staff of his own in carrying out his Designated Assessor role. Because he feels that most townships manage their assessment work sufficiently, Simmons said he considers it unlikely that he will be called upon.

Commissioners will vote on approval of an Interlocal Agreement that results in Simmons’ appointment to the position at next week’s regular meeting.

In other County Executive Committee business: