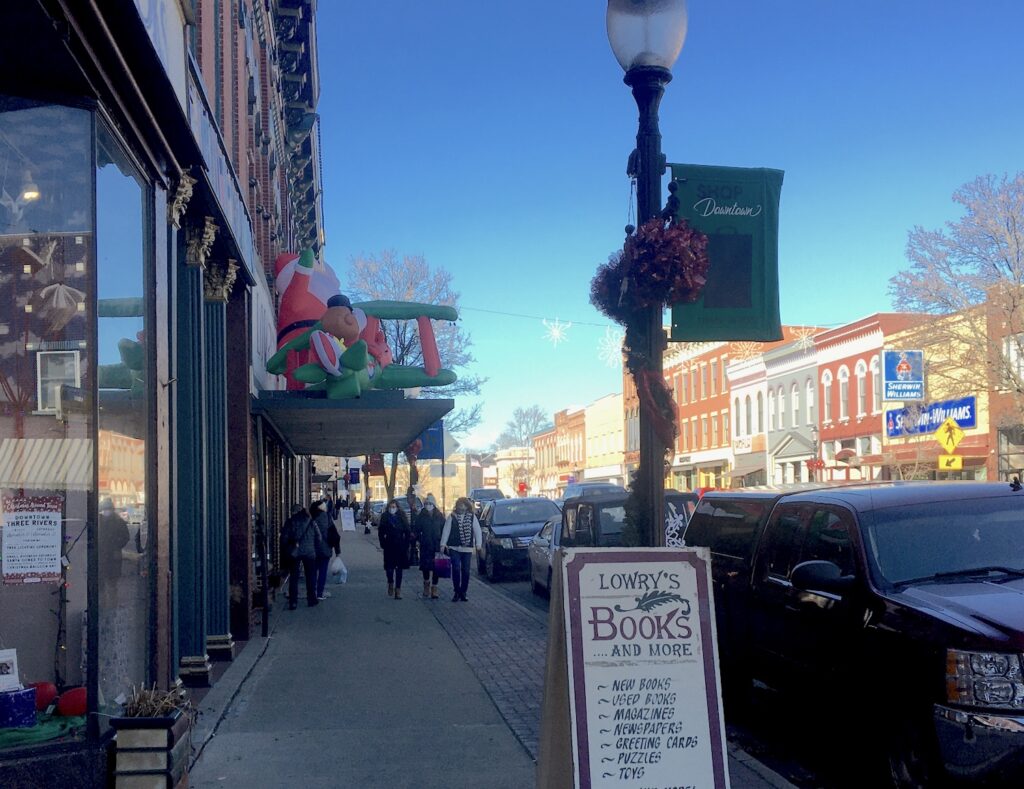 Visitors walk amongst the downtown shops in Three Rivers during Christmas Around Town and Small Business Saturday this past weekend. (Dave Vago|Watershed Voice)

Christmas Around Town (CAT), the annual holiday celebration in downtown Three Rivers, took place this past Friday and Saturday with a lighter schedule than normal. Restrictions issued by the Michigan Department of Health and Human Services (HHS) earlier this month meant curtailing a variety of things amid a pandemic spike. When HHS’s directive came out, CAT organizers further trimmed back an already curtailed event. However, there were still activities, and perhaps 200 people came out on Friday evening and Saturday to partake in them.

Each year, the Three Rivers Downtown Development Authority and Michigan Main Street Program (TRDDA) organizes CAT in cooperation with business owners for the weekend immediately after Thanksgiving. In a more typical year, the event features a full program. Crowds gather Friday night for the dedication and lighting of the downtown Christmas tree. Saturday includes Santa’s arrival downtown on a Three Rivers fire truck, followed by visits with children. There are often also carriage or wagon rides, hands-on craft activities, live reindeer, and other features.

Due to concerns around social distancing, CAT’s organizers already planned to replace direct visits with Santa with a more distanced activity in which they could see and interact with him from a distance. A letter station was to provide an opportunity for children to share their wishes. Wagon rides were to be limited in their capacity, and some other activities were cancelled altogether.

In their place, the Three Rivers Public Library offered to assemble a “storybook stroll,” wherein families could follow a story told in words and pictures in the downtown storefronts, accompanied by other holiday themed decorations. TRDDA Executive Director Tricia Meyer also said the annual “Small Business Saturday,” a national event meant to promote support of small businesses during the holiday shopping season, would also remain part of the event.

The Three Rivers Woman’s Club (TRWC) donated a large blue spruce tree, cut down from the home property of TRWC President Mary K. Todd. The tree had been planted by Todd’s children several decades ago when they were in grade school, having been brought home as a sapling on Arbor Day. When TRDDA volunteer Mary O’Connor mentioned the need for a tree during a downtown gardening volunteer day, Todd offered hers.

Staff from the Three Rivers Department of Public Services brought he tree to the downtown Mural Mall and placed it onsite. TRDDA volunteers decorated it. On Friday, Todd said she had spent the afternoon with family cutting down a tree of her own prior to the evening’s downtown tree lighting ceremony.

The downtown tree lighting ceremony traditionally features a reading of “The Night Before Christmas,” and for the last several years, Three Rivers Mayor Tom Lowry has done the reading. On Friday, Lowry wasn’t feeling well, so City Commissioner Clayton Lyczynski II volunteered to perform the reading instead.

Lyczynski is a member of the Three Rivers Community Players, and although he is used to something more rehearsed, he said he was nevertheless excited to have been a part of the ceremony. “I’m glad I got to do it and share it with the community,” Lyczynski said. “I could easily see myself being talked into doing the reading again.”

At the conclusion on Lyczynski’s reading, the tree lit after a short delay. Meyer said despite plans to have the tree light precisely when the last word is read, there is always a trick or problem that delays it. Others who have participated in the ceremony agreed that the ceremony is cursed with a bug where the tree always lights, but never lights on cue.

During the ceremony, about 20 people were in attendance in addition to Meyer, Todd, Lyczynski, and several volunteers. Meyer said she was “disappointed we couldn’t do the traditional ceremony with all the crowds and the carolers and hot cocoa, but all things considered, it’s still nice to take advantage of social media and have a way for people to watch it safely.” Following the lighting, Meyer thanked Lyczynski and Todd for their contributions, wished attendees and viewers well for the holiday season, and invited them downtown for Saturday’s activities.

Under the HHS restrictions and without Santa and the wagon rides, Saturday’s focus shifted to the storybook stroll and Small Business Saturday promotions. TRDDA volunteers added more holiday decorations to Main Street, and Meyer said the event would go on as an opportunity for the public to “come downtown, enjoy the decorations, support our local businesses, and be a part of the festivity of the holiday season.”

Over the weekend, Meyer and several business owners said they were happy members of the public were coming out to take advantage of that opportunity. Afterward, Meyer said she was pleased with the way the event turned out. “I think overall, it was a great day downtown. The weather stayed nice all day,” Meyer said. “I did go into most of the businesses and they were happy. I wouldn’t say they were as successful as in years past, but they were overall pleased.”

Stores observed occupancy limitations and masking rules, while still managing to enjoy steady visitor traffic. Meyer said she had to wait to get into several stores because they remained at their occupancy limits.

Ginny Wilson, who operates a Holiday Artisan Market each year from her storefront at 36 North Main Street, said traffic was a bit slow in the morning but “picked up nicely” by the early afternoon. “It’s great to have the downtown open again,” Wilson said.

Heather Martell, who hosted her own pop-up market at her real estate office at 4 North Main Street, said, “I’m surprised to see so many kids. More people have come in since it started than what I expected. I’m happy with the turnout.” Mary Salinas Hartzell, who sells lotions and perfumes and had a space at Martell’s, said in-person traffic was “a little slow,” but online traffic “has been awesome.”

Other stores also reported good traffic. Lowry’s Books and More had steady traffic, and at World Fare, volunteer and board member Julie Keefer said visitation was busy. “I’m actually surprised at the number of people going around, but it’s a positive thing to have this great, sunshiny day,” Keefer said. A lot of Saturday’s customers, Keefer said, were from out of town, which she said brought “positive energy” and a “festive atmosphere” to downtown during “this kind of dark and difficult time.”

Spirits were also high among attendees, Meyer said. “I was half expecting a little bit of frustration without having Santa or some of the other activities,” she said. “But they actually thanked me. A couple people thanked the TRDDA for still doing something.” Meyer said she is proud of the way she and the event’s volunteer planners were able to adapt. “We could have easily cancelled, but instead, we thought outside the box and tried to switch to something that would still provide an opportunity to come out.”

An appearance by Santa Claus and the wagon rides have not been cancelled entirely. Meyer said those features have merely been postponed pending further developments from HHS. The current restrictions expire at the end of December 8, and it remains to be seen whether the restrictions will be extended at that time. Since case numbers continue to climb, there is a chance of an extension.

However, if permissible after December 8, Meyer said TRDDA hopes to host Santa Claus and the wagon rides on Saturday, December 19. Members of the public should watch the Downtown Three Rivers Facebook page for the latest developments, and Watershed Voice will provide an update if and when one becomes available.