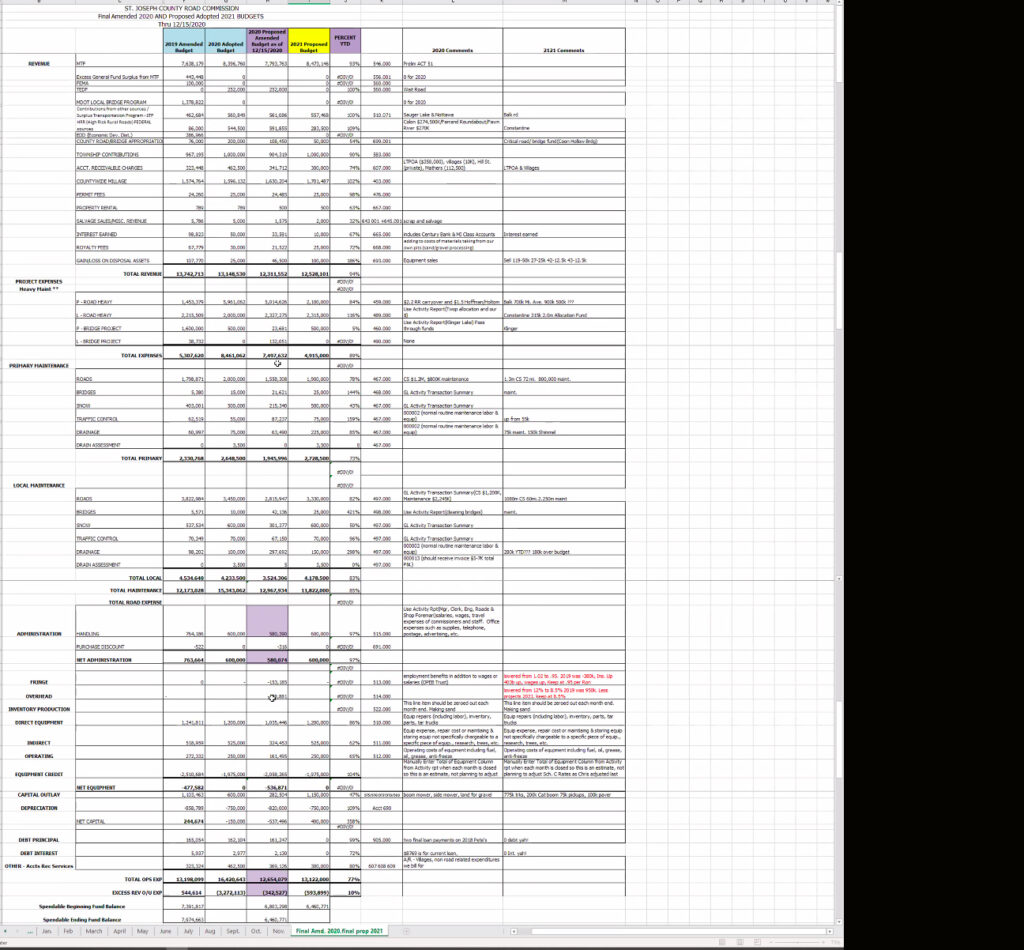 The St. Joseph County Road Commission (SJCRC) approved its 2021 Fiscal Year budget at a work session Wednesday. Managing Director John Lindsey presented a draft budget to commissioners on December 2 for review and any updates and corrections. Since that meeting, figures were added to reflect additional revenues for the current budget year, but adjustments to the 2021 figures were minor. As passed, the 2021 budget includes a rough total of $12.5 million in projected revenues and $13.1 million in projected expenses.

The difference of just under $594,000 will come from the agency’s fund balance. Lindsey expects that balance to stand at slightly over $6.4 million for the new year, but that includes around $1.1 million worth of inventory. Available, spendable funds will equate to just under $5.4 million once that subtraction takes place.

Regardless, the fund balance figure is well in excess of what is typical for best practice considerations among public agencies. Having 15 percent of the annual budget on hand as fund balance surplus is a recommended minimum, and many agencies aim for 20 percent. That would equate of roughly $2.3 to $2.4 million. Earlier in December, Lindsey said he prefers not to go below 25 percent.

A number of factors have affected revenues and spending in 2020, some of them related to the ongoing COVID-19 pandemic. In accordance with those changes, commissioners also approved an amended budget for 2020 to better reflect conditions as they played out this year.

As originally adopted, the 2020 budget included about $13.1 million in revenues and $16.4 million in expenses. Actual revenues are projected to finish the year at $12.3 million, partly due to reduced gasoline spending at the peak of the pandemic shutdown in the spring. The expenditures figure will fall at about $12.65 million unless a major snowfall requires holiday pay or overtime on the part of crewmembers before the end of the year.

Some related factors will also affect revenues and spending for 2021. For revenues, the St. Joseph County Commission last month approved a reduction in its allotment to the Critical Road and Bridge Fund, dropping from $200,000 to $50,000. Some federal funds sources will either be reduced, or not provided this year. Some revenues are also simply being planned conservatively. Others will even see likely improvement, such as Michigan Transportation Fund revenues that were affected this year by the pandemic.

Under expenditures, major projects are planned for Balk Road and Constantine Road. Total project expenses are projected at about $4.9 million. Adding to that figure roughly $2.7 million for primary road maintenance and just under $4.2 million for local roads, total anticipated road maintenance will come in at around $11.8 million. Capital outlays of $1.15 million will include purchase of a previously approved boom mower for roadside brush trimming, and 2021 is also a scheduled year for the purchase of new trucks. $600,000 is budgeted for administrative costs.

A culvert slated for replacement on Klinger Lake Road will be a 2021 project, and commissioners approved a $413,349.68 bid for that work from Hoffman Brothers at Wednesday’s work session. Because that project involves lengthening the culvert, it will qualify under pertinent definitions as a bridge once the replacement takes place, which will make future improvements eligible for bridge funds from outside sources.

Attendance at Wednesday’s work session was the last function for SJCRC member John Bippus, whose last day on the commission will be December 31. Bippus has served on the commission for about a decade, having begun his appointment in March 2010. Last month, the St. Joseph County Commission voted not to reappoint John Bippus to the SJCRC. In making the decision, some county commissioners alluded to unspecified controversy involving Bippus. Jack Coleman will fill the open seat on January 1.

At Wednesday’s work session and at the SJCRC board meeting earlier this month, road commissioners and staff spoke positively of the work Bippus performed during his tenure with the agency. Director of Administration Julie Mayieurs called Bippus “a tremendous role model to this entire county.” Board member Rodney Chupp praised Bippus for his willingness to serve his community and for his courage to “make decisions that he believes are right and stand by them.”

In previous comments earlier in December, Lindsey said Bippus was responsible for significant changes to the way SJCRC operates, and that those changes produced significant improvements in efficiency, cost reductions, and ability to complete greater volumes of work each year. Changes under Bippus’ influence have included a leaner fleet, workforce, and buildings infrastructure, Lindsey said.

SJCRC Vice Chair Eric Shafer gave a detailed presentation on Bippus’s service on Wednesday. In preparation, Shafer asked SJCRC staff to compile information on Bippus’s accomplishments. “John’s leadership has led to some real improvements,” Shafer said. The challenge at the start of his tenure, Shafer said of Bippus, was to address deteriorating roads, rising construction costs, and falling revenues.

Shafer said Bippus advocated for a variety of changes. The results of those changes were dramatic. In 2010, Shafer said, SJCRC treated 54.73 miles of road with chip seal, a protective surface application, at a total cost of $916,000. In 2020, the agency treated 176.62 miles at a cost of $8.449 million, representing a 323 percent mileage increase.

This was made possible, Shafer said, by a reduction in workforce from 42.5 to 33 employees, a reduction in equipment and associated expenses, elimination of dilapidated buildings, and some departmental consolidations. Bippus also advocated to increase the board’s size from three members to five, making it easier to ensure quorum and compliance with Open Meeting Act requirements.

Significantly, Shafer said, Bippus advocated to lower townships’ required contributions to work work on local roads from 80 to 50 percent. As a result, the number of townships participating in SJCRC shared projects increased from two to 16, and the match those townships provided increased from $121,743 to $973,575 from 2010 to 2020.

Bippus provided other guidance and technical advice to board members and staff, Shafer said. On Wednesday, SJCRC Chair Dave Allen praised the leadership and mentorship Bippus provided when he and Shafer joined the commission’s board, calling it “invaluable and appreciated.” Allen said, “the modern road commission is due largely to John’s influence.” Allen said Bippus drove “some tough decisions along the way,” but said those decisions enabled the agency “to have more dollars available at our disposal to maintain and improve more miles of road.”

Bippus offered his own parting comments. “I always tell people this is the best board I’ve ever served on,” he said. “Not to disparage the others, but this board gets it done.” Bippus said the SJCRC has undertaken “a lot of courageous action,” and is populated by “a lot of doers.” Bippus said he is sure the county has made a “good pick” in Coleman. He said SJCRC is a “well-run organization, and a great board. Thank you everyone for all your comments, and for the last ten years.”

Assistant Manager and Engineer Garrett Myland said MDOT has approved grant funds to replace four railroad crossings on the Grand Elk Railroad. The work will occur at no expense to SJCRC, which was required to serve as the applicant for the funds. The railroad will pay for the work, and MDOT will reimburse the railroad for grant-funded portions, equating to 60 percent of the project total. Crossings scheduled for replacement include those on Fairchild, Featherstone, Moorepark, and Cotherman Lake Roads.

The grant award caps a series of accomplishments this year that include a number of project grant awards and a record volume of road repair and construction work including paving, chip sealing, repairs, and infrastructure replacements. In his remarks near the end of Wednesday’s work session, Allen offered “a huge thank you to the staff for an epic, historic year for the Road Commission.”