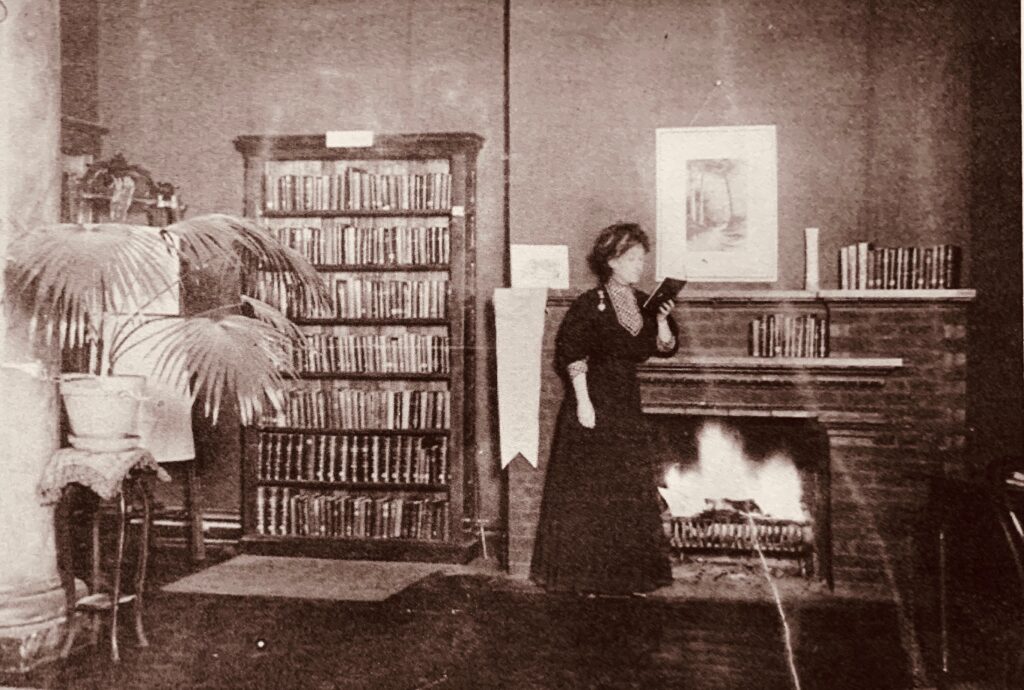 Former Three Rivers Woman's Club member and librarian Sue Silliman poses for a photo near the fireplace at the Three Rivers Public Library in 1905. (Photo provided)

Twice this past month the sound of glass crunching underfoot could be heard in our Capitol, Washington, DC, first on January 6 and then on January 20. The first breaking glass was a mob breaking into the Capitol Building to force Congress to reject the certified Electoral College vote for a new President and Vice President. The second sound was metaphorical, the swearing in of the first woman to be elected Vice President of the United States of America.

Today, building on that second event, I want to tell you the story of the Three Rivers women who are a part of the history leading to the country’s acceptance of the idea that a woman’s place is not just in the home but in all endeavors they choose to undertake.

One hundred and thirty years ago 14 women from Three Rivers accepted a request from the organizing committee of the World’s Columbian Exposition, known to many as the Chicago World’s Fair, to learn more about the Spanish queen, Isabella, who backed Columbus’ search for a new route to India. As we all were taught, he instead sailed into what was a new world for Europeans but not for the people who already lived in what came to be called the Americas.

These women founded an Isabella Club in 1891 and, in 1893 after the World’s Fair ended, renamed themselves the Woman’s Club of Three Rivers. In the years since they have continued their dedication to learning and civic involvement. As the oldest service organization in Three Rivers, Three Rivers Woman’s Club has grown not only in numbers over the years but in their involvement in projects to improve the lives of neighbors and fellow citizens.

In tune with their belief in education and knowledge, one of the first projects was to support the building of a public library with funds from Andrew Carnegie and the community. The Three Rivers Public Library opened in 1905 with Sue Silliman as the first Librarian. Almost one hundred years later they spearheaded the community effort to save the Carnegie Library Building from demolition.

In the years in between, they organized and/or supported numerous projects. Among them are:

In 1979 Woman’s Club members voted to use their money — funds they had been accumulating since the 1920s — to build their own clubhouse, to rescue and restore the Carnegie Library Building and establish a community center. In 1980 the Club established the Carnegie Center for the Arts.

But there is so much more! The current History Committee of the Woman’s Club is organizing the many documents from 1891 on and planning to publish articles on the achievements of the Club based on historical information we are discovering. This article is the first of what we plan as a yearlong series of articles leading up to the celebration of the 130th anniversary of the Three Rivers Woman’s Club in November 2021. (In subsequent articles, the names of the women from the early years will be familiar to you as local landmarks.)

We hope you enjoy these glimpses of the past and the role of women in furthering the general wellbeing of the Three Rivers area. We welcome your feedback! And we welcome any information you can add to the history of the Three Rivers Woman’s Club. You can reach us the TRWC History Committee via email at trwchistorycommittee21@yahoo.com.

Helen McCauslin is a member of the Three Rivers Woman’s Club, History Committee.