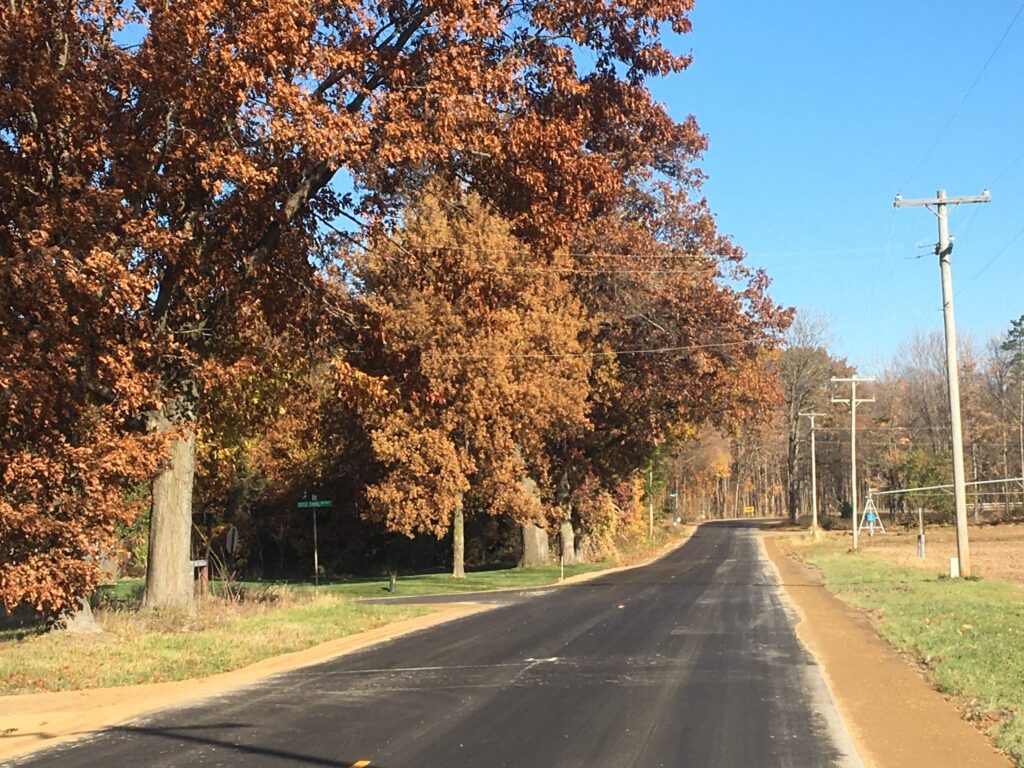 SJCRC Managing Director John Lindsey said Myland deserved the award for his hard work on a variety of projects. Myland recently led SJCRC’s efforts to improve the balance of materials used in a process called “chip sealing,” a road surface treatment involving tiny pebbles and asphalt emulsion designed to prolong the surface of the pavement. Over most of last year’s warm season, Myland and SJCRC staff conducted experiments to determine which materials worked best in what proportions.

In addition, Myland has written several successful grant applications, and continues to write more. Owing to grants Myland has helped secure, SJCRC has become potentially eligible for further funds over the next several years that could enable the agency to pursue projects like the rehabilitation of the Langley Covered Bridge or the addition of wider shoulders to Lutz Road. Both of those projects will depend on other monies coming forth in order to proceed, but he and Lindsey said they believe the money and work they have already attained will make that easier in future grant cycles and with other funding sources.

Several SJCRC board members commended Myland for his receipt of the award, which includes a large plaque, according to Lindsey. Jack Coleman, who joined the SJCRC board at the beginning of this year, found the award significant enough to reach out to Watershed Voice Friday to ensure reporters knew of Myland’s achievement.

In his staff report Wednesday, Lindsey said he was pleased with the way SJCRC crews handled the removal of snow on Tuesday following an overnight storm. Under mild to moderate conditions, Lindsey said a typical snow route is “set up to be done in eight hours.” Lindsey said there are 24 plow routes and 23 drivers qualified to plow those routes. With the volume of snow that fell overnight, Lindsey said it took 10 hours to clear all of the plow routes.

Florence Township Supervisor Tim Carls, who was in attendance at Wednesday’s meeting, was more critical, offering the opinion that SJCRC was spending more on snow removal than Lindsey let on. With the number of drivers on snow removal duty Lindsey discussed, the bill for person-hours, as well as fuel and other expenses, can come in at several hundred thousand dollars for a single snow event. Carls said SJCRC spent “millions” on the task of plowing snow, although he was not specific about the source of that allegation. Carls also suggested SJCRC could “have one truck plowing Class A roads all night” to ensure emergency routes are passable.

SCJRC Chairman David Allen said he took “exception to the insinuation of intentional wrongdoing. Absolutely not.” Allen said there are things the SJCRC board and staff could do better, and that both work consistently to try to do better. “We have a commitment to do better tomorrow than we did yesterday,” Allen said. “We try to do the best with the money we have, and I think we do a good job with that.”

Also on Wednesday, board members approved a proposed road closure and abandonment discussed at several recent meetings. A section of Haybridge Road that runs eastward from Sevison Road and ends at a condemned bridge over the Fawn River will revert to adjacent property owners in accordance with usual practice regarding roads built on a right-of-way over private property. The property owners have agreed to take responsibility for removing the condemned bridge, which has been closed for 15 years.

In 2004, after and determining the bridge needed significant work to remain in operation, SJCRC staff and board who were in place at the time sought and were awarded funding to replace the bridge. The existing bridge design was no longer in compliance with current flood management regulations, and since the work required complete replacement, the new bridge would have had to follow an entirely new design.

That design necessitated a 100-foot span between abutments, significantly longer than the existing bridge, and a new alignment following a different angle. This, in turn, would have called for relocation of the roadway approaches on either side. When it appeared as if the relocated roadway would sacrifice some of the adjacent landowner’s farmland in favor of wetland on the other side, the landowner declined to grant permission to move the right-of-way. SJCRC did not pursue eminent domain. The replacement work did not take place, and the awarded funds were returned.

In a final inspection in 2008, the bridge was condemned. Then, in 2014, the Federal Highway Administration notified SJCRC that because the bridge had been out of service for more than five years by then, it was no longer eligible for Critical Bridge Funding, an important tool for funding the kind of work the bridge required. Loss of the designation was permanent, meaning that replacement of the bridge would function from a financial and regulatory standpoint as if an entirely new road were being built.

Nearby bridges on Dickinson and Sevison Roads still permit motorists to cross Fawn River, and properties abutting the section in question all have other access points. Traffic on the section of road is limited to recreational users accessing a St. Joseph County Parks and Recreation (P&R) canoe and kayak launch next to the closed bridge, and to people who use the road to access the riverbank for illegal parties, bonfires, and camping.

The section in question lies in Florence Township, and at SJCRC’s February 3 meeting, Carls requested a chance to permit the township board time to vote on whether it would assume operation of the road section, which it is entitled to do by law in the course of an abandonment procedure. This Wednesday, Carls was present again, and said the township voted not to assume control of the road.

However, Carls nevertheless voiced opposition to the abandonment. Carls called the SJCRC board “negligent” for permitting the bridge to fall out of use. Neither Lindsey nor Myland was employed by SJCRC at the time the bridge was condemned and removed from funds eligibility. Nor were any of the current members of the SJCRC, a fact which Allen pointed out to Carls. Vice Chair Eric Shafer said with “97 other bridges” under SJCRC control, “none of us would vote to spend a million dollars on this bridge.”

Board member Vince Mifsud joined Carls in opposing the abandonment. “It’s not like a pickup truck,” Mifsud said. “It’s not like you can get rid of it and then turn around and buy a new one,” due to the fact that the right-of-way will revert to private ownership. Mifsud cast the sole opposing vote during Wednesday’s approval. Board member Rodney Chupp was previously opposed to the abandonment, but said Wednesday his concerns had been addressed. Allen abstained from voting due to a professional relationship with the adjacent property owner through his employer, Midwest Energy.

Another section of Haybridge Road immediately across Fawn River will remain open. That section continues from the river’s edge past a connection with Block Road and ends at Engle Road. Lindsey said St. Joseph County Parks and Recreation will relocate a canoe launch that currently exists on the side of the river adjacent to the section to be abandoned.

Of the abandonment, Coleman said the road has “been there a long time. No one noticed it hasn’t been used” until the property owner filed his petition for abandonment last fall. “We can’t predict the future, but we have a right of way to use, and we’re not using it,” Coleman said.