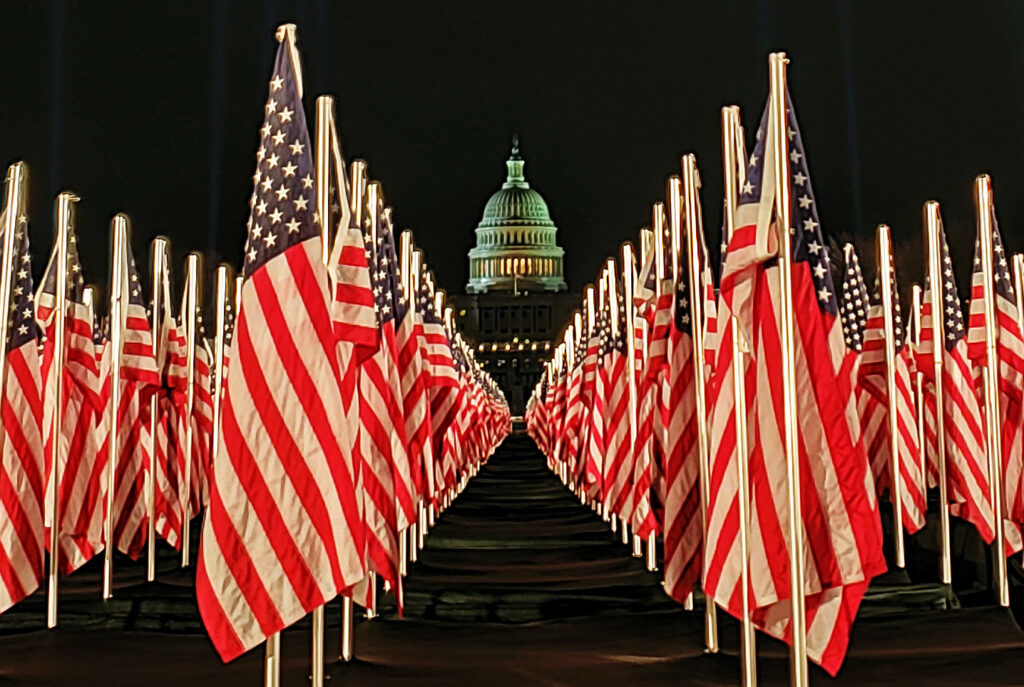 The U.S. Capitol is centered among the "Field of Flags" at night during the 59th Presidential Inauguration in Washingtion, D.C. The Field of Flags represents the victims of COVID-19. (CBP via Flickr Public Domain)

The U.S. House on a nearly party-line vote passed President Joe Biden’s $1.9 trillion pandemic aid package early Saturday, in a rush to both boost COVID-19 vaccine funding and get legislation to the president’s desk before unemployment benefits expire in mid-March.

The package, dubbed the American Rescue Plan, passed 219-212. It includes a gradual increase in the federal minimum wage to $15 an hour, despite a ruling on Thursday by the Senate parliamentarian that the wage hike does not comply with Senate budget rules. Whether the pay increase survives in the Senate is yet to be seen.

In Michigan, the seven Democrats in the delegation voted yes and all seven Republicans voted no.

“I am glad we are a step closer to providing needed relief to people across the country who are still being deeply impacted by this ongoing pandemic. The American Rescue Plan Act passed out of the House has critical provisions and programs that will help residents survive the health and economic crises that have been brought on and exacerbated by the COVID-19 global health crisis,” said U.S. Rep. Rashida Tlaib (D-Detroit). “The path to providing that relief is far from over though, and we have to keep pushing every day to get checks in people’s hands. We need members of the Senate, Senate Majority Leader Schumer, and Vice President Kamala Harris, in her role as the president of the Senate, to make sure provisions like the $15 minimum wage increase remain in this relief package. Our people cannot wait any longer for this long overdue raise.”

“I hope the Senate is able to adopt a number of legislative amendments that were denied from being offered in the House to address the non-COVID spending issues in this bill,” he said. “We need a targeted, bipartisan relief package that helps the Americans struggling most without just throwing more money at the problem. This legislation can be improved and we can do more to help the American people by working together.”

Two House Democrats voted against the bill — Reps. Jared Golden of Maine and Kurt Schrader of Oregon. Every Republican opposed it.

“We need to pass this bill prior to March 14 so that some millions of people are not falling through the cracks,” House Majority Leader Steny Hoyer (D-Md.) said at a press conference. “Today’s vote is a crucial step in our fight to defeat COVID-19 and build our economy back better.”

The Biden administration on Friday underlined its support for the massive measure, which includes $350 billion in direct aid to state and local governments.

“The bill would allow the Administration to execute its plan to change the course of the COVID- 19 pandemic,” the administration said in a statement. “And it would provide Americans and their communities an economic bridge through the crisis.”

The bill would provide direct checks of $1,400 to Americans in certain income brackets, extend unemployment benefits and food programs and continue pauses on rental evictions.

More than half-a-million Americans have died of coronavirus with nearly 26 million positive cases.

On the House floor, Rep. Steve Scalise, (R-La.), objected to the bill, arguing that $350 billion should not go toward state and local government to “bail out failed states.” Louisiana is set to receive $5 billion overall.

“We should be here tonight focused on real priorities,” he said, arguing for more of the funding to go toward reopening schools and vaccine distribution.

The bill provides $7.5 billion for vaccine distribution, rollout and planning, along with $1 billion set aside for the Centers for Disease Control and Prevention to carry out activities to “strengthen vaccine confidence.”

White House Press Secretary Jen Psaki said in a statement that the president was disappointed that the parliamentarian ruled that the proposed increase to the minimum wage could not be included in the relief package.

The measure is being considered under a process known as budget reconciliation, which allows for floor passage with a simple majority—crucial for Democrats who control a Senate split 50-50 with tie-breaking votes cast by Vice President Kamala Harris.

“He will work with leaders in Congress to determine the best path forward because no one in this country should work full time and live in poverty,” Psaki said.

Ahead of the vote, House Speaker Nancy Pelosi, (D-Calif.), said that Democrats would still include the federal minimum wage increase in their relief package because they believe it’s necessary.

“We are sending it as a symbol of a difference it will make in the lives of the American people,” she said. “If it doesn’t prevail because of Senate rules we will persist.”

Senate Democrats are already looking to work around the parliamentarian’s decision by imposing a 5% tax penalty on a “big corporation’s total payroll if any workers earn less than a certain amount,” Senate Finance Committee Chair Ron Wyden, (D-Ore.), said in a statement.

“It also would include safeguards to prevent companies from trying to outsource labor to avoid paying living wages,” he said.

Sen. Josh Hawley, a Missouri Republican, also said he plans legislation that would require billion-dollar companies to pay their employees a minimum wage of $15.

The sprawling House bill provides a temporary extension of the Child Tax Credit from $2,000 to as much as $3,600 for the youngest children over the next year.

To help educators and school staff deal with the mental health of students, the bill allocates $80 million to address burnout, suicide and mental and behavioral problems.

Additionally, the bill would put $20 million toward a public health campaign aimed at encouraging health care workers to seek support and treatment for their own mental health.

States and local governments would be in line for the following funding under the House version of the bill, according to the House Oversight and Reform Committee: