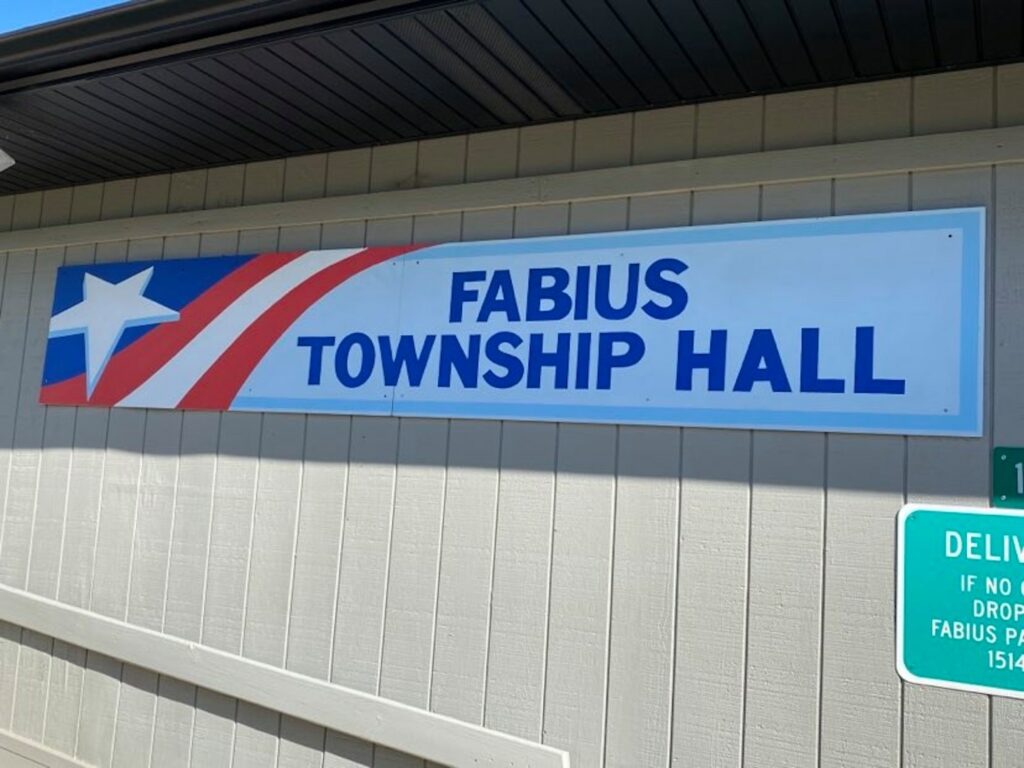 When the postcard showed up in her mailbox two months ago, Joy Rockwell was taken aback.

“She had no knowledge this was taking place until she received a postcard in the mail,” Paul Gamby, Rockwell’s partner, told Watershed Voice.

That postcard informed Rockwell that a Fabius Township solar farm was in the early stages of development and that farmland directly behind Rockwell’s five-acre homestead on Harder Road was going to be a part of it.

Gamby said after receiving the postcard, Rockwell became worried about how the development might affect her quality of life and, more importantly, the value of her home. Rockwell was so worried about her property values that she contacted a local realtor for a consultation. Rockwell, who runs an accounting business from her home, “likes the view and doesn’t want it blighted with solar panels,” according to Gamby. He said Rockwell also has concerns about how glare from the panels might shine into her home if the panels rotate to follow the sun.

Frustrated, Gamby and Rockwell started a petition drive to raise awareness about the development. He also started a Facebook group called “Fabius Solar Facts” to help people “do their own research” about how the project will impact the area.

“There are better places for this,” Gamby said, adding he feels the development is “not a very environmentally friendly project” because it is “close to wetlands,” and that it will be built on acreage currently used to grow corn and soybeans.

The proposed solar farm that has Gamby and others up in arms is called the Fabius Solar Farm, a project of the California-based Orion Renewable Energy Group. According to their website, Orion has developed dozens of wind and solar farms across the U.S., but the Fabius development would be their first project in Michigan.

Amanda Hoffman is a Project Development Manager for the Orion Renewable Energy Group and is leading the local development. She wasn’t surprised by the controversy when contacted by Watershed Voice for comment.

Hoffman said the Fabius solar farm is still in the “very preliminary” stages of development but would use approximately 1,500 acres of land in Fabius Township and that 15 local farmers have already signed up to lease their land for that purpose. While not all of that acreage will be covered with solar panels, Hoffman said the farm is expected to generate approximately 150 megawatts of power when it starts to generate energy sometime in 2023 or 2024.

Hoffman explained that the proposed solar farm should generate over $13 million in additional tax income for the area and that nearly $4 million of that will go directly to Three Rivers public schools.

“A lot of landowners are very supportive,” Hoffman added, explaining that many local landowners were excited to lease their farmland to generate clean renewable energy. These solar farm supporters have developed a rival Facebook page to Gamby’s called “Citizens for Fabius Solar” to advocate for the planned development and to encourage local residents to support it.

A review of recent news stories reveals the Fabius development isn’t the first time an Orion solar farm has caused controversy. Just last month a proposed Orion development in North Carolina was not approved by a planning board after local opposition. The North Carolina project raised the same kind of concerns Fabius’ is raising, apprehension about property values, concerns about how the development will look, and how it may affect the lifestyles of those who live nearby. In North Carolina, those concerns proved fatal for that project but what will happen here? Do the Fabius Township project’s benefits outweigh the costs?

Hoffman believes the Three Rivers area will be better off with the project, and said the concerns expressed by Gamby and others are based more in fear than in facts.

“Independent studies of installed large-scale solar energy projects,” Hoffman wrote in an email to Watershed Voice, “[…] consistently show that operating solar farms have no material impact on neighboring property values.” She also denied the farm would contribute to soil erosion or create glare.

“Solar panels are made of materials that are meant to absorb sunlight, not reflect it.” Hoffman added that Orion will be submitting a glint and glare study as part of their upcoming permit application.

While the development of renewable energy sources like the proposed solar farm can help slow the progression of global warming by reducing our reliance on polluting fossil fuels, residents like Gamby and Rockwell worry about the personal price they may have to pay for this progress.

The largest financial asset that most Americans have is their home and home ownership is often the foundation of family wealth. The value of one’s home can be leveraged to pay for a child’s college education or to fund the owners’ retirement. Residents like Gamby and Rockwell worry that even a 10 percent reduction in the value of their homes could impact them and their children for years to come.

Soon when the application for the project is submitted, Fabius Township residents will have the opportunity to voice their opinion about the project and to advocate for its development or its cancelation.