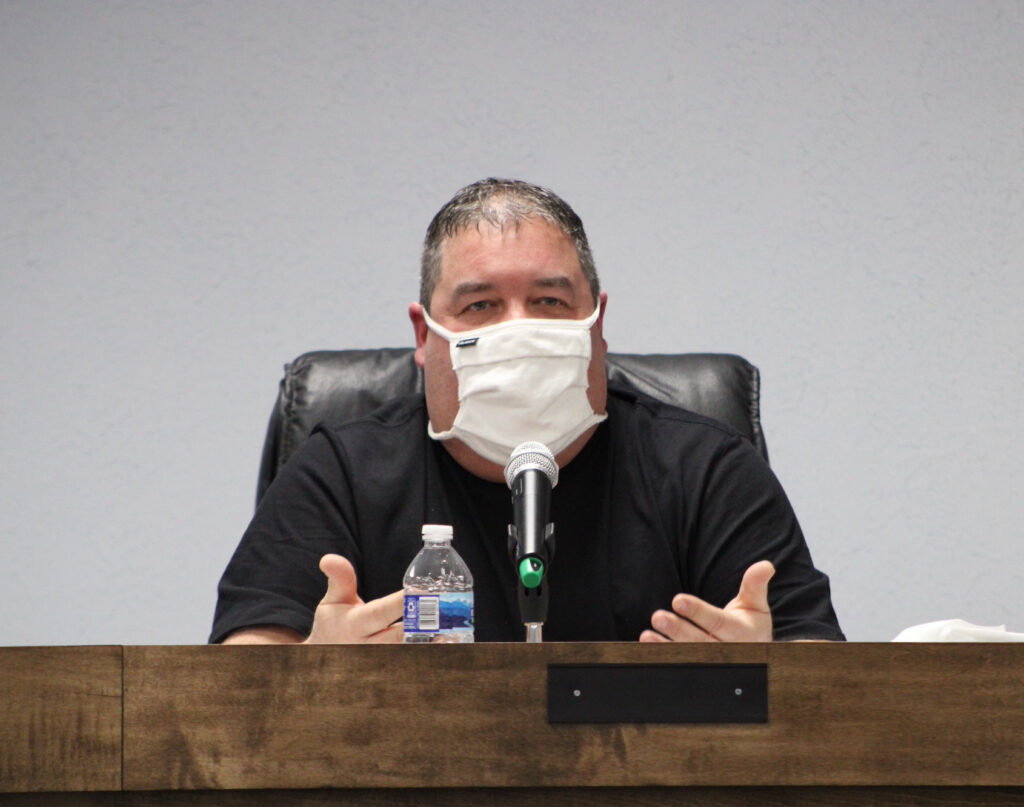 During a contentious Fabius Township Planning Commission meeting Tuesday, Commissioner Dan Wilkins addressed concerns over the way the solar farm ordinance was written, who helped write it, and the perceived lack of transparency on the part of the township. In the early stages of the ordinance’s composition Orion Renewable Energy Group reached out to a Fabius Township official concerning solar farms within the township, and Orion, who is hoping to build multiple solar farms in the area, assisted the township with ordinance language including stipulations concerning decommission fees at the request of the aforementioned official. Several members of the public Tuesday cited Orion’s involvement as a conflict of interest considering Orion could theoretically stand to benefit from said ordinance, and therefore should not have been involved in the process.

“Probably what concerns me even more than working with somebody that is in that business is that it was not transparent,” Wilkins said Tuesday. “What I mean by that is I went through the minutes for the planning commission and (Orion) is never mentioned by name, and matter of fact, solar farm or solar farm company is never mentioned by name. So if you were following that by the minutes, you would not know. A couple of times it’s mentioned as ‘an interested party’ but that’s it. So it does cast a shadow, I don’t like it, and I was on the township board at the time, and when that (solar) ordinance came to us for final approval I know for a fact that we were not told there was a company involved, and that’s not right either.”

Wilkins recommended the township board pursue “two avenues to straighten this out.” He suggested submitting the ordinance to the county planning commission and Southcentral Michigan Planning Commission for review, which the township board agreed to do during Wednesday’s meeting.

Approximately a half dozen concerned citizens spoke at Tuesday’s planning commission, almost all of which spoke against the ordinance and the presence of solar farms in their community, including Chuck Taylor who owns land next to proposed solar farm locations. Taylor asked why Fabius Township officials were asking “the beneficiary of an ordinance to write an ordinance?” and questioned who other than the solar company and the farmers renting their land to that company would benefit from solar farms.

“I bought a 40 acre farm, as it looks like on their plan that I’ve seen since we were able to get them from the zoning, it looks like I’m three quarters surrounded right now (by solar farms),” Taylor said.

“[…] I feel fully surrounded, I bought it to build a farm, a small farm and a house for my family — I’d rather just go, you know, quite frankly — I may just end up selling my spot and moving away. I don’t want to be in the middle of an industrial solar farm because it’s an industrial complex, and I just don’t see where your residents are benefitting from this. Maybe some people in Chicago or Detroit or Grand Rapids or Indianapolis might get some power and I understand that but it’s affecting me in a form of like being railroaded. If you’ve read anything about the railroads in the 1870s, they just came through, paid you their price and moved on. These guys are offering to rent, and I get that, but it is pressure, it’s either sign it or you won’t get in and that’s pressure, no matter what.”

Outside of representatives from Orion, no one in favor of solar farms spoke publicly at Tuesday’s meeting but Lisa Rockwell, whose father Terry Rockwell owns property in Fabius Township, some of which is part of the proposed Orion solar project, wrote a letter to the planning commission calling the project a “win win for the community,” citing the potential revenue the county and local schools could receive as a result of those farms being built.

Rockwell said farmers take “a risk every season, every year, year after year,” putting labor and money into land they hope will allow them to “produce an income that will allow them to support their families, provide to the community, and provide the necessary items to live, not just the ‘wants’ in life.”

“The farmers that are participating in the project are looking at acreage that is not part of speciality crop farming where the income is lucrative, but at acreage where yields are not favorable and terrain limits other crop farming or soil conditions are not ideal, which is good management on their part,” Rockwell wrote.

“[…] The township has ordinances in place to allow the solar projects. The landowners made the investment in purchasing their land, the ordinances are in place for allowing them to use the land as the ordinances allow. You would not want them to step in and tell you what to plant in your garden or what type of aggregate to use on your driveway. Let due process take its course.”