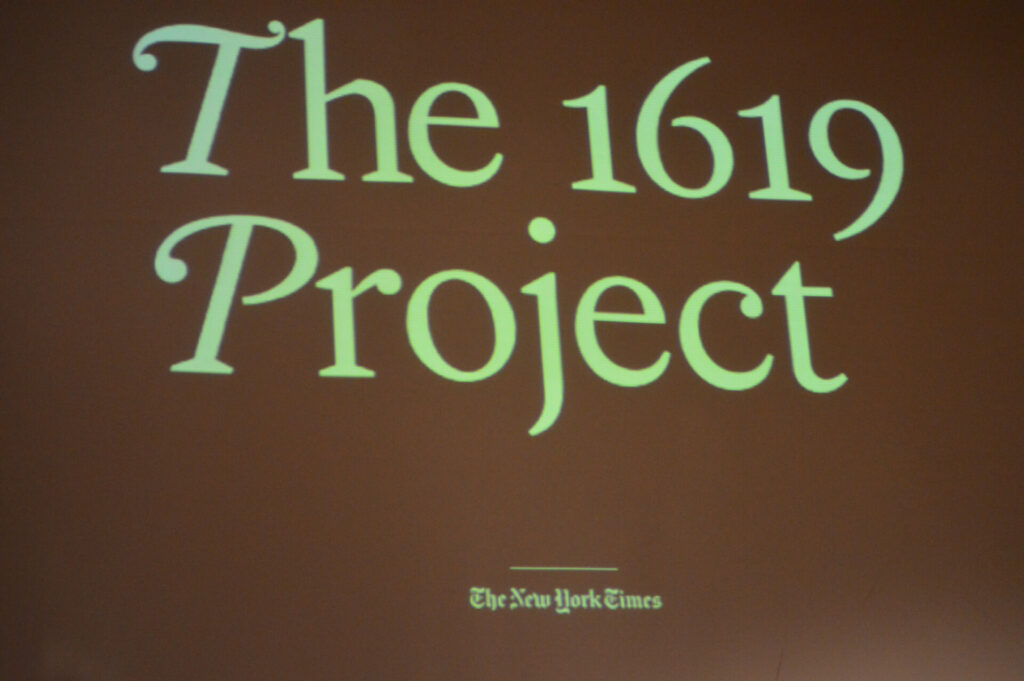 From statehouses to Congress, Republicans have launched into a fight against the teaching of “critical race theory,” which just a year ago was a niche academic term.

Experts in critical race theory say it’s about acknowledging how racial disparities are embedded in U.S history and society, and the concept is being mischaracterized by conservatives. But GOP lawmakers in the past few months have succeeded in pushing it to the top of state legislative agendas.

Governors in Idaho and Oklahoma have already signed measures to forbid the teaching of critical race theory in schools this year. Arkansas’ Republican governor let a similar measure become law without his signature, while proposals in Iowa and Tennessee are waiting for their governors’ approval.

In Michigan, state Sen. Lana Theis (R-Brighton) last week introduced similar legislation, SB 460, which would also ban schools from teaching about the “1619 Project” outlining the role of slavery in shaping American society that was published in the New York Times and won the Pulitzer Prize.

“Critical race theory is an invention of the extremist political left that has manipulated academia for decades and is now targeting private businesses, public institutions and, sadly, our K-12 classrooms, where it is indoctrinating young minds with anti-American falsehoods,” said Theis in a statement. “Its ‘woke’ proponents reject our country’s true history and our founding principles, in favor of an identity-based cultural Marxist ideology that seeks nothing more than victimization, envy, division, discrimination, and ultimately the destruction of our country and way of life.”

The legislation drew criticism from Democrats and academic freedom proponents.

“I can’t find the most appropriate adjective to describe the newly introduced legislation in MI to penalize schools for teaching about the very real history of racism in our country, but ‘harmful’ will do for now,” Sen. Stephanie Chang (D-Detroit) wrote on Twitter Friday in response to the legislation. “In the past few months, I have been… in numerous convos w/ AAPI [Asian American/Pacific Islander] parents, teachers, school board members & community leaders about the fact that our kids do NOT learn AAPI history – neither the racist laws nor the contributions made by AAPIs. The rise in anti-Asian hate has sparked tons of energy around this.”

Lawmakers in Arizona, Louisiana, Missouri, Texas, Utah, West Virginia and other states have waded into the debate, as well, although some of those efforts have failed.

Meanwhile, a group of Republican attorneys general from 20 states this week sent the Biden administration a 10-page letter chastising federal officials for using two grant programs as “a thinly veiled attempt at bringing into our states’ classrooms the deeply flawed and controversial teachings of Critical Race Theory and the 1619 Project.”

On Capitol Hill, U.S. Sen. Tom Cotton, a Republican from Arkansas, is trying to prevent the U.S. military from incorporating elements of what he characterizes as critical race theory in its training programs.

Thirty House Republicans, led by Dan Bishop of North Carolina, have also signed onto an effort to ban critical race theory from training for the armed services and federal employees.

The origins of the new drive track back to President Donald Trump, who warned about the academic approach during his final months in office, in the aftermath of George Floyd’s murder by a Minneapolis police officer. The Trump administration called critical race theory “un-American” and sought to ban its influence from the federal government.

Now with Trump out of the Oval Office, other Republicans are taking up the battle on new fronts.

“There’s no room in our classrooms for things like critical race theory,” Florida Gov. Ron DeSantis, a Republican, said in March. “Teaching kids to hate their country and to hate each other is not worth one red cent of taxpayer money.”

But those who teach about critical race theory say that conservative politicians are not correctly describing the approach, and the extent to which it is used in schools and workplaces.

Critical race theory, they say, came about in the 1970s and 1980s to explain why Black people and other people of color in the United States have not made more gains after the victories of the civil rights movement.

One of the theory’s central tenets is that U.S. society and government have always promoted racial disparities. Another key idea is that, after the country has made progress toward racial equity, there is often a backlash that erodes some or all of those gains.

It’s also in this polarized atmosphere that the University of North Carolina’s board of trustees, under pressure from conservative activists, earlier this month backed down from offering tenure to Nikole Hannah-Jones. Hannah-Jones is the New York Times journalist who led the 1619 Project.

In political back-and-forth, the term “critical race theory” has been used as a catch-all term to describe many attempts to address racial inequities.

Conservatives often link it to the 1619 Project and the work of Ibram X. Kendi, the author of “How to Be an Antiracist” and the director of the Center for Antiracist Research at Boston University.

But the field of critical race theory actually started as a way to analyze the U.S. legal system. Its founders were a loose group of legal scholars from various racial and ethnic backgrounds.

Proponents of critical race theory argue that, because race is a social construct, not a biological one, laws and other social norms are what perpetuate racial inequities. They examine the many ways society creates those lopsided conditions.

Thompson Dorsey, the USF professor, says when she instructs people using critical race theory, she hews closely to historical documents such as the three-fifths compromise of the U.S. Constitution, the Supreme Court decisions in Dred Scott and Plessy v. Ferguson, immigration laws, and laws that deprived women of legal rights.

“I’m not making things up,” she says. “I talk about racial history, because we don’t learn this in school. And we don’t learn how deeply embedded racism and white supremacy and patriarchy were embedded in every part of our country.”

From Tucker Carlson to an executive order

Rufo, the Manhattan Institute scholar, wrote several pieces in the summer of 2020 that scrutinized diversity training programs held in the wake of Floyd’s killing.

He criticized programs put on both by the city of Seattle, where he lives, and by federal agencies such as the U.S. Treasury and Sandia National Laboratories in New Mexico. He alleged that white employees were singled out and shamed in the training exercises.

“‘Anti-racism,’ as the diversity hustlers define it, doesn’t teach Americans to judge each other according to the contents of their character,” Rufo, who did not respond to a request for comment from States Newsroom, wrote for the New York Post last July. “Rather, the ideology stands for precisely the opposite: a rigid and simplistic account of race, in which minorities are permanent victims and whites are forever tainted by racism.”

Rufo’s pieces landed him an appearance with Tucker Carlson on Fox News. “What I’ve discovered is that critical race theory has become, in essence, the default ideology of the federal bureaucracy and is now being weaponized against the American people,” Rufo said on the show.

“[Trump] saw this monologue and instructed his team to call me the next morning, bright and early West Coast time,” Rufo related in a webcast for the American Legislative Exchange Council, known as ALEC, in December.

Indeed, the president’s directive repeated many of the allegations that Rufo made.

“Many people,” Trump’s order said, “are pushing a different vision of America that is grounded in hierarchies based on collective social and political identities rather than in the inherent and equal dignity of every person as an individual.”

His order prohibited federal agencies or contractors from using training that taught “divisive concepts,” including, among other ideas, the notion that the United States is fundamentally racist or sexist, or that “an individual, by virtue of his or her race or sex, is inherently racist, sexist, or oppressive, whether consciously or unconsciously.”

President Joe Biden rescinded the order as soon as he took office.

Conservative groups such as the Heritage Foundation and ALEC have stepped up pressure on conservative state lawmakers to rein in the teaching of critical race theory.

Particularly at the state level, the focus has primarily been on schools. In Tennessee, for example, a bill passed by the legislature would prohibit local school districts or charter schools from teaching or including materials that “promote or include” 14 different concepts. Many of those “divisive concepts” were included word-for-word in Trump’s executive order.

If schools don’t comply, they could lose state funding. The exact amount would be up to the state’s education commissioner.

The proposals to curb critical race theory have been politically explosive.

After Oklahoma Gov. Kevin Stitt signed one such law, he got kicked off a commission to commemorate the 100-year anniversary of the Tulsa race massacre.

A Louisiana lawmaker lost his position as chair of the House Education Committee for saying students should learn “the good, the bad and the ugly” about slavery, while promoting his bill to prohibit critical race theory.

In Utah, Democratic lawmakers left the floor of the state House when Republicans brought up resolutions to condemn critical race theory.

But the stakes are also high for school administrators and teachers who would be governed by the new laws.

Lawrence Paska, the executive director of the National Council for the Social Studies, a group that represents social studies teachers, worries about the amount of control lawmakers are trying to exert over teachers’ classrooms.

“This goes against what we know good instructional practice to be,” he says. “We’re a little baffled at the idea that we’re going to legislate away certain types of freedoms and responsibilities that teachers have.”

“We’re concerned with this notion of … limiting discussion about things like racism, sexism and discrimination, that we can’t talk about those things. That’s both against what we do in social education but more importantly, it’s against the very definition of First Amendment freedoms and academic freedom for both teachers and students,” Paska added.

Paska says the goal of teaching the faults of the country is to help make students better citizens, not to shame them.

“I don’t know an educator who thinks, ‘My job at the end of the day is to shame a student, is to shame a child, into feeling anything less than their full potential,’” he says. THE MORNING NEWSLETTER Subscribe now.