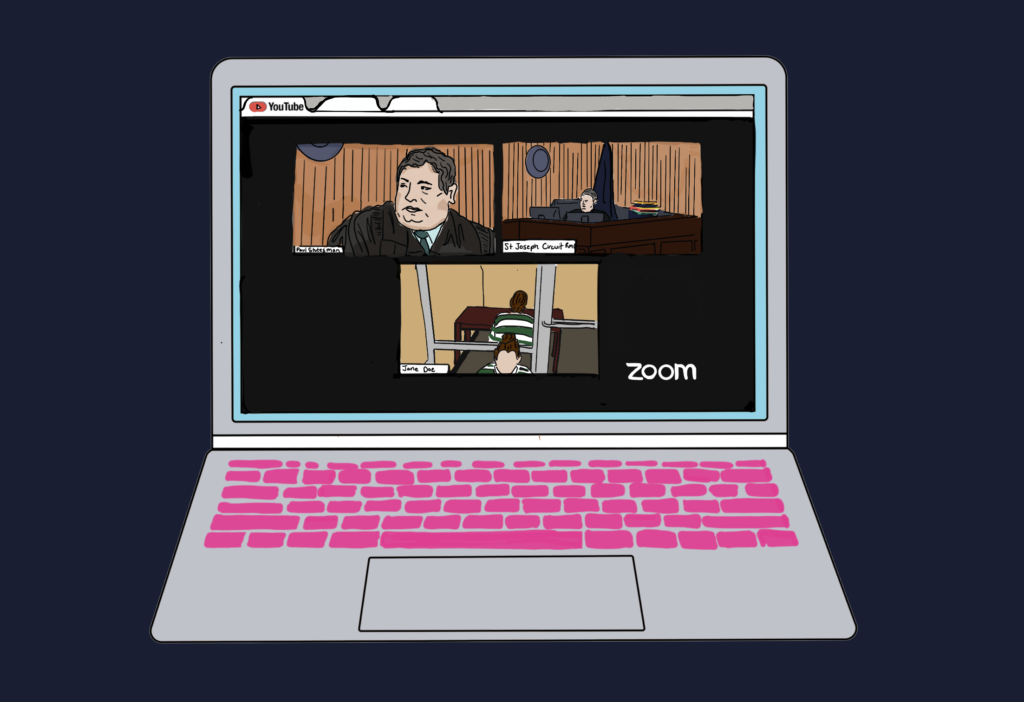 To watch St. Joseph County Circuit Court Judge Paul Stutesman orchestrate an afternoon of sentencing from the bench while utilizing Zoom and YouTube is akin to watching the “Minority Report” sans the ability to predict the future, and well, Tom Cruise.

The results are the same as they were before the global pandemic forced courthouses around the country to limit public access but the way in which Stutesman administers justice has certainly changed. In a courtroom previously occupied by lawyers, defendants, and alleged victims pre-pandemic, Stutesman now holds court with the help of two others in an otherwise empty room, swiftly moving those same people in and out of virtual rooms as he makes his way down a docket full of cases.

This change in methodology was a necessary fix to a very real problem, as COVID-19 caused a significant backlog of cases, and created an environment in which many offenders were able to post bail over and over again on repeated nonviolent offenses, as county jails wrestled with how to contain the virus within their walls. As the number of positive cases begins to dwindle and the percentage of Americans who have received the vaccine increases, courts will be tasked with determining whether “virtual justice” was a temporary solution to a seemingly temporary problem or the way of the future.

Stutesman is convinced the future is already here, and it isn’t going anywhere.

“It won’t be used for evidence, it won’t be used for trials but the pretrial things like a status conference, and in civil cases especially — to have an attorney drive here two and a half hours from Detroit to be here for a 10 minute hearing is just ridiculous,” Stutesman said. “The ability to do it on camera makes it more economical for the clients, they don’t have to pay for two and a half hours of the attorney’s travel time. And they’re more efficient, (attorneys) can have a case here, a case in Oakland, a case in Macomb, all within 40 minutes. They can do all three of them, whereas before that would be three different days for 10 minute hearings.”

Judges across the country have also found that holding hearings virtually reduces the number of no-shows, both in terms of individuals appearing before the court and jury summons. According to Scigliano, many defendants failed to show up in court prior the pandemic — about 20 percent in criminal cases in New Jersey’s superior courts, according to the National Center for State Courts, and about 11 percent in all cases in Michigan, but after both states moved online nearly 100 percent of the defendants appeared. In Texas, 60 to 80 percent of citizens summoned for jury duty appeared online, twice as many as those who showed up in person prior to the pandemic.

But critics of “virtual justice” often cite a lack of access to reliable internet service as a reason not to conduct hearings online, with an estimated 42 million Americans without access to broadband according to the FCC, which is certainly an issue, especially in a rural area like St. Joseph County. Stutesman, however, says it hasn’t been a significant issue since the county went online in the spring of 2020, and when an issue related to access does arise, there are ways around it.

“(Most) have access to these systems and know how to use these systems. When someone does say, ‘I’m sorry, I don’t have good wifi,’ I tell them ‘go to McDonald’s, go to the library,'” Stutesman said. In cases where an individual doesn’t have access to the internet or the technology required to jump on Zoom, the court will adjourn the hearing and have the person go to their attorney’s office at a later date and “do it from there.”

“That’s how we’re going to do it, just take excuses away — and some people (may actually have an issue) — I don’t know anyone who doesn’t have a phone or who has a phone without internet access now, you have to pay extra for that kind of phone,” Stutesman said. “But yeah, we’ll accommodate them. If they don’t have the technology to do it, you’re going to meet at your attorney’s office and do it from there.”

Another aspect of virtual court that has critics concerned is the actual administering of guilt, whether by a jury or judge. In the aforementioned Atlantic article, Scigliano cites preliminary evidence that suggests judges’ decisions can be impacted when not in the same room as the defendant:

“There’s some preliminary evidence that this distance can affect even judges, supposed paragons of impartiality. For nine years, starting in 1999, Cook County, Illinois, conducted most of its bail hearings via closed-circuit television. The sums required for release rose immediately and stayed elevated—51 percent higher, on average, a study in the Journal of Criminal Law and Criminology found. Bail did not rise in cases still heard in person. Changes in the judicial roster may have played a part, but it appeared that judges were more willing to trust defendants and grant lower bail when they saw them face-to-face.“

Stutesman argues that judges can actually be more effective during bench trials in a Zoom format because the technology allows him to see the courtroom as a whole, all at once. “As far as criminal trials go, we’ll never do them on the internet, as far as civil trials, I’ve done a bench trial on the internet and when I talk to judges across the state they are of the same opinion that they can see better on the internet. Talk all you want about ‘in the courtroom,’ but I can’t see the witness who is testifying in the courtroom (from the bench), I have to watch it on a screen anyway because they’re too low. And if I’m watching him, I can’t watch them, whereas I got it on one screen and everybody’s picture is there — during that bench trial I was able to see everybody’s reaction, so when the one witness was testifying I could see the other side’s reaction — it was a lot easier to tell who was telling the truth and who wasn’t, who was doing stuff and who wasn’t.”

Many attorneys also argue they can’t be as effective when speaking to a jury or a witness through a computer screen, an inference Stutesman doesn’t agree with. “The attorneys are the ones who will say, ‘I need to develop that rapport.’ Attorneys are notorious for thinking they have more power over a case than they do. You talk to an attorney and they say, ‘That juror was nodding to everything I said, I had that rapport,’ then in the jury room they say, ‘Well, he was a nice guy but I just didn’t believe a word his client was saying.’ They didn’t buy it. So you can believe this ‘power of rapport,’ and the power the attorney has but it comes down to the facts and how they come out from the witness, not what the attorney does.”

Critics of Zoom court also have concerns about the hearings being streamed live on YouTube. While streaming online fulfills the constitutional requirement that court proceedings are public, it increases the chances of said proceedings being recorded by a third party and shared across the internet, amplifying embarrassment and violating the privacy of someone who had a brush with the law or worse, was a victim of a crime. Stutesman’s peer, District Court Judge Jeffrey Middleton, has become a bit of an internet celebrity after multiple videos of his court proceedings went viral, something Stutesman wants no part of and does his best to avoid.

Stutesman records one case at a time to avoid broadcasting something he shouldn’t. Middleton has previously streamed proceedings for hours at a time while he goes from case to case, a practice Stutesman said leads to those viral videos. “I don’t have those issues (Jeff has run into), if someone isn’t dressed appropriately or has the wrong name (under their video), we talk about that before we’re on YouTube, before we’re on the record. So I don’t have those issues where people are trying to do that stuff, which if you read the comments on Reddit or wherever, even they say, ‘It seems like people are trying to do something to go viral.’ […] My goal is to never become a viral sensation.”

Ultimately court proceedings, whether online or in person, will present issues and complications. Stutesman said it’s the court’s responsibility to adapt “with the times,” as determining how and where court action is conducted and how to do it correctly becomes just as important as staying current with the law. “They’ve changed the court rules so that it’s now standard for attorneys to not only be competent in the law, they have to be competent in technology, they have to be up to date with technology because that’s just where we’re going.”