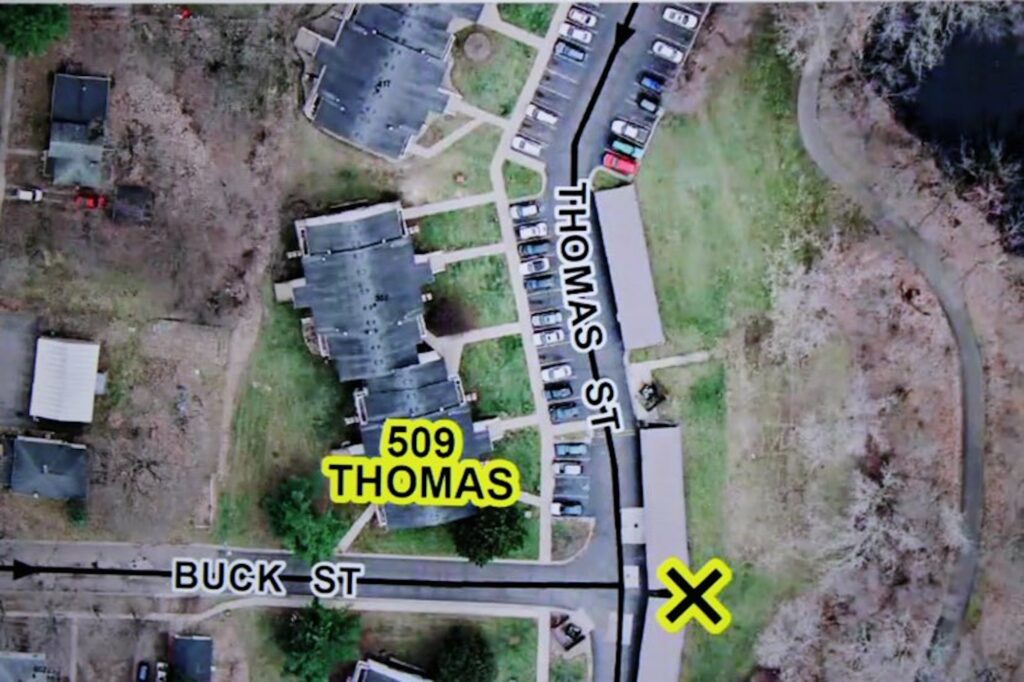 Pictured is the riverwalk crime scene graphic entered into evidence during the trial of 22-year-old Lee Parker, Jr. this week in St. Joseph County Circuit Court. The X in the graphic denotes where Grace Hussey was found by the Three Rivers Police Department after she was shot in the head on April 9, 2020 near River Trail Apartments in Three Rivers.

Testimony in the trial of Lee Parker, Jr. concluded just after noon on Thursday, June 24 in St. Joseph County Circuit Court. The trial will resume Tuesday, June 29 with jury instructions and closing arguments prior to the jury beginning deliberations.

Parker, who turned 22 this week, stands accused of shooting 17-year-old Grace Hussey, now 18, in the head near River Trail Apartments in the early morning hours of April 9, 2020. The Three Rivers man is charged with one count of assault with intent to commit murder, and one count of felony firearm. If convicted, Parker could be sentenced to any number of years to life in prison for the alleged assault, and two years for possessing a firearm in commission of a felony.

Witnesses during Wednesday’s proceedings included testimony from Hussey, and the lead investigator in the case, Det. Sgt. Sam Smallcombe of the Three Rivers Police Department. A friend of Hussey named Logan Biggs also testified, stating he lent his phone and jacket to Hussey before she allegedly left his house on Spring Street to meet Parker near Scidmore Park sometime after 11:30 p.m. on April 8, 2020.

Lastly, Shasta Kunz, a neighbor of Parker’s girlfriend Sunshine Swinehart, testified she saw Parker walking down the third floor stairs of Walnut Meadows Apartments at 12:19 a.m. on April 9, 2020, just minutes before the first 911 call was placed at 12:22 a.m., with the caller claiming to have heard gunshots near River Trail Apartments. Defense attorney Paul F. Gipson argued Parker being at Walnut Meadows so close to that 911 call would have made it impossible for Parker to be at Scidmore Park or River Trail Apartments, as he did not own a vehicle, and would have traveled on foot to that location. Smallcombe testified Thursday that the TRPD was never able to verify whether shots were actually fired at 12:22 a.m. but did confirm a call was made at that time and again at 1:26 a.m., after which officers found Hussey.

Several questions were raised Thursday about why TRPD’s investigation into the shooting was conducted the way it was, including why the county’s community emergency response team wasn’t deployed, why the department didn’t send any evidence to the Michigan State Police crime lab for testing, and whether the TRPD investigated any suspects other than Parker.

Smallcombe said St. Joseph County’s emergency response team was not deployed because the crime scene itself was small and manageable in nature, unlike if the shooting had occurred in a house. He added that calling on that particular team would have meant pulling a lot of officers from a number of departments throughout the county during a global pandemic that had exasperated most departments’ already significant workforce shortages.

The detective said because no weapon was found, ballistics testing was unnecessary, and gunshot residue, unless collected immediately in what Smallcombe called a certain number of “magic hours” after a shooting occurs, can easily be removed from a person’s hands and body, which is why the TRPD chose to forgo the crime lab.

As far as the investigation into Parker, Smallcombe said none of the department’s leads “pointed to another individual” other than Parker, and “we never received another tip or lead from the public stating the shooting was done by someone else.”

Hussey testified Thursday that on the night of the shooting she was “worried” she was pregnant, so she arranged a meeting with Parker “so we could work through it.” Hussey didn’t know until after the shooting occurred that she was not, in fact, pregnant at the time.

Hussey communicated with Parker through Facebook Messenger, and Parker allegedly asked Hussey to meet him “at his spot.” Hussey said she walked from Biggs’ house on Spring Street past the old hospital to the trails near Scidmore Park, where she and Parker sat on a bench under a lamp post. She said the conversation started out calmly but Parker got “more and more angry” the more they talked.

As the conversation progressed Hussey and Parker began to walk the trail, during which time Hussey said she noticed Parker was “walking very stiffly,” and at some point during the conversation he had put gloves on. Hussey said she eventually decided to return to Biggs’ house, walking up the trial toward a set of stairs near River Trail Apartments up an embankment.

Hussey said she doesn’t remember how but she found herself kneeling just beyond the apartment complex’s carports, near a bike rack and some distance beyond the aforementioned staircase, with her head down and her wrists locked above her forehead. Hussey claimed that she saw, through the crook of her arms, Parker draw a small gray metal revolver with a wooden handle. She then heard two shots and fell to ground.

Hussey said she waited a few minutes to make sure Parker was gone before crying for help. She was eventually found by Three Rivers Police, and taken to Kalamazoo for treatment of the “horseshoe shaped laceration” and puncture wound she sustained in the shooting. Hussey went on to spend five days in the intensive care unit, during which time “whole left side of (her) body was numb,” experiencing paralysis in both of her legs, and weakness in her left arm.