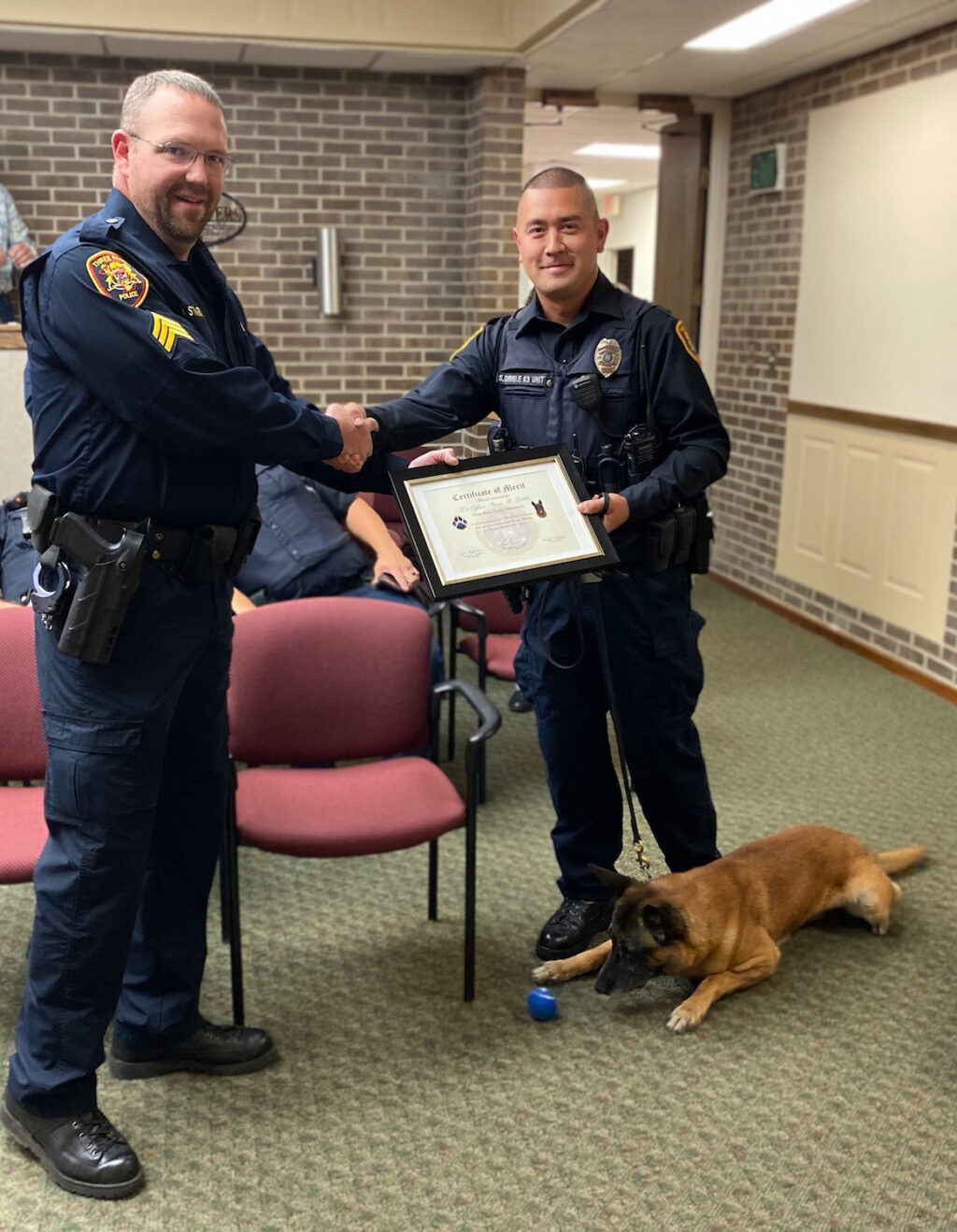 Sgt. Matt Stark (left) presents Officer Steve Dibble and K9 Jake with a certificate of merit for their efforts in recovering a runaway juvenile in Centreville back in September. (Alek Haak-Frost|Watershed Voice)

Sgt. Matt Stark, who presented Dibble and K9 Jake with a framed certificate of merit, said the pair were instrumental in recovering an autistic teenager who “experienced an episode” and walked away from Centreville High School last month. Deputies from the St. Joseph County Sheriff’s Department attempted to locate the teen for four hours prior to requesting a K-9 track from the Three Rivers Police Department.

“Officer Dibble and Jake responded to the Centreville area with no specific area to search,” Stark said. “Officer Dibble deployed his training and his experience to evaluate the terrain, conditions, and elapsed time to formulate probable search areas. After determining probable areas and possible paths of travel, Officer Dibble took proper precautions prior to deploying Jake, and deployed Jake in a manner combining multiple K9 disciplines. In adaptation to situations due to Dibble’s handling experience and K9 Jake’s seasoned abilities, the young lady was located over a mile away in a marsh area, and unable to rescue herself. Like the many deployments before, Officer Dibble and K9 Jake were instrumental in reaching a successful conclusion to the crisis at hand.”

The Three Rivers City Commission were presented with potential hybrid meeting options Tuesday, two weeks after a request was made for hybrid meetings during the public comment period on October 5, as well as urging from multiple commissioners for city staff to look into the issue further.

City Clerk Stephen French provided the following report to commissioners prior to Tuesday’s meeting in the commission’s agenda packet:

City Commissioners requested staff review available options which would to allow the City Commission meetings to be held with a combination of in-person and virtual settings (“hybrid meetings”).  The virtual settings would allow the public to not only view the meeting remotely, but also have the opportunity submit comments as if they were at the meeting in-person.  This option would be held in “real-time”, or “live”, and would not require citizens to either submit pre-recorded messages via voicemail, or submit other message types such as emails, texts, social media comments, etc.  There are a few options that are available to allow this “live” feature, including Zoom, Facebook, and other specialty software applications.

The current sound and video hardware in the City Commission Chambers would allow either option to be implemented, at least in a basic mode.  With our current setup, there would be a single, wide-angle video of the meeting and the audio would use our existing microphones audio mixer board.  The audio quality would require each person to speak clearly and directly into the microphones so that people watching remotely could hear what was being said.  Hybrid meetings would also require a staff member to monitor the recording throughout the meeting.

I called a number of cities throughout the state and the City of Portage is the only one that is currently using the “hybrid” model.  St. Joseph County used a similar system for a few weeks but has not used it in many months.  The cities of Sturgis, Coldwater, and Grand Rapids broadcast their meetings through a local, government channel or through their own social media page, and do not offer the hybrid meeting option.  The City of Kalamazoo, City of Battle Creek, and Kalamazoo County Board of Commissioners are still meeting remotely via Zoom.

If the City Commission wants to have hybrid meetings, city staff would work with an outside vendor to help develop a system using the existing audio and video equipment.  A vendor would also be able to provide costs estimates for any new equipment that would be necessary for the project.

An option to the “hybrid” meeting model, would be to simply create a Facebook Live or YouTube video that would broadcast the City Commission meetings.  This option would not allow virtual citizen interaction, but would allow the meetings to be viewed by the public without having to physically be in attendance, and could be replayed at a later date and time.

This option could determine if there was adequate citizen interest and the program could be re-evaluated after a few months.

Commissioner Daryl Griffith said he would like to see the meetings broadcasted “at the very least,” if the method is “something that’s reasonably priced.” Commissioner Clayton Lyczynski said broadcasting the meetings is a “very reasonable first step,” while City Attorney J. Patrick O’Malley said city staff should do “a reasonable amount of study” and consider what’s worked and hasn’t worked in other communities before committing to a hybrid format.

The commission ultimately agreed by consensus to have city staff look into the matter further.