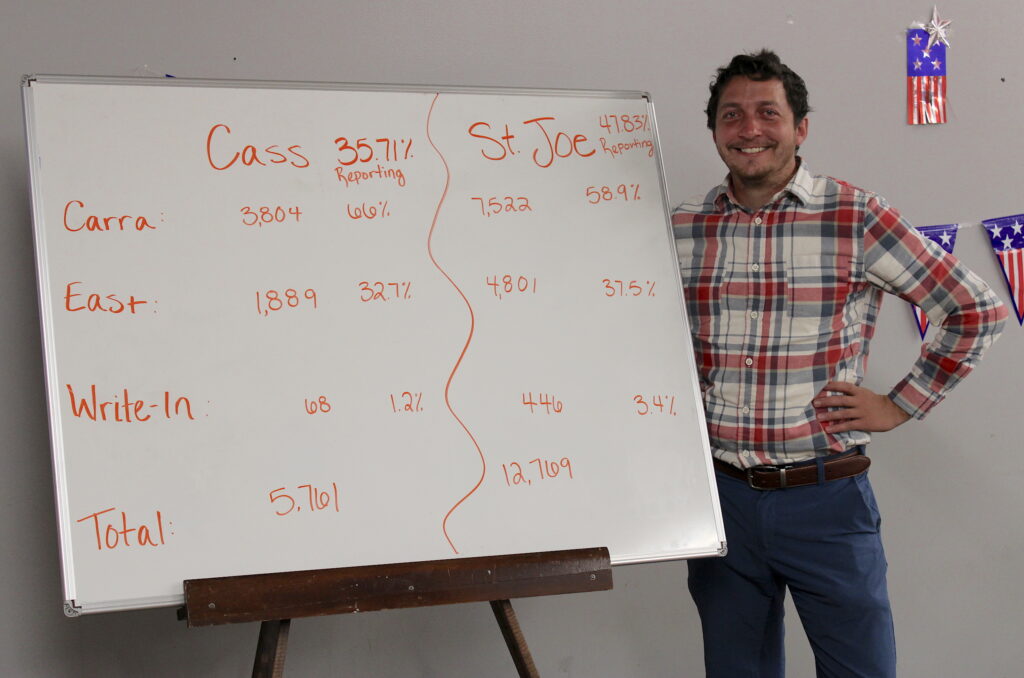 As of 10:59 p.m. Tuesday night, with just under 72 percent of St. Joseph County precincts reporting, Republican Steve Carra led Democrat Amy East for the seat of 59th District Representative in the Michigan Legislature by a margin of approximately two to one. At that time, Carra carried 12,200 votes in the county to East’s 6,775. He also held a significant lead in Cass County. Speaking from St. Joseph County Republican Party Headquarters in Three Rivers around 11 p.m., Carra said his campaign was declaring victory.

“I just want to thank everybody from the community who has voted for me and has supported me through this process,” Carra said. “I’m looking forward to representing the community and doing the best I can to represent the people, not large donors and special interest groups who want favors in return.” Carra said his main priority is the issue of life. “I’m 100 percent pro-life, from the moment of conception,” Carra said.

“If anybody has any questions on my stance on the issue, I’d encourage them to come on December 1 to Firm Foundation Ministries in Centreville from 5:30 to 8 p.m. I’m going to have an event there. I’d love to invite anybody to come on out. We’ll have plenty of time for questions and answers, and we’d love to answer people’s questions,” he said.

In comments to Watershed Voice, Hoffmaster said he felt the race, including his opposition’s campaigns, were “very respectful on all sides, and I appreciate their effort.” Hoffmaster said, “I look forward to this new chapter and representing everybody in St. Joseph County.” Regarding priorities once he assumes the seat, Hoffmaster said, “I said in my campaign I really want to look toward economic development,” especially following COVID-19 impacts.

In the Second District, incumbent County Commissioner Kathy Pangle won with 1,307 votes, while Kathy Greaves held 509 votes. In follow-up comments to Watershed Voice, Pangle said, “I’m honored to be able to serve and represent District Two once again, and I thank everyone for their support and confidence in me. I’d also like to thank my challenger for running a great and clean campaign without any attacks on anyone. I am confident she also wants only the best for our county as well.”

Races for the positions of Clerk and Treasurer in Lockport Township were also contested. With 794 votes, the Democratic incumbent for the Clerk’s position, Penny Ream, trailed Republican Christy Trammell, who won with 1,138 votes. Republican Mike Friesner, the incumbent for the Treasurer position, won with 1,275 votes, trailed by the 647 votes held by Democratic challenger Elvontio Peterson.

Watershed Voice reached out to both Trammell and Friesner. Trammell said, “I am honored to be chosen to represent the residents of Lockport Township and look forward to working with the Board to help enhance our Township.” Friesner said he was glad to have won by a roughly two-to-one margin. He said he was disappointed at Ream’s loss, but said, “I think everything else was done reasonably well.”

Six candidates vied for four open seats on the Three Rivers Community Schools Board of Education. In the final results, the four leading candidates included Julia Awe with 3,557 votes, Ben Karle with 3,540 votes, Melissa Bliss with 3,406 votes, and Anne Riopel with 2,927 votes. The two trailing candidates included Ryan Cox with 2,562 votes and Geraldine Jaramillo with 2,276 votes. Jaramillo and Awe were both incumbents.

Although not enough votes had been totaled late Tuesday night to suggest a possible winner of the U.S. Presidential Election and other U.S. races, St. Joseph County votes carried current President and Republican Donald Trump at the county’s 12:23 a.m. final report. Trump held 18,128 votes in the county, while Democrat Joseph Biden held 9,262 votes. More than 500 other votes went to third-party candidates.

In the 6th District for the U.S. House of Representatives, Republican incumbent Fred Upton’s vote totals included 18,141 votes from St. Joseph County, while Democrat Jon Hoadley had 7,486 of the county’s votes. More than 1,200 of the county’s votes went to third party candidates, and there were also 564 unqualified write-in votes for the seat.

In other county, city, and township-level races, a variety of candidates faced no challengers in the General Election Tuesday. All of them are Republicans. Each seat received some write-in votes on Tuesday night. However, write-in numbers are generally in single and double digits, and without other, major challengers, these candidates are the presumptive winners of their respective races.

Current County Clerk Lindsay Oswald was unchallenged to retain her position. The same is true for Drain Commissioner Jeffery Wenzel and Surveyor David Mostrom. As presumptive winner for the seat of County Treasurer/Finance Officer, Kathy Humphreys will replace Judith Ratering, who is retiring. At a regular meeting of the St. Joseph County Commission on Tuesday evening, several commissioners remarked that Ratering’s departure will be bittersweet and thanked her for her 10 years of service.

In Park Township, Republican John English will keep the seat of Township Supervisor. Republicans Michael Lee Kinne and Thomas M. Springer were unchallenged for the two available Trustee seats, as was Cindy Fenwick for Treasurer and Lari J. Roberts for Township Clerk.

In Lockport Township, outside of the Clerk and Treasurer positon races, Mark Major retains the seat of Township Supervisor. Rick Daniels and Donna Grubbs are slated for two available Township Trustee seats.

In Fabius Township, Ken Linn beat Daniel K. Wilkins in the primary by only three votes for the Township Supervisor position but faced no challengers in the General Election. Judy Holman and Cliff Maxwell faced no opposition for the two available Trustee positions. Carol Wilkins was unopposed for Township Clerk, Cindy Haradine was unchallenged for Treasurer, and Don Falborski faced no competiton for the seat of Constable.

Voter turnout in St. Joseph County was 75.53 percent. There were 28,126 total voters at the start of election day, and 37,239 registered voters as of the final report early Wednesday morning. This means that 9,113 people registered to vote countywide on Election Day. The last directly comparable election took place in November 2016. According to the St. Joseph County Clerk’s Office, at that time, 24,180 ballots were cast throughout the county.

For a complete picture of the results all of the county’s precincts and races, including those for other townships, school boards, ballot proposals, and higher education boards, a link is available here.

This story has been updated since it was first posted to include a response from Christy Trammell, the Lockport Township Clerk-elect.