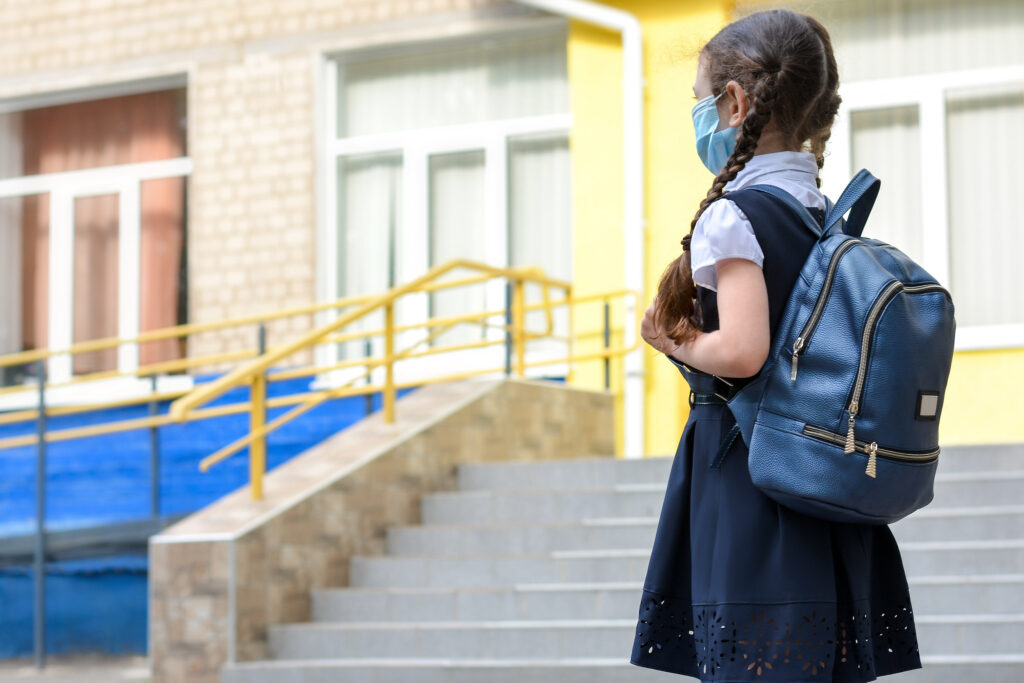 Michigan has over 800 school districts that all individually felt the pain of COVID-19, but the state’s Partnership schools and districts were among the hardest hit by the pandemic.

Under the former Gov. Rick Snyder administration in 2017, the state formed the Michigan Partnership Model to improve the state’s lowest-performing public and charter schools and keep them from closing.

In March 2020, the pandemic hit Michigan, bringing upheaval to schools. When Gov. Gretchen Whitmer closed schools buildings that month due to the climbing number of COVID-19 cases, districts across the state scrambled to craft a plan to meet students’ needs virtually. Over the last year, the pandemic has highlighted the inequities the struggling, underfunded Partnership schools face while they work to make ends meet during this current school year.

Before the 2020-21 school year began, Whitmer and the GOP-led Legislature agreed to a plan that left decisions about learning format to individual districts. In August, when school districts were finalizing their Continuity of Learning (COL) plans, 31% of Partnership districts planned to be fully remote, compared to 11% of non-Partnership districts.

When COVID cases again spiked in the November, the state temporarily paused in-person learning for colleges and high schools for several weeks to reduce the spread. In December, Whitmer announced that restriction would be lifted.

Students at Wayne-Westland Community School District, a Partnership district, are being taught in hybrid model as of Monday after nearly a year of virtual learning, but there wasn’t a big push from parents to get their student back in the building.

“Certainly there were some parents who would like to have their kids back in school faster, but there wasn’t a line of people fighting to get their kids back in schools,” Tera Shamey, director of curriculum, instruction and assessment at Wayne-Westland Community School District said. “What I’ve seen in the return to school fight is really specific to the most privileged communities and the most privileged parents.”

According to an October study done by Michigan State University’s Education Policy Innovation Collaborative (EPIC), Partnership schools are largely made up of at-risk students and students of color.

The districts work with the state to design individualized three-year improvement plans, set goals and design accountability measures to ensure that the districts are in a better position once they move out of the program.

In October 2019, EPIC released its report looking into Partnership schools turnaround which found that through the course of the program, most schools experienced achievement gains and had greater teacher retention, but there was still room for improvement in improving student outcomes.

One year later, the report was less optimistic, in that the progress of these schools was uneven and there was not a significant improvement in on-time gradations or high school dropout rates.

Many of these districts have needed to go above and beyond what their Partnership agreements with the state entail just to ensure quality education throughout the pandemic. Many of the extra expenses schools have needed to cover this year, such as devices, building improvements, covering staffing shortages, etc., would not be covered by Partnership program funding.

Partnership districts are largely in historically disadvantaged communities, including Detroit, Saginaw, Flint, Kalamazoo, Pontiac, Muskegon and Benton Harbor, where a majority of the residents are either Black or Hispanic.

According to the EPIC study, the racial makeup of Partnership schools differs drastically from most Michigan school districts, where nearly nine of 10 residents who live in the average Michigan district are white.

The home lives of many Partnership district students are also different than many other students in Michigan.

Dr. Josha Talison, superintendent of Ecorse Public Schools, says that because 45% of the student body lives in extreme poverty, “you have to have in a triage format for those students who are coming in with specific needs, you need to be able to address that.”

While the pandemic showed Michiganders that not many school districts had the funds or equipment to handle the fallout head-on, Partnership districts and schools, as well as the communities in which they reside, had even greater challenges due to the pandemic.

“And those are things you never have to worry about at districts that don’t have that population,” Talison said.

According to a study done by the University of Michigan and the Michigan Department of Health and Human Services (DHHS) Black Michiganders have higher case rates, death rates and reported worse outcomes during their recovery from COVID-19 than white Michiganders.

“In a district where you have a significant population of Black and Brown students, they’ve been even impacted by COVID-19 more than the general population. So there’s been a significant impact on the community,” Shamey said.

To help with this, the district implemented a mental health Task Force of social workers, counselors and psychologists to provide resources to administrators, teachers and parents.

The social and emotional impact of COVID-19 carries with students and teachers and cannot be held mutually exclusive from their experiences in the classroom.

Non-Partnerships teachers reported they struggled more than Partnership schools in only three categories: Keeping students engaged in schoolwork, finding instructional plans and materials that work well in  a virtual classroom and consistent internet access for teachers.

Partnership districts were more likely to provide devices and internet access to students during the pandemic than non-Partnership schools.

Ecorse Public Schools implemented a hybrid model for the current school, where about 75% of the student body is learning virtually. Talison said this was made possible because the district was able to provide devices to every student before the pandemic hit and for the current school year the district provided hotspots to students learning from home.

While the district was able to provide the tangible needs of the students, the greatest struggle is increasing student engagement.

“Our students really depend on relationship building with our teachers and it helps them with their learning,” Talison said. “This has put a strain on that aspect, because you can’t have that personal touch with students who are in a virtual setting.”

While all schools moved to remote learning at the end of last school year and many remained virtual or offered a hybrid learning environment this school year, districts across the state had to create plans on how to have regular check-ins with students.

A majority of schools had a plan in place for this, the priorities for these check-ins differed between Partnership and non-Partnership schools.

Partnership districts were more likely to specify that student check-ins should cover students’ socio-emotional health and assess whether students needed additional support from their schools, while non-Partnership districts were more likely to use check-ins to provide feedback to students about their learning and for social interactions between students.

The pandemic has taken a toll on Michigan’s state fiscal outlook. With an already underfunded education system prior to the COVID crisis, education experts are concerned how schools will be impacted in the future — especially the state’s most disadvantaged districts.

Whitmer’s Fiscal Year (FY) 2022 budget plan that begins Oct. 1 — after the start of the 2021-22 school year — includes a $14.7 billion investment for the School Aid Fund (SAF), which primarily funds K-12 education, but relies heavily on one-time spending for certain programs. While the SAF has largely been held harmless for the near future, the outlook of school funding in Michigan is unknown once the federal dollars to support Michigan through the pandemic run out.

Randy Liepa, superintendent of the Wayne Regional Educational Service Agency (RESA), said the state needs to prioritize the funding model of the School Finance Research Project, which formulates school funding based on need, which is a formula that would likely put more dollars in Partnership schools.

“While we’re very appreciative of what occurred last year and this year, and we certainly have at least a budget that isn’t looking at a reductions for school districts next year, what we do need to look at is that long term focus on the school finance research collaborative research,” Leipa said during a press conference last month. “It really starts to focus on these equity issues and meeting the needs of all students across the state of Michigan. So when we’re doing this learning recovery with our students, it doesn’t end in 15 months, but it continues for the years to come.”

The state budget does have extra money to help assist Partnership districts through competitive grants, called 21H grants, but it isn’t much.

Since the start of the program, the funds for this program have stayed pretty stagnant at $6 million to be shared between the 27 Partnership districts, with the exception of the 2018-19 school year when the program was bumped up to $7 million.

Gloria Chapman, the interim director of the Michigan Department of Education Office of Partnership districts, noted the amount of funding for the program “is based on the funds allotted to Partnership Districts by the legislative branch.”

When the Snyder administration designed the program, the tight budget for 21H grants was intentional. Former Superintendent Brian Whiston and Snyder wanted the majority of financial resources for school improvement to be locally based by district funding reallocations or fiscal support and in-kind services from community partners.

In Ecorse, Talison said the grants made it possible, either by supplying the funds or by lifting the burden from other areas in their budget, to implement their summer school program and their multi-tier system of support (MTSS) services, which is a framework used to provide targeted support to struggling students.

“It’s very beneficial, but it’s a limited amount of funds for so many schools, but you have to be thankful for what you get,” Talison said.

According to the EPIC study, most district leaders in the Partnership program felt the same way as Talison and Shamey: It was helpful, but not enough.

The pandemic has shined a light on the fragility of the state’s education system, from funding, student achievement and the needs of the students and communities it serves.

But for many of the schools in the state’s Partnership program, fragility isn’t a new concept. It’s been a struggle for these schools to stay open and succeed for many years, even without a pandemic, and now there are a whole new set of challenges from which to recover.  HELP US GROW Make a tax-deductible donation.