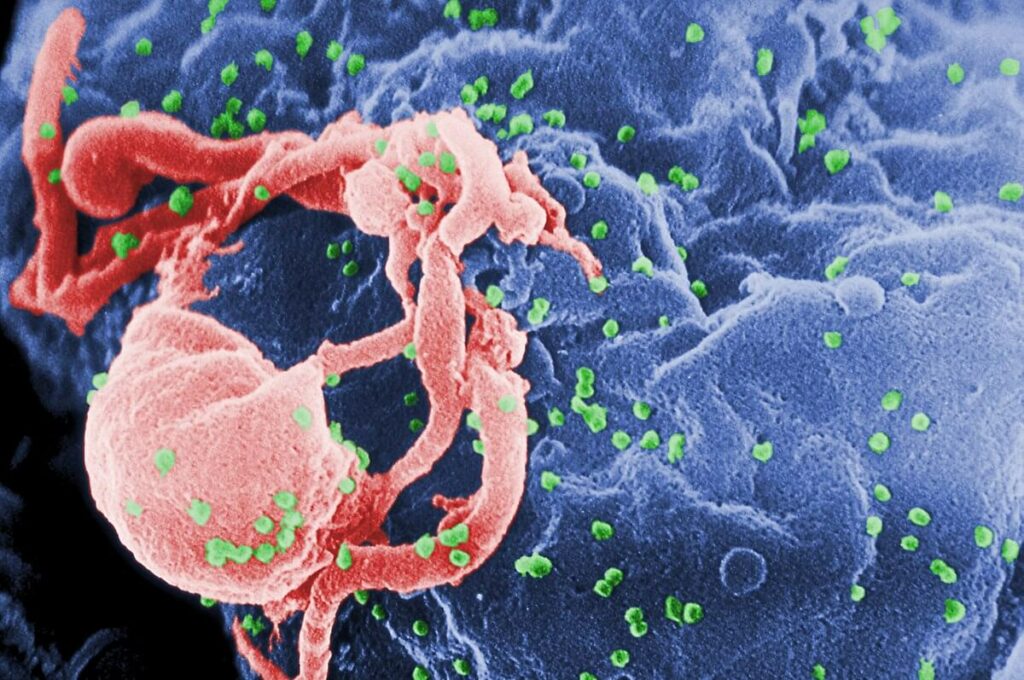 HIV budding from CD4 (Centers for Disease Control and Prevention)

“Why are you talking to them?” Hank Millbourne remembers friends saying to him during the 1980s gay scene in Detroit about other gay men. “They have the package.”

Millbourne had only a passing idea of what the “package” was, but he was quickly taught the alleged telltale signs of it: darkened fingernails from using AZT, then the only approved treatment for HIV. In Black Americans, it had the odd side effect of turning some people’s fingernails dark black.

“The package” would consume Millbourne’s life for the next two decades. He was completing his master’s degree in social work at the University of Michigan when he was first confronted with the whispers of the disease. It had already washed over the large urban centers of the East and West coasts of the country, and by the mid-’80s was racing through Michigan’s population centers.

Forty years after the first published account of five previously healthy homosexual men in Los Angeles with a rare pneumonia tied to immune suppressed people, HIV remains an ongoing epidemic in the United States with thousands of Americans being diagnosed with the diseases every year. Most of the newly diagnosed people are young Black men who have sex with men and transgender women of color.

State health officials cheer small declines in the rates of new diagnoses of HIV, particularly among young Black men who have sex with men. Those rates were highest in 2013 at 133.1 young Black men to 103.8 in 2018.

Of those 16,306 Michiganders living with HIV, 10,437 live in the Detroit metro area, which includes the city of Detroit, as well as the remainder of Wayne, and all of St. Clair, Oakland, Monroe, Macomb and Lapeer counties.

One of every 10 people diagnosed with HIV in metro Detroit has never been linked to care, similar to the rest of the state. (Care means a person is provided an opportunity to access antiviral medications, which in turn will lead to better health outcomes and a suppression of the virus, preventing them from sexually transmitting the infection.) But for those linked to care, 44% weren’t connected until 30 days after their diagnosis, 10% less than those in the rest of the state.

The racial disparity of HIV has existed from the beginning of the pandemic. While that first Morbidity and Mortality Weekly Report on June 5, 1981, failed to identify the race of the men impacted, Dr. Michael Gottlieb, the Los Angeles doctor who made the report to the Centers for Disease Control and Prevention (CDC), noted in 2011 that the men were white. In that same interview with the PBS show “Frontline,” he noted the next four cases of the rare pneumonia he treated were in people of color. First, it was two Black men, then a Haitian man, then a gay Black man. In the first nine documented cases of HIV he dealt with, 44% were in people of color.

The disparities in who is getting HIV, and who is most at risk, are stark. Recent studies have found that one in two Black men who have sex with men will be infected with HIV in their lifetime.

It’s a disparity that DHHS, as well as the state’s first Black lieutenant governor, Garlin Gilchrist, recognize that requires action.

DHHS officials said the department is working to expand access to the HIV prevention drugs, an intervention called Pre-exposure Prophylaxis (PrEP), by funding public health clinics to provide the testing and access to the expensive drugs.

Katie Macomber, director of the Division of HIV/STD programs at DHHS, said the department is also working overtime in providing training for employees at the state and community organizations with the tools to review and address systemic racism and trauma.

And the trauma of racism is a factor, said experts interviewed. Renee Canady, executive director of the Michigan Public Health Institute, noted that racism is a stressor that reduces the efficacy of the immune system.

“I don’t have any science to support it, but I do think the ongoing trauma of slavery and discrimination over generations has an impact, genetically,” she said.

There is some evidence revealed in a 2013 study, published in the Sociology Compass, that generational trauma of racism can impact the genetics of people.

Both Millbourne and Curtis Lipscomb, executive director of LGBT Detroit — the area’s only Black organization working with sexual minorities — said the focus of HIV has been as a “white man’s disease.”

“The information we were providing early on didn’t speak to people like me,” said Millbourne. “It didn’t have pictures of people who looked like me. We had to recreate that information to distribute to the community.”

Lipscomb recalls the rise of the radical AIDS Coalition to Unleash Power (ACT UP) in New York City in the mid- to late ‘80s.

“I knew what they were doing was important for me, and about me, but it was not a space where I felt welcome,” he said of ACT UP activities.

Both men told stories of the racial segregation in queer spaces in Detroit and New York.

Tim Retzloff, a professor at MSU with a doctorate in history for Yale, is an expert in the pre-1985 history of gay cultures in Michigan. He said that most gay nightspots were segregated, with one clear stand out. That place was called Todd’s and was owned by an interracial gay couple. They made the space safe for black and white patrons.

But racial segregation and a fear of the so-called “tipping point” of allowing too many people of color into white queer spaces kept spaces separate for Black and white communities.

Millbourne and Lipscomb spoke of Menjo’s, a popular gay nightspot in Detroit, that was infamous for having stricter identification requirements and dress codes for men of color, limiting how many Black men could get into the bar on a night.

“And once you did get in, if you did,” said Millbourne, “all the Black men were in this corner of the bar, together.”

That segregation meant Black men who were engaging in risk-related behaviors for HIV were not getting information about HIV, said both Millbourne and Lipscomb.

Treatments were released in 1996 that helped make living with HIV a manageable chronic disease. However, those interviewed for this story said community-based organizations in some ways failed to recognize the lack of access to resources to pay for the expensive, life-sustaining drugs. Prevention messaging continued to focus on white, gay men. And HIV continued to spread in social systems for Black men who had sex with men and transgender women.

A study published in the American Journal of Public Health, found that while Black cisgender men who have sex with men do not engage in any more risky behavior that white men who have sex with men, they still have a significant likelihood of contracting the virus. No definitive explanation has been arrived on to understand this phenomenon, but literature points to significant racism, poverty, housing instability and higher prevalence of the virus within Black and Brown communities as likely drivers.

“We have to deconstruct those race systems if we are going to address HIV and end it,” said Canady. “I tell my team leaders here all the time that if we are still doing something the same way we did five years ago, we are failing. We have to change. We have to evolve.”