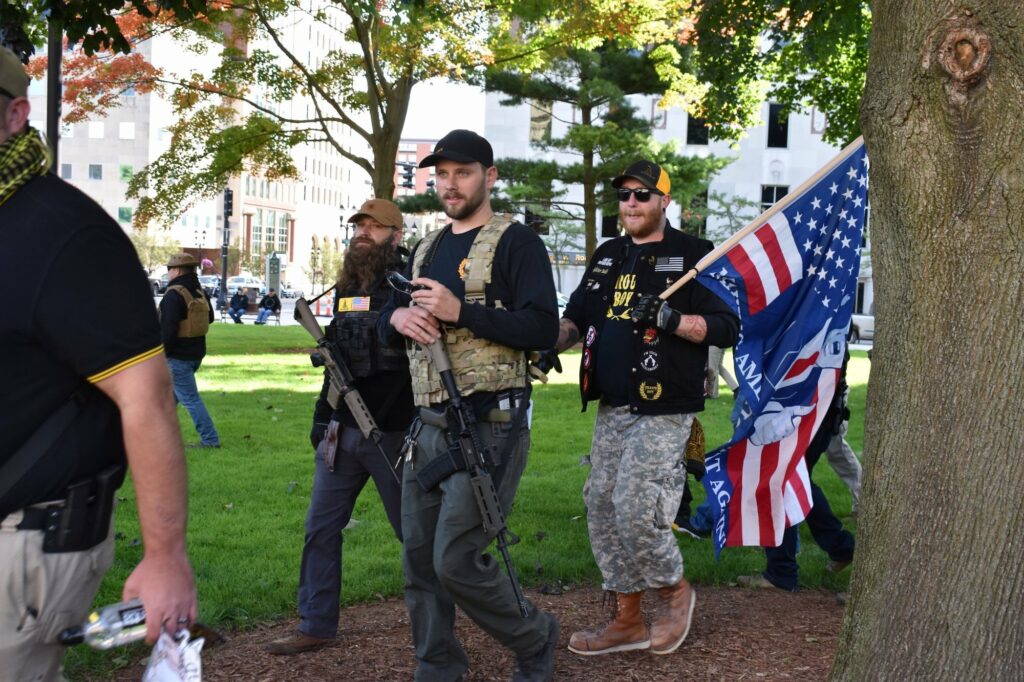 Michigan has made national news for right-wing armed protests at the state Capitol over COVID-19 health orders, such as the April 30, 2020, demonstration that has been called a “dress rehearsal” for the Jan. 6 insurrection at the U.S. Capitol.

Now a new study shows the state had 29 armed demonstrations in the last 18 months, ranking fifth in the nation. The report was released Tuesday by the Everytown for Gun Safety Support Fund and the Armed Conflict Location & Event Data Project (ACLED).

According to Roudabeh Kishi, ACLED’s director of research and innovation, over 3% of Michigan’s protests are armed, 1% above the national average, which is 2%. Armed demonstrations are almost six times as likely to turn violent compared to unarmed protests. These protests are violent or destructive about 16% of the time, compared to unarmed demonstrations turning destructive less than 3% of the time.

“I have remained very vocal about my concerns surrounding open carry at contentious demonstrations — especially at our Capitol,” said Attorney General Dana Nessel, who issued an opinion last year that firearms could be banned from the Michigan Capitol. “This new report shares startling statistics about the increased risk of violence that comes with armed protests, and seeing Michigan among the top states is no badge of honor. My office remains committed to closely monitoring the line between the right to protest and inciting violence.”

Justin Wagner, director of investigations at Everytown for Gun Safety, said in a press release that the prevalence of armed protests “have continued to put our First Amendment rights in jeopardy.”

“Over the past year, we have seen the proliferation of violence at demonstrations across the country,” Wagner said. “The crux of this phenomenon and report is simple: when firearms are involved, demonstrations are more dangerous and deadly.”

In an interview with the Advance, Kishi also said it is also plausible that the intimidation factor of armed protests can make people less inclined to go back and protest, presenting “a relation between the First and Second amendment.”

The report showed that most armed protests were from right-wing individuals and groups, often in response to left-wing protests, including “opposition to the BLM [Black Lives Matter] movement, support for former President Donald Trump, opposition to gun regulations and opposition to [COVID-19] pandemic-related public health restrictions.”

Michigan also has the highest number of armed demonstrations at government buildings, with 11 in the last 18 months according to Kishi. Across the U.S. there have been over 100 armed protests at state capital buildings and vote facilities in 25 states and Washington, D.C.

One of the most widely covered demonstrations was in April 2020. About 20 protestors, some of whom were armed, stood in the gallery while Senate members sat in session to vote on yanking Gov. Gretchen Whitmer’s powers while nearly 600 more demonstrators protested on the Capitol lawn to protest the governor’s COVID-19 rules.

Directly above me, men with rifles yelling at us. Some of my colleagues who own bullet proof vests are wearing them. I have never appreciated our Sergeants-at-Arms more than today. #mileg pic.twitter.com/voOZpPYWOs

Another protest a month later, led by the militia group Michigan United for Liberty, saw about 200 gather at the state Capitol against Whitmer’s COVID-19 response.

About four months later in September, the annual “Second Amendment March” took place on the Capitol lawn, attended by a slew of groups including members from the National Rifle Association (NRA) and the Proud Boys, a self-described western chauvinist group. About 1,100 people attended, and the event even made lawmakers cancel both chambers’ legislative sessions that day.

The report found that 84% of the groups present at armed protests throughout the country are right-wing, including the Proud Boys and Boogaloo Bois. Self-styled militia groups like these are active in over 54% of all armed demonstrations across the country.

Following the armed protests that took place at the state Capitol last year, the bipartisan Michigan Capitol Commission voted unanimously earlier this year to prohibit the open carry of firearms inside the Michigan Capitol building. That came after months of deliberation.

Before the open carry rule was in place, an investigation by the Advance earlier this year found that the state of Michigan was only one of three with no firearm regulations or security measures in place for the state Capitol.

On average, 1,212 people die and 3,507 people are injured by guns each year in Michigan, per the groups. Gun violence also costs taxpayers in Michigan $422.6 million every year.