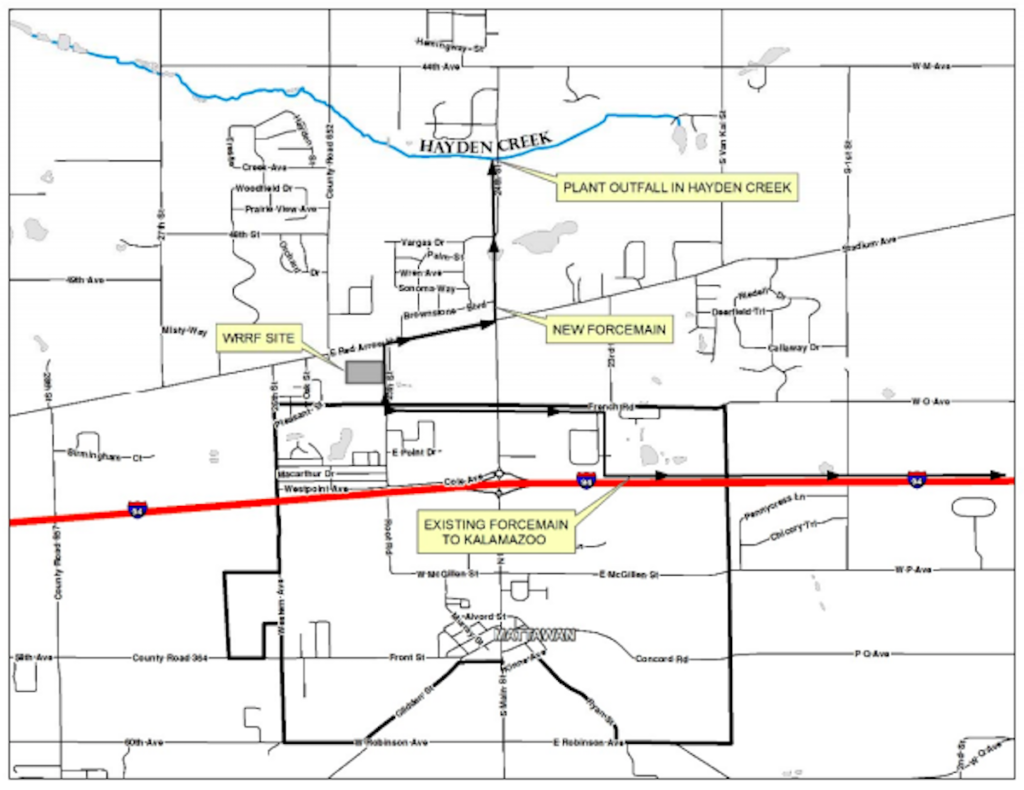 A site map showing the location of a proposed wastewater plant in Mattawan|Feasibility study image, Village of Mattawan and Moore + Bruggink Consulting Engineers

A proposed wastewater treatment plant under consideration by the Village of Mattawan is under fire from a range of critics. Recent village meetings have seen lengthy public comment periods, during which village residents and residents of nearby areas have largely voiced opposition to the plant. Currently, the Village pumps its wastewater to the Kalamazoo treatment system. However, village officials say a six-mile portion of the “forcemain” which connects the two systems requires considerable work to remain in operation.

Rather than replace the forcemain, village staff say it would cost three million dollars less to build a wastewater treatment plant, which the village said will proceed if no other option becomes available, according to a report by WWMT News. The proposed site for the plant sits at the junction of East Red Arrow Highway and 25th Street. It would involve construction of a new forcemain to discharge effluent into Hayden Creek.

Many of the plant’s detractors argue that the plant will have adverse effects on Hayden Creek and the Paw Paw River. According to the United States Geologic Survey and many environmental scientists, wastewater plant effluent can bring chemical and particulate pollutants to a waterway. It can also change the water level and water temperature. All of these factors can then impact the survivability of native wildlife. Several public commenters at recent village meetings argued that Hayden Creek is not large enough to accommodate a plant like the one proposed.

The village has already conducted an environmental impact study, which was published last October. A plant like the one proposed is designed to remove contaminants from wastewater in order to purify it and return it to the potable water system. The removed contaminants are dealt with in a variety of ways. Various technologies can mitigate the environmental impacts from wastewater plant discharges, and some of those measures are described in the village study.

The project would only move forward if fully funded and if its design and construction received all necessary regulatory permits. So far, some funds have been committed to the project. Last fall, State Representative Beth Griffin, who is from Mattawan, announced the state awarded $698,000 toward the design of the proposed plant according to a WKZO report.

Those funds were originally awarded to the village in a 2017 Stormwater, Asset Management, and Wastewater (SAW) Program grant meant to fund work on the existing forcemain. Griffin advocated for the village to be able to use the monies toward the proposed plant instead.

Additional funding could come from the United States Department of Agriculture’s (USDA) Rural Development program, whose staff has been in communication with a number of local governments regarding potential sewage and wastewater projects. Park and Fabius Townships, as well as the Village of Schoolcraft, have all been in communication with USDA staff regarding the federal agency’s current interest in funding such projects.

Several of those in opposition to the plant say they have spoken to the Michigan Department of Environment, Great Lakes, and Engineering (EGLE), which regulates some impacts on streams and rivers, but the agency has not made any rulings on the proposed plant at this stage of the planning process. At the February 8 regular meeting, Village Attorney Scott Graham said more information would become available with respect to EGLE’s role in the process following an upcoming meeting between that agency and the village.

Last fall, in order to move the wastewater plant idea forward, the Village of Mattawan hired the engineering firm of Moore and Bruggink to conduct a feasibility study. That study includes some environmental impact information and puts the cost of the new plant at just over $6.9 million, with other project elements bringing the projected total to $13.5 million. According to the study, the plant would cost about $350,000 per year to operate, totaling seven million dollars over the next 20 years.

All sums combined, the study argues that the total planning, construction, and operating cost of the new plant over a 20-year span would be around $20.5 million. According to the study, replacement of the forcemain to Kalamazoo would cost $23.4 million.

Opposition comes from a range of groups that includes village residents, businesses who fear negative impacts on customer traffic, realtors who say they predict the plant will lower property values and demand, environmentalists who are concerned about impacts on the creek and the river, and residents and officials from nearby jurisdictions that would potentially be downstream from the plant.

In village meetings and in a Facebook group called “Save Hayden Creek,” project detractors have accused village staff of hiding information from village council members and the public. Village officials and at least one village commission member said at the February 8 meeting that information about the proposed project has been available to the public since it was first discussed roughly two years ago.

The village website does contain Village Council and Department of Public Works (DPW) Committee minutes, planning documents, and other material pertaining to the project. Widely publicized pieces of information, such as news reports, do not appear in large numbers prior to last fall in a Google search conducted by Watershed Voice staff.

Attendees at the February 8 meeting expressed dissatisfaction with the online meeting platform’s capacity, which was set at Zoom’s default limit for free sessions of 100 attendees. According to several public commenters, many who wished to participate and make comment were unable to do so because they could not log in to the meeting.

Several such commenters accused the council of being in violation of the Michigan Open Meetings Act (OMA). The act requires that “reasonable accommodations” be made to permit public participation in meetings but does not define “reasonable accommodations” specifically enough to have made it starkly clear whether the village was in violation. Despite having been contacted by village residents after the meeting, the Michigan Attorney General’s (AG) Office appears not to have taken any official action against the village at this time. The AG often defers to local law enforcement to address OMA issues.

In the meantime, the village continues to pursue the project. In January, a third-party environmental review was passed along to the DPW Committee. The Village Council held a status update meeting on January 19, and the topic comes up consistently during public comment periods, even when it is not on the agenda.

For the last few regular village meetings, Graham has taken the lead in providing staff updates and reports on the project status and has spoken to argue in favor of the proposed plant’s viability. At several recent meetings, Village Council member Abigail Wheeler has put forth motions to dismiss the wastewater plant project and cease any further activity on the matter. The majority of her motions have been seconded by Nicholas Kroll, who is the Chair of the DPW Committee. However, these motions have failed to pass. No other Village Council members have supported them.

Another Village Council meeting is scheduled for this evening at 7:00 p.m., and the village has raised its Zoom capacity to 500 attendees. The agenda calls for a DPW Committee report by Kroll, which may or may not include a wastewater plant update. No other items reflect any direct reference to the wastewater plant project. However, if the trend with recent meetings continues, participation by those with views on the plant could include 10 or more commenters, and attendance may be in the hundreds.