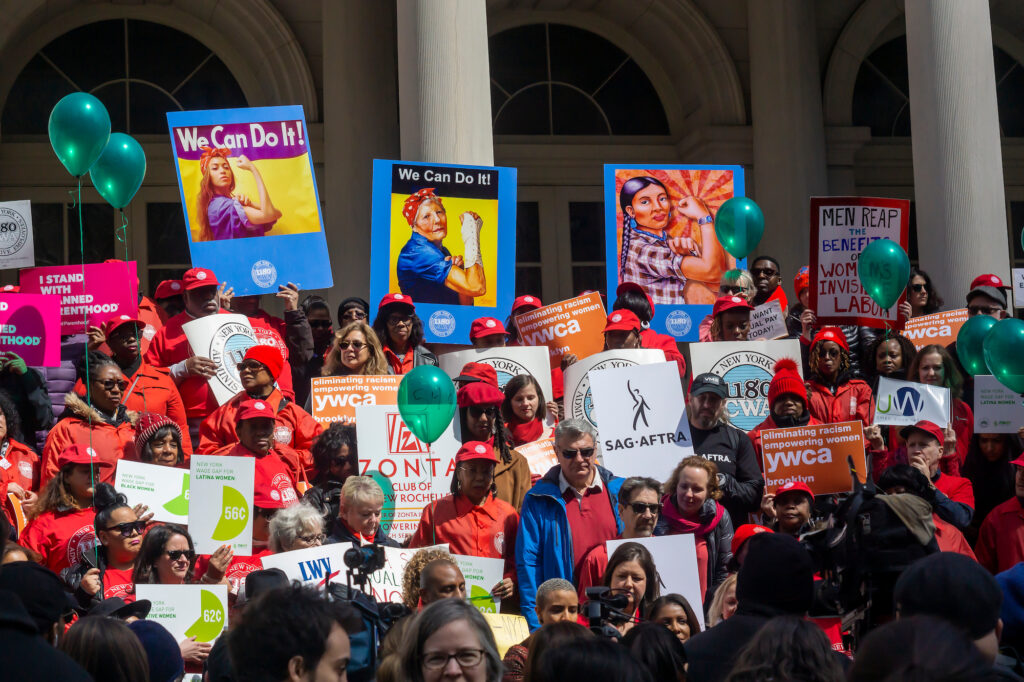 Activists, community leaders, union members and politicians gather on the steps of City Hall in New York to rally against gender pay disparity on Equal Pay Day on April 2, 2019.

On Equal Pay Day, marking the day when white women will have earned the same amount on average as men have at the end of 2020, the Michigan Progressive Women’s Caucus announced a package of bills Wednesday to address the state’s gender wage gap and form a commission on pay equity within the Michigan Department of Civil Rights.

“We have this press conference year after year, and in 2021, it’s unconscionable that we’re still having these same conversations as we stand up and simply call for all hardworking Michiganders to receive equal pay for equal work, regardless of gender,” Pohutsky said.

“Building economic and financial security should be available to everyone, regardless of gender or race; but that has yet to become the reality for working women across our state and nation,” said state Rep. Stephanie A. Young (D-Detroit). “This is precisely why our legislation is such an important stepping stone for efforts to level the playing field and change the discriminatory status quo. It’s long overdue for the Legislature as a whole to step up for the hardworking women of Michigan. Talk is cheap and doesn’t pay the bills, put food on the table or keep a roof over anyone’s head. It’s time for action.”

The bill package would:

“We have had weak and overly narrow laws banning sex-based wage discrimination since 1963,” Pollock said. These laws largely protect employers from responsibility and liability, rather than addressing the problem of sex-based wage inequities. This is why we need the Legislature to pass and the governor to sign the proposed bills discussed today.”

No Republicans are sponsoring any bills in this package. But Pohutsky said she is optimistic that the bills will make it through the GOP-led Legislature because “this is a nonpartisan issue.”

The pandemic has shined a light on some of these gender inequities in the workforce, as women have suffered the majority of pandemic-related job losses nationwide.

“COVID-19 has made these gender wage disparities more clear than ever — and as women continue to bear the brunt of caregiving in this country, the closures of schools and lack of child care are making it even harder for women to make ends meet. Beyond the wage gap, we’re seeing women dropping out of the workforce altogether in order to care for children, elderly parents and others,” MLPP CEO and President Gilda Z. Jacobs said.