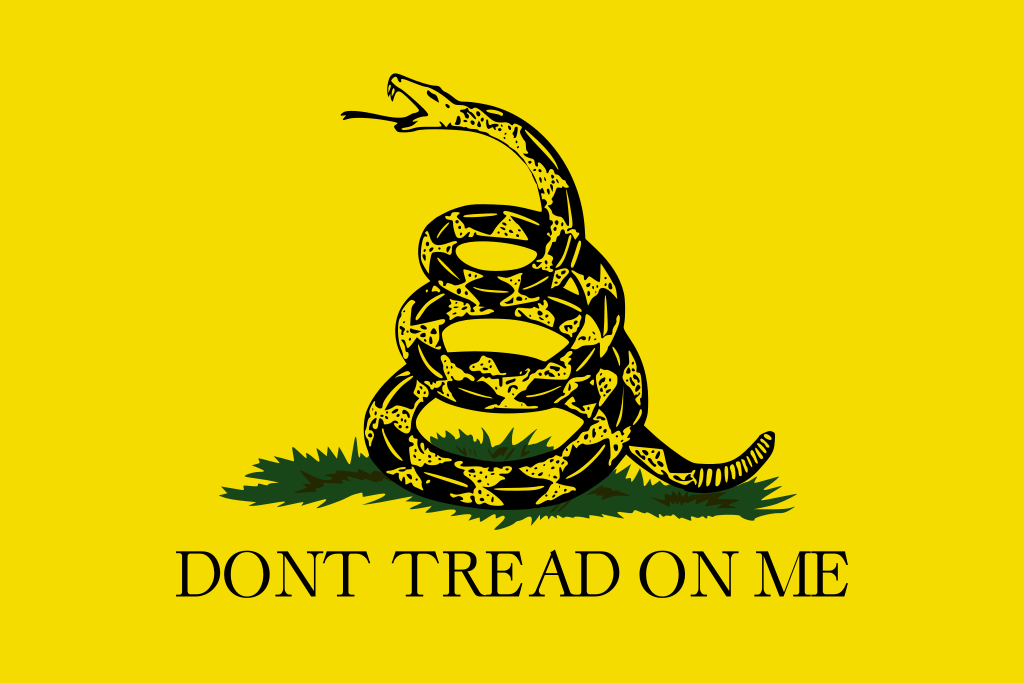 Like the hipster who followed the band before it was cool, in late 2008, I bought a Gadsden flag—you know, the yellow one with the snake on it and the words DON’T TREAD ON ME. That was about six months before the T.E.A. Party made it their unofficial symbol. The T.E.A. (Taxed Enough Already) Party formed in opposition to the 2008-09 economic bailouts and the 2010 Affordable Care Act.

Suddenly I had a flag that I didn’t know what to do with. “Taxed enough already?” Please. I was a college student.  “Taxes” was where Vince Young played football. No, I had bought this flag as an historical novelty, an homage to its first use among Marines in the American Revolution.

It has been said—and don’t ask me by whom—”History doesn’t repeat itself, but it rhymes.” The T.E.A. Party of the Obama years flew the Gadsden flag because they thought they were “rhyming” with the patriots of the Revolution. On April 15, I saw history rhyme again as the Gadsden flag waved at the rally in Lansing in protest of the “Stay-Home-Stay Safe” order.

As a failed poet in my college years, I found that sometimes you have to force the rhyme, and shades of meaning are lost. That is exactly what I would say is happening with the most recent rehabilitation of our American rattlesnake. The origins of the Gadsden flag go back to Benjamin Franklin’s cartoon depicting the thirteen colonies as divided parts of a snake with the message below: “Join, or Die.”  (And yes, I own a version of this flag, too.)

The message was twofold: 1. Unless we join together, everyone is going to suffer. 2. A united America is a strong America. This is, after all, the man who, according to American history fan-fiction, said after the Continental Congress passed the Declaration of Independence, “We must all hang together, or we shall all hang separately.”

No one needs another column appealing for “National Unity®.” People calling for national unity usually are calling for people to unite…behind their candidate, behind their agenda, etc. But what I will say is that the founding generation understood something indispensable: “DONT TREAD ON ME” is useless without “DONT TREAD ON US.”

When that flag first flew, the founders understood that without unity and a period of shared sacrifice, none of their individual rights would matter. The American Revolution entailed real sacrifice: both economically as Britain attempted to blockade and close American ports, as well as a loss of life in the tens of thousands. It also meant individuals and state governments submitting to the wisdom of a Continental Congress that time and again acted in head-scratching and face-palming ways. Regular citizens would fight and die in order to win freedoms that they might never live to enjoy. All this took place not for one or two months, but for the better part of a decade for much of America.

But despite localized resistance, Americans persevered. In 1776, they signed the dotted line of the Declaration of Independence with the words: “We mutually pledge to each other our lives, our fortunes, and our sacred honour.” That pledge was signed with a few signatures in Philadelphia, but sealed in a thousand everyday acts of courage and self-sacrifice.

Who does that sound like in our time? Who has the right to fly the Gadsden flag today? To me, it’s people who are sacrificing their fortunes staying home, even when it means their business is on the line or they are unemployed. It is leaders who are putting their honor and reputations on the line being honest with the public and telling us the truth even when it’s not what we want to hear. It is, above all, our healthcare professionals putting their lives on the line every day for all of us. They have the right to fly the Gadsden flag because they embody the values of sacrifice upon which this country was built, values that have always defined the great moments of our shared American history.

If this leaves you feeling cold—if you are among the many others who can’t go to work, can’t open your business, worry about your livelihood or future as a result of the governor’s orders, who feel TREAD ON, let me say that you need to be a part of this conversation. We in Michigan and beyond need to have a robust, varied, cacophonous discussion of when to “reopen” and more importantly how to reopen. Write or call your legislator or the governor, write an op-ed to Watershed Voice, make yourself heard. But please don’t get out of your car, congregate in large gatherings, and be complicit in offering a staging ground for an invisible enemy who doesn’t care who you are voting for in 2020. Please don’t spread this virus to the many who do not share your political convictions or certainty. When you do that, you are negating all the real sacrifices that so many others are making. You are treading on all of us.

Our leaders in Lansing and in Washington surely will disagree. They, after-all, represent all of us. But this isn’t about them. It’s about you and me. Are we capable of the self-sacrifice that generations of Americans before us have made? Are we going to do our part? Can we still join together to secure life, liberty, and the pursuit of happiness for our fellow Americans now and for generations to come?

James E. Smith is a pastor serving at Trinity Episcopal and St. John’s Lutheran Churches. For comments, questions, or rebuttals, fire off an e-mail at jesmith7770@gmail.com. Prosit!