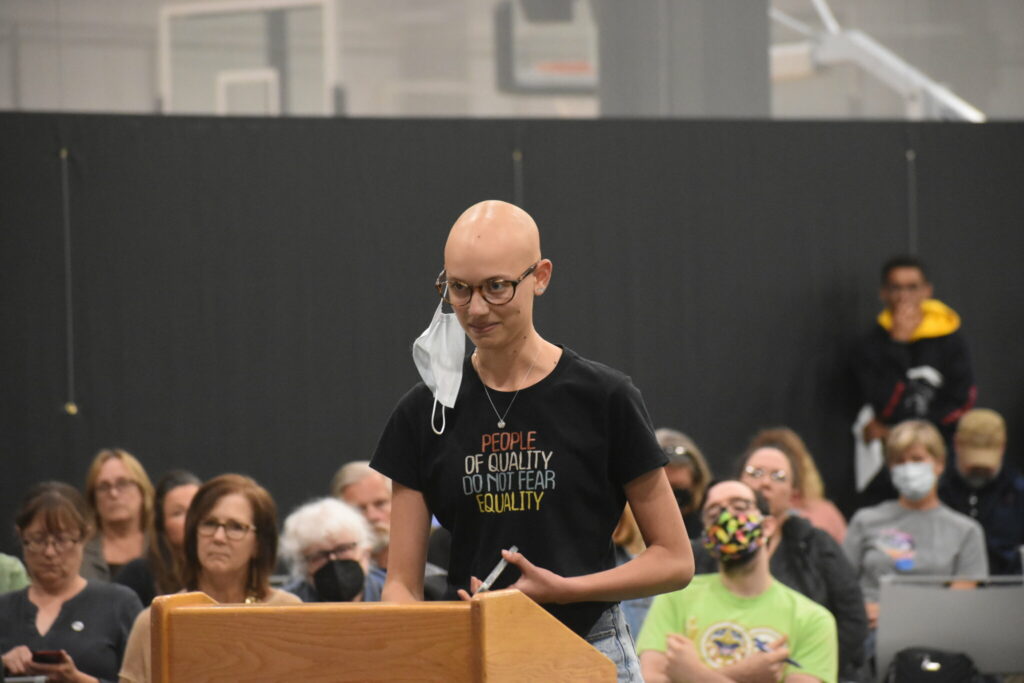 After a student-led Gay-Straight Alliance (GSA) club at Whitehall High School sent out an email to the student body that included resources about sexuality and identity during Pride week, that kickstarted an often-heated conversation in the small West Michigan community about where the line is between schools and families in talking about LGBTQ issues.

Whitehall is a sleepy beach town nestled up against Lake Michigan, with a population of less than 3,000 residents, where it’s common for the high school to make front-page news in the White Lake Beacon, the local weekly newspaper. However, it’s not common that the news is controversial.

But Whitehall has experienced a cultural shift in the last few years, as many rural areas have. The city, which is primarily made up of white, middle-class families, has flipped between the parties during presidential elections since 2012, with a slim majority voting for former President Donald Trump in the 2020 election.

And the school district hasn’t been immune to heightened political tensions.

The GSA hosted a Pride week in April and invited the rest of the student body to participate through events and educational resources.

The student-led group shared the planned events for the week and a list of LGBTQ resources for students and staff members through the school’s announcements, which are emailed to all high school students through the district’s email system.

The test asks questions about an individual’s sexuality, but some parents believed the questions went too far.

“It is not news that we live in a divided country. And it should not be news that those divisions are present in this community just like they are present in any other community,” school board President Doug Ogden said. “We will listen to those concerns. I have every confidence in our board and our administrators, and I think we have 110 of the best teachers anyone could ever ask for. And I have full confidence in their ability to develop curriculum, to teach, to support students and to know what is age appropriate.”

School districts across the country have been embroiled in controversy with their communities in the last year. Some of the issues that parents have taken up have been around mask mandates during the COVID-19 pandemic and most recently with Critical Race Theory (CRT) in school curriculums.

The issue with CRT, which is an academic framework that identifies racism as a social construct embedded in American politics and systems, has largely been pushed by far-right groups and has sparked legislation aimed at prohibiting CRT from being taught in schools, including in Michigan.

As local politics has become increasingly nationalized and culture war issues are constantly litigated in social media, school officials are often caught in the crossfire.

That’s what’s happened in Whitehall. Although the email was drafted by the GSA club, it was sent out by the school’s principal, Brett Westerlund, and included his email signature at the bottom, which many parents read as an endorsement by the school district.

Once some parents found out about the email, they started a group called the Whitehall Informed Parents, which has about 300 members in a private Facebook group. There they led an organized effort to appear before the school board during the monthly meeting and air their concerns that the school has crossed a line.

But Superintendent Jerry McDowell tried to make it clear during a school board meeting Monday night that it was a misunderstanding.

“In this case, the building principal’s support of all students has mistakenly resulted in the interpretation of a school district pushing a particular agenda,” McDowell said. “That’s not the case. … I found that the official’s personal agenda is not a factor at all in this situation. It’s only the care and support of all the kids in this district. That is the goal. That was the purpose. … I believe, without question in my heart and without question in my judgment, that that was the goal.”

The environment at the school board meeting was tense, with impassioned comments from parents angry about the group’s email, students who want a more inclusive curriculum and other parents and community members who showed up to support the GSA and comprehensive conversations about sexuality in the high school.

In the audience was Damian Harsch, 17, who is gay and was a member of the GSA until he graduated from Whitehall last month.

“I felt more safe in a room full of kids my age calling me slurs than I did in that room full of adults,” Harsch said.

Harsch said they knew they were gay since the fourth grade, but held back from coming out to the school community until their senior year, which they did virtually due to COVID-19.

“I knew a lot of kids at my school were severely, severely conservative, and I guess just not having to actually go into school had given me the confidence to be able to come out,” Harsch said.

‘A heckler’s veto is not reason to prohibit’

The public comment portion of Monday’s school board meeting was filled with screaming voices, uproars of applause and six school board members facing the dozens of attendees just trying to get control of the meeting at various points.

Tim Cross, a Whitehall parent and the senior pastor at Living Word Michigan, spoke to the board and said the material sent to students was “pornographic.” He argued there needs to be consequences for the email.

Cross also stated that he believes the GSA club receives special attention from the district than religious groups, namely the club he leads called Men and Ladies of Honor.

Jay Kaplan, the staff attorney for the LGBT project of the American Civil Liberties Union (ACLU) of Michigan, said that a group of parents cannot dictate the decisions of the district and the school has the right to own the autonomy of its curriculum and clubs.

“But a heckler’s veto, somebody who doesn’t like something, is not necessarily a reason to prohibit,” said Kaplan. “Committees are always going to weigh in on issues, as they should and as they have a right to do so. And some of the people behind this, they feel a tremendous sense of grievance, that it’s always their rights being threatened because you’re showing tolerance and acceptance for somebody else.”

Supporters of the LGBTQ community are concerned that this backlash from some members of the Whitehall community will have a negative impact on students in the district, especially those who are working toward creating social change.

Jamie Erdheim, the sexual violence prevention program coordinator at the Michigan Organization on Adolescent Sexual Health (MOASH), an organization aimed at supporting youth around topics of sexual health and identities, says that what’s happening in Whitehall isn’t necessarily unique when it comes to GSA clubs.

Erdheim said that it’s not uncommon for adults in the communities to push back against some of the changes that GSA clubs work to create in schools.

“Youth are the ones that started GSAs and the pushback has almost always been from adults,” Erdheim said. “It usually is this vocal minority of parents that don’t want their kids doing XYZ or they don’t want to be seeing XYZ.”

Harsch said the most frustrating part of the school board meeting for them was the “infantilizing of their children who are high-school-age.”

“We aren’t even kids anymore. We’re a step closer to being full blown adults. We know the things that are going on, especially with phones now. We can look anything up at the touch of a button,” they said. “The fact that people like that are trying so hard to shelter them from specifically gay and trans media is so telling of their character.”

‘A lot of people insinuated that being gay was inherently predatory’

This isn’t the first time in Michigan that a GSA club has received backlash from the community, especially as it pertains to religious beliefs and the allegations that there is sexualization of children happening in schools when discussing LGBTQ issues.

In January 2018, a group of religious parents in a Lansing suburb sued the Williamston High School Gay-Straight Alliance after the school district adopted policies outlawing discrimination against any student based on sexual orientation, gender identity or gender expression. The parents alleged that the policy violates the privacy and religious rights of cisgender parents and students.

The lawsuit states that the crux of the parents’ claim is that the policies  “promote  and  force  the  approval  of  alternate  sexual  lifestyles  and behavior” in  a manner that infringes upon the parents and their students’ personal identity, autonomy, and “their sincerely held religious beliefs and convictions and constitutional right to oppose such policies and freely speak out on such issues in accordance with their sincerely held religious beliefs.”

The ACLU of Michigan stepped in to intervene on the behalf of Stand with Trans, a non-profit organization aimed at empowering the families of transgender youth, and the Williamston High School Gay-Straight Alliance.

The case was dismissed in October 2020 after the court found that the policies did not harm any children in the district.

While the situations in Whitehall and Williamston are different, there are some similarities in how the parents talked about not being against GSA clubs, but contradicted that by using anti-LGBTQ language.

For example, the Williamston GSA lawsuit states the parents allege they do not “oppose or demean any person for who they truly are as a person,” but then did not accept the GSA’s existence in the district.

In Whitehall, throughout the four hour-long school board meeting, most of the speakers who were upset with the district noted that this was not an issue against the LGBTQ community or the GSA club, but rather an invasion of the school into personal matters and a lack of transparency.

However, many of the parents stated that they thought the resource list, especially the sexual orientation test, amounted to sexual exploitation of their children.

The LGBTQ community is often stereotyped as overly-sexualized, with people equating LGBTQ people with perversion or predatory behavior. This has manifested in state and local laws in recent years banning transgender people from using the bathroom that correlates with their gender identity or much of the homophobic rhetoric that was common during the AIDS crisis in the 1980s.

Young people are leaders in how society is changing, especially in how society relates to historically oppressed groups, like the LGBTQ community. The U.S. Supreme Court in 2015 ruled that same-sex marriage is legal and last year confirmed that LGBTQ people are protected from workplace discrimination. Because of this, schools, communities and families are figuring out where they stand during this societal shift.

“With LGBTQ [rights], we have some more visibility … and with visibility always comes more backlash,” Erdheim said. “And I think that the adults who are kind of feeling threatened by all that visibility, feel even more inclined to participate in the backlash.” HELP US GROW Make a tax-deductible donation.