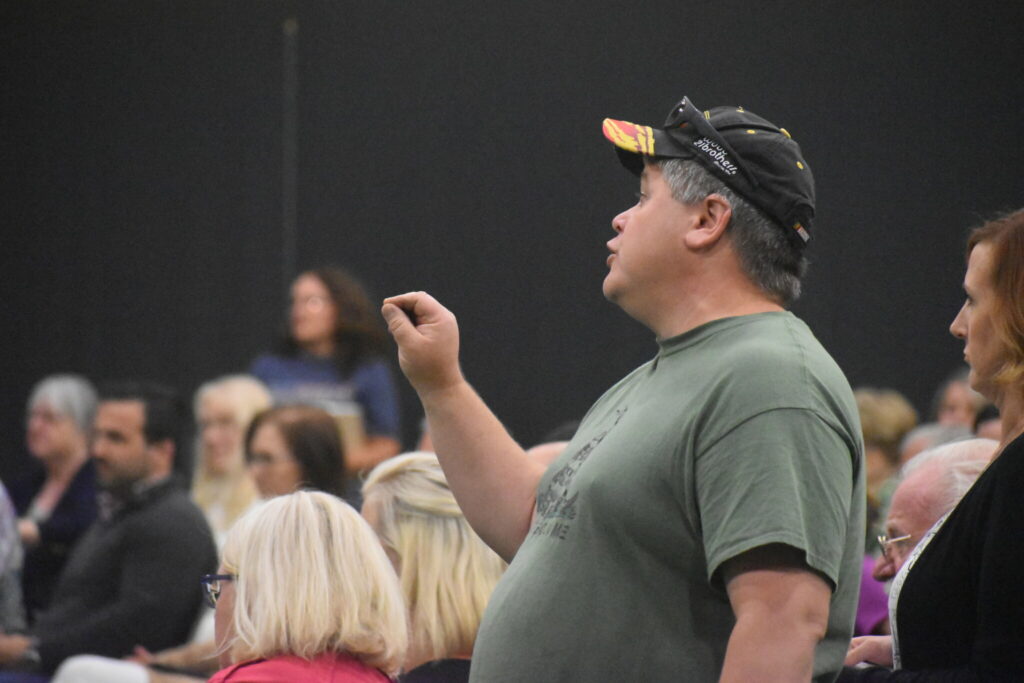 School board members in Michigan — volunteers who are typically parents or former educators — are facing unprecedented pressure and scrutiny as a third school year dawns during the COVID-19 pandemic.

Unlike last year, Michigan does not have a statewide mask mandate, leaving the decision in the hands of county health departments and local school boards. School officials have dealt with threats and parents angry over COVID safety measures, as well as social issues like racial justice and LGBTQ+ rights.

“It is never OK for someone to make a threat of physical violence against anyone else, especially someone who is working so hard, putting in tireless hours to keep people safe. They’re just doing their jobs and we need to give them our respect and our support. And we need to give one another a little bit of grace,” Gov. Gretchen Whitmer said Thursday.

But it’s not just happening in Michigan. And the effort is being fueled by viral videos, social media groups, Republican leaders and right-wing media that are targeting school boards over Critical Race Theory and mask mandates.

That’s led to several clashes in what used to be sleepy school board meetings. During a Birmingham Board of Education meeting last month, a man flashed a Nazi salute and chanted “Heil Hitler” in response to a Jewish woman and a Black woman expressing support for the mask mandate, which gained national attention.

Board President Lori Ajlouny repeatedly ordered those in attendance to “stop disrupting the meeting” and that requiring masks is for the “safety of our children.”

Michigan Association of School Boards Executive Director Don Wotruba fears for the health of board members in the midst of “facing threats, ugly language in meetings and the abuse nobody signed up for.”

“I think that the biggest problem that I see for our members is the lack of civility from the public about really tough decisions that volunteer school board members are trying to make for people on both sides of the issue,” Wotruba said.

“I empathize with parents who don’t like what’s happening, but our board members are not experts, so they turn to those health department experts for guidance to do what is best for the public,” he added.

As an elected leader responsible for serving the district, I can’t take Google research over the advice, facts and data from the county, state and country.

There are currently 229 school districts that have a mask requirement, protecting more than 757,904 students, or 60.5%, per Whitmer’s office. And at least 15 county health departments in Michigan currently require masks to be worn by students from kindergarten through 6th grade, as most are too young to be vaccinated.

It’s not just school board members who are receiving hateful and disruptive responses from residents and even those outside the state.

Two Genesee County medical health officers reported death threats by phone from someone speaking against the countywide mask mandate for K-6 students, teachers and staff. Some people, including House Oversight Committee Chair Steven Johnson (R-Wayland), have blasted Allegan County health officials for letters to parents whose students may have been exposed to COVID.

“We should be supporting our public health officials in protecting our kids and communities, not berating and trying to stop them from doing the important job of helping to keep us safe and healthy,” said Linda Vail, chief health officer for Ingham County.

There’s now a statewide petition to strip local and state health officials of authority to handle crises like COVID-19. The right-wing group circulating it, Unlock Michigan, successfully overturned a 1945 law Whitmer used early on in the pandemic to issue health orders. Under Michigan law, the Legislature can approve citizen-led petitions before it goes to a statewide vote — and the governor has no power to veto.

In Oakland County, Farmington Public Schools Board of Education’s plan to require masks evolved as more information became available and eventually aligned with the health department’s mandate, requiring students from kindergarten through 12th grade to wear masks indoors, according to board President Terri Weems.

“We’ve done our best to make our meeting accessible for public comment and last year, the volume of public comment was extraordinary,” Weems said. “We encouraged people to write in their comments, so we dealt with opposing views about in-person versus virtual learning and masks.”

During the 2020-21 school year, the board met in person for meetings without the public to maintain safety and social distancing, Weems said.

“At our first meeting this year with people attending in-person, some folks were angry and some folks had lots of questions, did not appreciate our position or were misinformed about who made the decisions,” Weems said.

“It’s been tough to be a board member in general,” Weems said. “Our board members, myself included, have found a new appreciation for the role of a school board member working under distress with all the dynamics and politics that come into play.”

As a parent, Weems empathizes with other parents about their concerns for their child’s safety and comfort level during the school day while being required to wear masks.

“As an elected leader responsible for serving the district, I can’t take Google research over the advice, facts and data from the county, state and country,” Weems said.

With the Ottawa County Health Department issuing a mandate requiring students under 12 to wear masks in school, that meant local school boards didn’t have to make the call.

“When the health department mandates it, we will be following that,” Jenison Board of Education President Amanda Peterman said. “It takes some of the pressure off of us as a board.”

Peterman said their board meetings have been “respectful despite differing opinions.”

“It’s no surprise that we have passionate community members sharing personal perspectives on appropriate protocols,” Peterman said. “We got that last year and it’s no different heading into this year.”

This year, Peterman and her fellow board members are prioritizing open communication and “regularly sharing the ‘what’ and the ‘why’ behind changes” in decisions about schools and COVID-19 safety protocol.

“The community can handle the changing course if they know what’s going on,” Peterman said.

George Heitsch, the former interim superintendent for Birmingham Public Schools who recently stepped down in June, described his experience with the school board at the start of the pandemic.

“There was a lot of uncertainty about what was true and not true and our meetings were virtual so we didn’t deal with the mask discourse in-person,” Heitsch said. “Now, the complexity of decision-making has become more difficult, with so many pieces we can’t completely understand.”

Heitsch said that it was a challenge to serve during an emotionally charged time.

“It becomes such a personal thing for every adult involved and they’re just looking out for what’s best for their kids,” Heitsch said. “The drama of it all is so often fear-based. Emotions take control and logic doesn’t always matter at that point.”