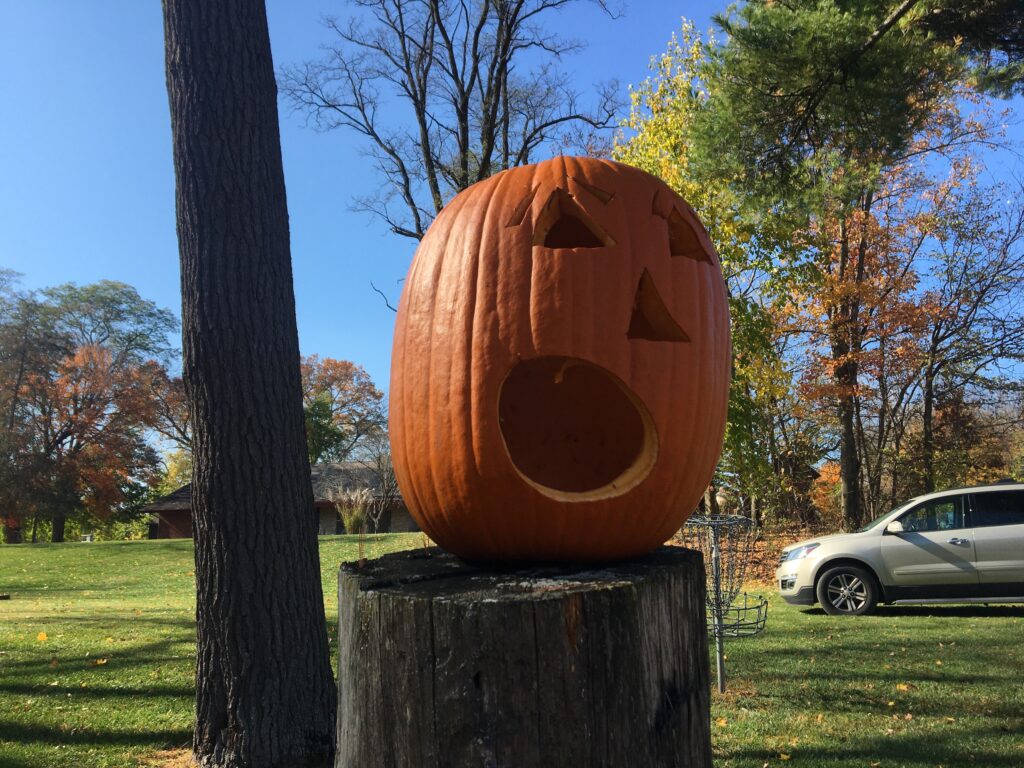 A “Trunk-or-Treat” event at YMCA Camp Eberhart took place this weekend, drawing several hundred carloads of trick-or-treaters. Families came in vehicles of all kinds from St. Joseph County, surrounding counties, and northern Indiana to take part in the socially distanced Halloween event. Roughly 40 organizations and private individuals hosted “trunks,” wherein they passed out candy to the families that came from the trunks of their vehicles. Some set up elaborate Halloween displays.

Camp Eberhart sits on the northwest side of Corey Lake, near the very western edge of St. Joseph County. Upon arriving at the camp’s entrance on County Line Road on Saturday, participants lined up in their vehicles on the dirt driveway. As they reached the camp’s gate, they received programs with maps of the one-way driving loop through the grounds. Participating “trunks” were lined up along the driving route. At each trunk station, volunteers passed out treats via open car windows and van doors.

Eberhart’s Executive Director, Katia Martin, said she was extremely happy with how the day was going when Watershed Voice spoke with her, roughly halfway through. “I see lots of candy. That’s what we wanted,” Martin said. “It’s a beautiful day. We couldn’t have asked for better weather.” Martin is in her third year at Eberhart, but she has been with YMCA camping for 20. “We’ve had people from everywhere. They seem happy and pleased. The line seems to be moving well. I’ve asked, and there have been no complaints.”

Soon after the event got underway, Martin said, the line of cars waiting to get into the event was backed up all the way down Camp Eberhart drive to County Line Road. “Oh, my goodness,” Eberhart Office Manager Lisa Vaillencourt said. “I got a phone call saying, ‘traffic’s backed up, let ‘em through!’ We’re blessed today. Everyone seems to love it.”

A participant later told Watershed Voice staff that when she was waiting in line, the line of cars backed up nearly to Coon Hollow Road. Prior to the event, Eberhart staff told trunk hosts to expect up to 300 cars, with multiple children in most.  Watershed Voice gave away 360 pieces of candy supplied by its own staff before it began providing candy provided by other event sponsors.

Shanna Johnson, who cosponsored the event with Rob DuFour of ReMax/Elite Group and Holley Bloomfield of Title Resource Agency, said she always puts on a Trunk-or-Treat event. Under the unusual circumstances of this year’s pandemic, she said, things had to be different. Johnson said she is friends with Eberhart’s nurse, who put her in touch with Martin. Johnson and her colleagues arranged to have 700 pounds of candy donated for the event, which she said equated to 40 extra trunks’ worth.

Johnson, DuFour, and Bloomfield were on hand with other colleagues in Mario character costumes to pass out candy near the Corey Lake shoreline on Saturday afternoon. “Kids are my thing,” Johnson said. “they’ve had enough taken away this year.” In light of current circumstances, Johnson said she was happy to have helped with the event.

Other participants agreed that the event was a good one for children. Bridgitte Romanelli of Edward Jones said the event was “such a great idea for the kids.” Kristy Shimer with John Schragg State Farm Insurance said, “it’s been fantastic. I love seeing the faces. The kids are happy to be able to do it, the parents seem relieved, and it’s great for them to have something to look forward to.”

Shimer said her agency decided to participate in the event nearly two months ago in order to give back to the community. “It’s definitely not the same as when we were kids,” she said, “but it’s something. It helps give us a sense of normalcy, and we’ve got to keep going. As long as we can give back and see some smiling faces, that’s what matters.”

Erica Hensley brought her family out to represent her employer, Omni Credit Union. Her husband and four children dressed as the Scooby-Doo gang and decorated the family’s minivan accordingly. Her husband, Larry, said the inspiration came from the fact that the couple’s own kids watch the show “nonstop.” Larry Hensley echoed Shimer’s sentiments. He said it was great to see “kids’ smiling faces” at the event.

Joining the variety of businesses and individual families on hand were a number of local community agencies. They included Community Mental Health, Commission on Aging, Constantine and Fabius Park Fire Departments, among others. Three Rivers Public Library was on hand passing out its newsletter, comics, and candy.

There were also several community groups and churches. Abbi Horn joined other volunteers from Corey Church of the Nazarene to pass out candy to Trunk-or-Treaters. Horn said there were “tons of people” participating in the event, and she was happy “seeing people smiling, laughing, and chatting after being cut off for so long.”

Nearby Camp Wakeshma also participated in Saturday’s event at Eberhart. “It’s amazing. We love it,” said Wakeshma’s Emily Milnamow. “It’s been a great way to get involved with the community.” Pat Conway, who is President of Wakeshma’s Board of Directors, said some usual events that his organization participates in did not happen this year, “so we’re grateful now more than ever” to be able to participate in Saturday’s event.

It was Martin’s daughter, Emmalee Jo, who came up with the idea for the Trunk-or-Treat event. In a conversation with Watershed Voice last week, Martin said Emmalee Jo “was lamenting a month ago that there wasn’t going to be any trick-or-treating. She said, ‘I wish we could do trunk-or-treat at camp,’ so it really came from the mind of a 10-year-old, which is really exciting.”