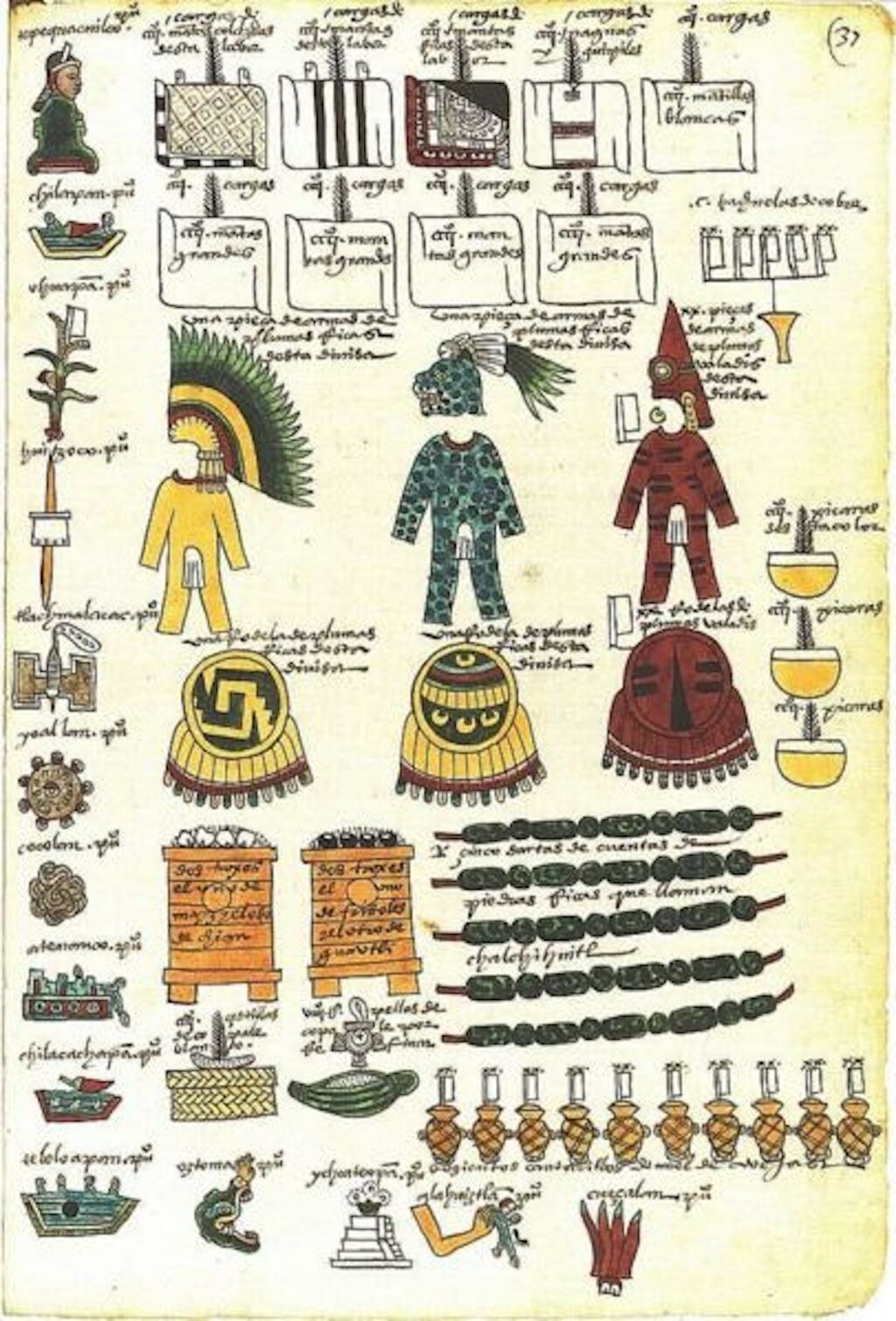 Pictured is a page from an Aztec Codex called the Codex Mendoza, (folio 37, recto) written around 1541, in part documenting tribute being sent by towns to the emperor Montezuma II.

Every year I grow at least one new plant in my garden. It’s usually a random grab, whatever fun, new vegetable I happen across at the greenhouse. I pluck up two or three of the little fellows, toss them into a tray with ridiculous numbers of tomato and pepper plants, and away we go to find them a happy little home in my garden. One year it was peanuts (greatly enjoyed by the moles), last year was kohlrabi (greatly enjoyed by me).

This year I’m trying amaranth, and since the “approximate seed count” in the bag is 1,200, I won’t be growing just two or three. To be honest, I’m not entirely sure what I’m getting myself into with this adventure. And it will be an adventure. There will be the anticipation of planting, excitement as new sprouts poke up out of the ground, frustration of trying to determine weeds from plants, swear words flying in anger as my chickens inevitably discover the plants, and, always, the uncertainty of when to harvest and how to best preserve and cook it.

I’ve never eaten amaranth before, maybe I should try it first? It’s related to quinoa, and I like quinoa – I’m sure we’re good, right? What’s the worst that could happen, I spent a season growing chicken feed? I’m OK with that.

Similar to quinoa, amaranth is a gluten-free, cereal-like grain high in protein and lysine. The plant itself is about 6 foot high on average, with edible leaves that taste like “sweet, but spicy spinach” and seeds that can be cooked or made into flour. The seed packet claims the plant is very drought tolerant and will grow in most soil types. I can handle that.

Yet while quinoa has gained a broad foothold in health food sections of your grocery stores, amaranth is rare. Why? I’m not sure. In 1975, the National Academy of Sciences listed it as one of the most promising, yet underexploited crops, with the potential for addressing world hunger. The National Research Council returned to the issue a decade later, noting the nutritive value and potential for amaranth as a crop. So, it’s not even like amaranth is a “newly discovered” ancient grain.

And now we get down to why I really want to grow this unlikely, and hopefully tasty, crop. Amaranth IS ancient. Archaeology meet gardening. While much ado is rightly made about the impacts of maize (corn) agriculture (and beans, to a lesser extent) to early American cultures, amaranth is the forgotten child in the mix. The grain was domesticated roughly 6,000 years ago, and was so important to Aztec society that territories sent literal tons of amaranth to the emperor as tribute. It was also grown by native peoples in the southwest and central United States.

What happened? Why don’t we have commercials touting marshmallow-filled, sweetened amaranth cereals with cartoon characters singing obnoxious little ditties? In short, the Spanish. Paste and dough made from amaranth flour were important parts of ceremonial and religious traditions of the indigenous peoples of the early Americas. As the native communities were decimated and forced to convert to Christianity, use of amaranth also diminished.

So, this summer, while I’ll still have too many tomato and pepper plants, I hope to also wade through a field of tall, gorgeous red-leafed plants, waiting on the seeds to develop, bringing a little of that past into my present. I don’t know how this adventure in gardening will turn out, I could completely screw everything up. You never learn if you don’t try though, and the journey is sometimes more fun than the destination.

Amy East is a freelance copyeditor, wannabe homesteader, and recovering archaeologist living in Cass County. She loves her family, her menagerie of animals, and her garden, although depending on the day, the order of those may vary.